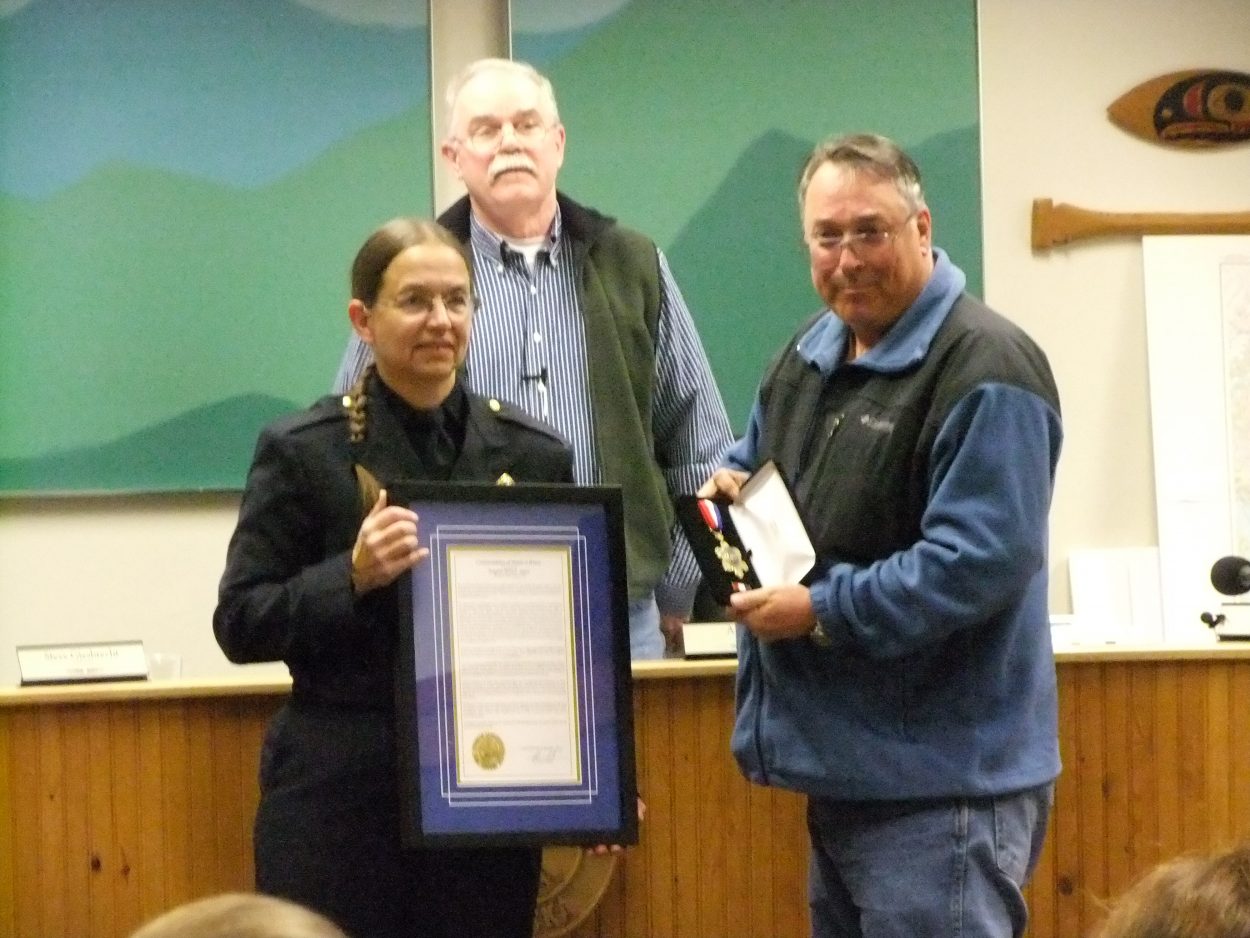 Petersburg police sergeant Heidi Agner was honored at Monday night’s city council meeting with the department’s first medal of honor. The council also discussed other local threat responses in the community and promotion of a Petersburg borough.
For iFriendly audio, click here:
Petersburg mayor Al Dwyer presented a medal of honor award, the first of its kind for a Petersburg police officer, to Heidi Agner. She was nominated for the honor by her co-workers for her work in a standoff with a man who allegedly fired an assault rifle at police. 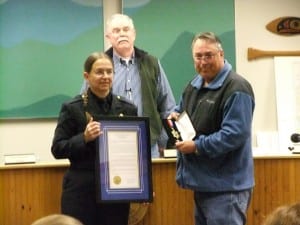 “After successfully stopping him from entering a populated area with a roadblock, you took the lead in confronting him, engaging him in conversation and using your skills as a trained negotiator in getting him to eventually surrender,” Dwyer read from the commendation. “You exposed your position by shining a light on him, lessening the risk of your fellow officers and placing yourself in extreme personal danger during a confrontation that lasted about an hour. During this time he was aiming his rifle at you, you and your coworkers would have been unquestionably justified in using deadly force against him.”

30-year-old Jace Cunningham is facing assault and other charges from the incident October 4th on Frederick Point road. He’s pleaded not guilty to the charges and has a court appearance scheduled for later this month.

Meanwhile city manager Steve Giesbrecht reported on the local police response to a report of an armed man October 28th threatening to kill police and others downtown. Officers evacuated the patrons of Kitos Kave bar early that morning because they believed the man was headed there. Giesbrecht told the council he followed up on that incident with police chief Jim Agner and Petersburg mental health’s Kim Kilkenny.

“We had an alleged threat against a person and a threat against any officer that might be present,” Giesbrecht said. “Chief Agner and I met with two of the bar owners and Kim Kilkenny joined us by my invitation just to kind of discuss what happened, what we could do better, what’s kind of going on a little bit. I think we came to agreement on some communication issues that might help down the road but it doesn’t necessarily explain why folks have this overwhelming urge to shoot guns here in town particularly at police officers so. We’re going to continue to try and work on some of that and get some pressure off Jim and his folks.”

24-year-old Derek Knudsen faces assault and weapons charges in that case. He too has pleaded not guilty to those charges and has a court appearance scheduled in January.

In other emergency response, city staffers also reported on their efforts to find out about a tsunami warning following a large earthquake off the coast of British Columbia October 27th. Councilor Sue Flint said she did not see a tsunami warning message on television and wondered why. Fire and EMS director Sandy Dixson said the police department heard from other local residents who did see a television warning message. Dixson said she worked with police chief Jim Agner to track down more information.

“His dispatcher was fielding a lot of calls as was sergeant Agner and Jim and I were trying to gather information by calling other departments other city entities to find out what effects they were getting or what information they had and we discovered that the coast guard was giving inaccurate information so we called the coast guard to tell them they weren’t ready the appropriate information and it was determined we didn’t have an emergency in our area,” Dixson said. She said local authorities were ready to alert people in the event of a tsunami and she and police chief Agner both reported conflicting information about the possibility for a tsunami in Petersburg that night.

In other council action, the council approved an ordinance re-affirming 15-thousand dollars of city money to be spent on promoting borough formation. Councilor John Hoag asked that the money be spent as much as possible on getting out relevant facts to voters. “I’ve got a little bit of philosophical disagreement with just signs or what I call feel-good posters as nice as they may look,” Hoag said. “I think one of the most important facts to get out for those people who are going to be out of town according to state statute if they don’t have a forwarding address given to the state elections division they’re not going to get a ballot.”

In related news, city manager Giesbrecht explained the city has put up pro-borough signs on city property and has removed anti-borough signs from the same sites. Opponents of the borough are asking why tax dollars are only being spent to promote the borough and not to give the opposing view. “You know the way this ordinance reads its basically the city has the right to put material on our property and the right to say no other things can go on our property,” Giesbrecht said. “We did run that by the city attorney to make sure we were correct in our interpretation of that. They have confirmed that and like I said at this point we’ve got them in about a half dozen places and have told the folks they cannot put no borough signs there.”

The section of city code cited by the attorney spells out local law on littering. It’s title “posting notices on public structures prohibited.” And it reads “No person shall post or affix any notice, poster or other paper device calculated to attract the attention of the public to any lamp post, public utility pole, or shade tree or upon any public structure or building except as may be authorized or required by law.”

Councilors also approved a new year-long contract for the city’s lobbyist in Juneau for 36-thousand dollars. The council finished up the night with a closed-door executive session on the city’s bargaining positions for upcoming negotiations with power and light employees represented by the International Brotherhood of Electrical Workers.