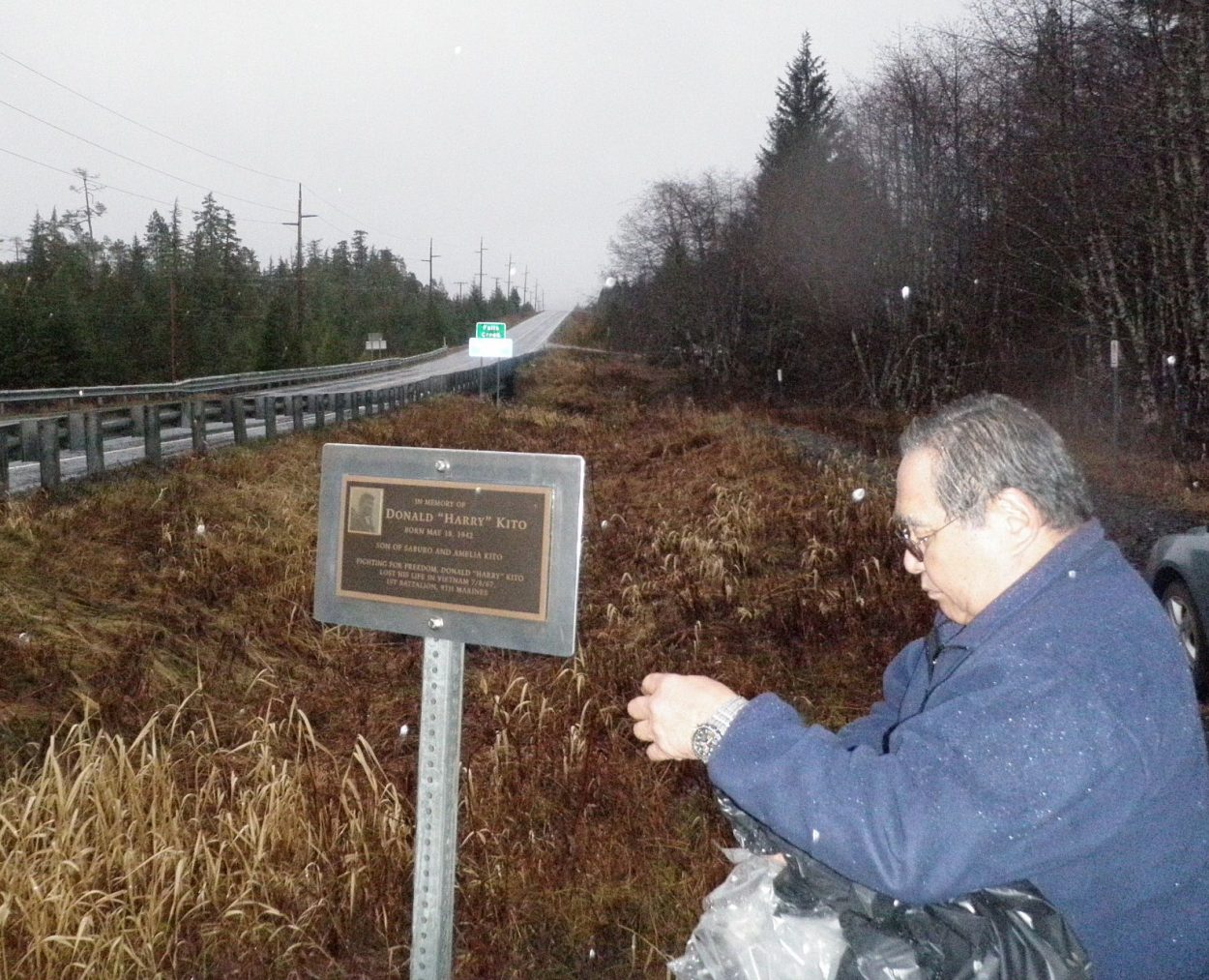 Family, friends and the community turned out on Veterans Day to dedicate a bridge south of Petersburg in honor of Donald “Harry” Kito, a U.S. Marine killed while fighting in Vietnam in 1967. Kito was remembered for his smile and the life he gave to his country just decades after his Japanese-American parents were sent to an internment camp during World War II.
For iFriendly audio, click here:

A crowd gathered at the side of Mitkof Highway south of Petersburg as John Kito of Anchorage welcomed the community in a cold November downpour. “Testament of my brother’s value to this community of Petersburg is here with everyone who has come out on this wonderful Petersburg day to honor the bridge that was dedicated to him through the legislative process and you as a community,” Kito said. 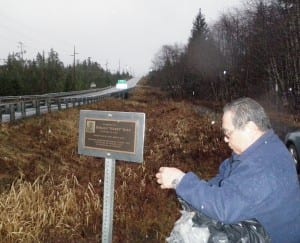 Legislation naming the bridge at Falls Creek, about 10 miles south of Petersburg, passed the legislature last spring. The bill also named other Alaska bridges and airports and was sponsored by state representative Bill Thomas of Haines. “I did a tour of Vietnam in 1968 and turned 21 when I was there for six months,” Thomas said. “I came home got elected. I’m co-chair of the Veterans caucus and I’ve had many friends who’ve committed suicide since then and I’m very sympathetic very heartfelt for the veterans. I know the sacrifices the made whether they made it through the war and come home.”

Also helping the bill through the legislative process was State senator Bert Stedman of Sitka. He grew up in Petersburg and remembers the day Kito’s body was returned home. “I can’t remember not knowing the Kito family and I happened to be on the dock at the airplane float a little boy of 11 when they brought Harry home,” Stedman recounted. “The Marines got out in full dress uniforms and flags and marched with Harry up the dock when they brought him to town. And I didn’t know who it was they brought back to the community until I got back home and asked my parents and I’ve never forgotten that day.”

Kito’s parents were taken from Petersburg and interned at a government camp in Puyallup, Washington during World War II. His father was a Japanese immigrant, and his mother was a Tlingit speaking daughter of a Japanese immigrant. Harry Kito was born May, 18th 1942 in Tacoma, the first baby born to that population of Japanese Americans taken from their homes and held in the Puyallup internment camp.

“You know it’s just remarkable to look back over, cast back over history and think about our little Harry and his family and his return here and then growing up in this very, very loving community toward children and toward families and going off to Vietnam on behalf of our country,” sister Amelia Kito Gage of Sitka reflected on that history during an interview at KFSK. “We just feel strongly that that history is rich and we’re proud of what he did.”

The 25-year-old Kito was a Lance Corporal and part of a communications platoon in the first battalion in the ninth Marine regiment when he was killed by an artillery round July 8th, 1967 near Quang Tri Vietnam. His fellow Marines say they lost several platoon members during that week. Four of them made the trip to Petersburg for the bridge dedication. John Crew of Mill Spring North Carolina remembers Kito for his smile. “Harry had just a smile always,” Crew said. “It didn’t matter if it was a bad time or a good time. He had a smile on his face.”

The Marines say they still get together at least twice a year. For them Veterans Day is a chance to remember Kito and the other platoon members lost in the war. The trip to Petersburg is a chance for them to mourn, to get to know the family of their fallen platoon member and to get some recognition for service that did not happen when they came home from fighting. The four Marines from out of town joined the family and community at Sunday’s dedication and thanked the community for its hospitality.

The ceremony ended with sister Amelia Kito Gage offering a blessing of the bridge as the family unveiled a plaque nearby. 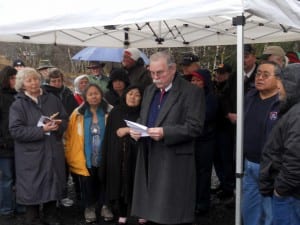