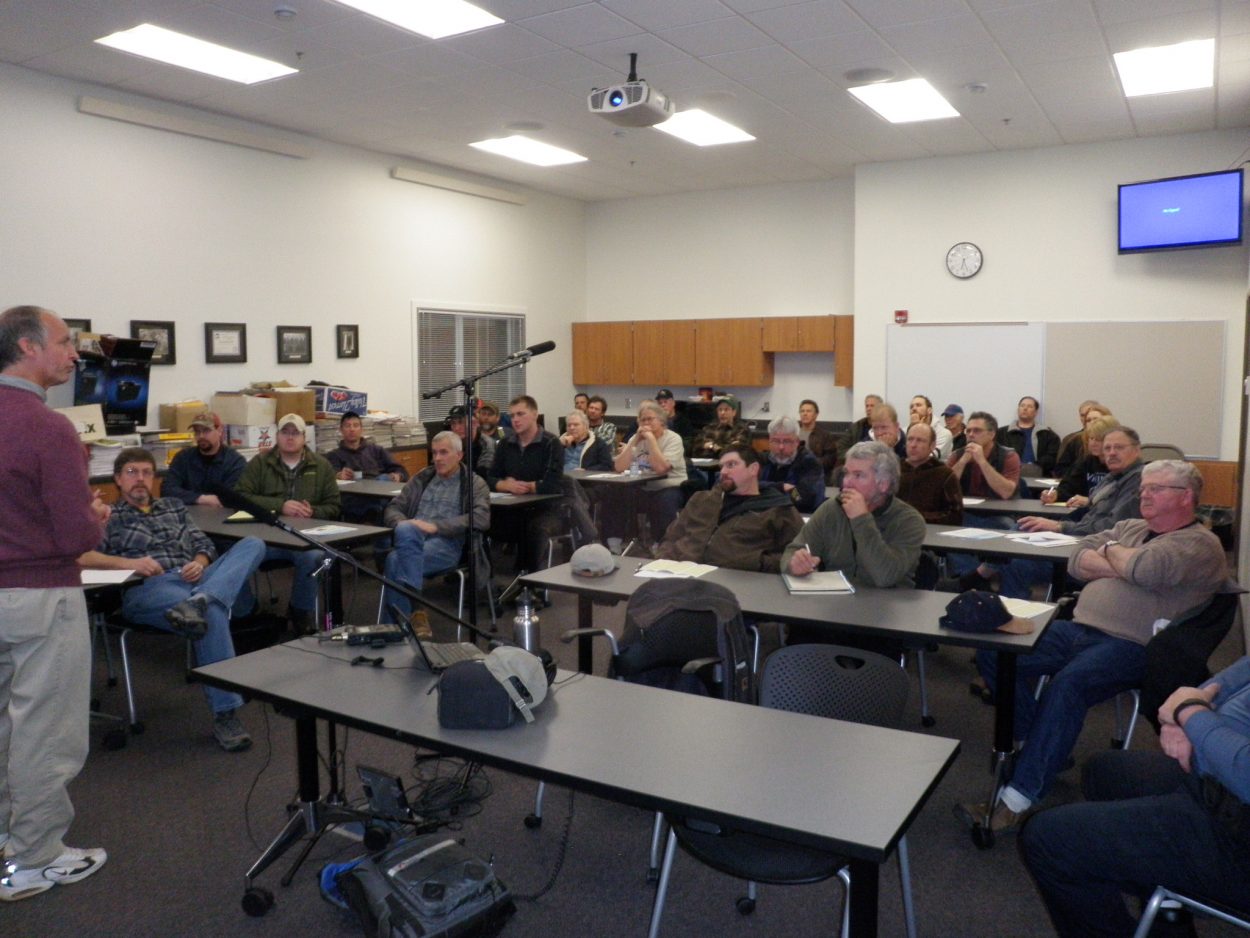 A meeting about the federal government’s fishery observer program drew a large crowd of vessel owners to the Petersburg firehall Wednesday night. Federal officials addressed dozens of questions and concerns from local fishermen, most of whom will be included in the program for the first time starting in January.

For iFriendly audio, click here:
The federal observer program in Alaska dates back to the late 1970’s according to the National Marine Fishery Service’s Martin Loefflad, who told the crowd this was the first big tune up in 23 years. Until now, it’s mainly affected boats over 60 feet long fishing groundfish like pollock and cod.

“And that program now is expanding to the halibut fleet and its going down to boats less than 60 feet, so we’re going down to 40 feet,” Loefflad explained. He said the observers job is to gather data for NMFS and the North Pacific Fishery Management Council as well for as the industry.

“We’re doing it partly for you, partly for us for our agency responsibilities and partly for the council. Because the council and all of us here are charged with managing these fisheries and we’re trying to get good estimates,” Loefflad said. “Catch, bycatch, discards, halibut mortality. How are people handling those fish.” 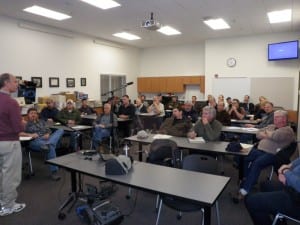 Much of the Petersburg fleet generally falls into a category called “partial coverage.” That’s for vessels 40 to 60 feet long fishing halibut or groundfish. Some of those boats will be randomly selected to carry an observer for one or more trips throughout the year or for every trip during a two month period. The specifics get complicated and vary depending on the size of the vessel and other factors. For instance, boats smaller than 40 feet are not included in the requirements for now, while boats 57 and a half to 60 feet have to give 72 hour notice of each fishing trip and may or may not be among the 15 percent selected to take an observer.

Some fishermen, Like Mickey Knight, didn’t like the fact that a specific boat might be chosen more than once. “I was thinking if you got picked, you were out of the box for a while. See that’s not random the way I talk. If I get picked and I did it you get it over with. I’d almost volunteer for that,” Knight said.

The vessel owners didn’t raise objections to being observed. Rather, many of their concerns and questions focused on the logistics of carrying an observer, an extra person, on a small boat with limited room and an often changing fishing plans. How will it affect or impede their operations? What are the skipper’s responsibilities under the program? For instance, what if a boat is selected, but the observer is delayed because of weather. Or maybe there are so many boats heading out at the same time that there are not enough observers.

Gary Slaven was one of several people who raised that issue with NMFS’s Glenn Campbell. Campbell repeatedly emphasized that once a skipper gave the proper notice, it was up to to NMFS and its contractor to provide the observer in time.

“Let’s say 70 trips from this port get logged and 35 of them get picked for observer coverage. That’s their responsibility to get observers there,” Campbell said.

“But my question is what happens if they don’t have an observer?,” Slaven asked.

“Again, it goes back to the same stuff. We are not going to keep you at the dock. If everybody followed the rules and they were unable to get you an observer, you are released from coverage and you can go fishing,” Campbell explained.

For three hours, fishermen in the audience raised scenario after scenario and issue after issue. Andy Kittams was among them. “Do we gotta go through safety drills, do they have free run of the boat, do we have to, food, meals, the whole gamut. You know, we’re kind of kings of our own little fiefdom and we have crew that have been on our boats for years. Everybody knows the program. We’ve got somebody, I don’t know if they’ve ever even been on a boat before,” Kittams wondered.

Observers carry their own safety gear including a survival suit and they learn how to use it in the water as part of their training. As far as meals and living accommodations, they will be following the boat’s routine according to Loefled and the other officials.

“They don’t get to present you with a menu of what they are expecting there. The observers are trained to adapt to the boat,” Loefflad explained.

The NMFS staffers tried to answer each question in turn.the meeting was pretty friendly overall and they were able to address a wide range of concerns. But the last issue of the evening proved to be thorny.

NMFS plans to collect one and a quarter percent of the value of each landing to pay for the program. The fee in itself wasn’t as much the problem but the staffers said the agency would use a standardized value based on the previous year’s prices.

And that was a serious concern for several in the audience who pointed out that the fleet would end up paying more than one-and-a-quarter percent if prices are down, as some expect, this coming year. Fisherman Ed Wood questioned why the agency couldn’t just use the record of landing, the fish tickets, which show the actual poundage and the actual price paid for the fish in real time.

“I mean if you can’t look at the fish ticket prices, you shouldn’t even be taking money from us,” Wood said.

NMFS staffers expressed a willingness to work with the fleet on this and other issues. The Alaska Region’s Sally Bibb emphasized that they wanted a system that was as fair as it could be. The new observer program goes into effect January 1st.