The U.S. Forest Service’s draft environmental study for a power line from Petersburg to Kake is supposed to be out for public review this spring. At the same time, the Federal Highway Administration is just getting started with a study for a controversial road and ferry connection that could accompany the transmission line. While the two projects are closely linked, planning for the intertie is well ahead and the two environmental impact statements remain separate. Matt Lichtenstein asked federal officials and project consultants for an update: There are a lot of agencies, organizations and consultants playing various roles in both projects. The Southeast Alaska Power Agency has taken over management of the electric intertie. The idea of that project is to provide the struggling, diesel-dependent town of Kake with cheaper hydro-electric power from Petersburg. SEAPA currently owns two hydro-electric plants and transmission lines serving Petersburg, Wrangell and Ketchikan and is run by a board of directors from those municipalities. This past summer, SEAPA agreed to construct, own, operate and maintain the proposed Kake connection as well. That’s provided it is paid for with grants and/or Kake power rates. SEAPA has since used state funds to hire an engineering firm, Commonwealth Associates, to manage the project.

Commonwealth’s Mark Schinman is in charge and says the fieldwork for the Environmental Impact Statement is complete, ““Some draft documents have been written and we’re starting to review those with the forest service. We’ve gotten comments from the forest service. We’re working through incorporating those comments and we plan to issue a draft eis in april or may of this coming year.”

After the draft EIS comes out this spring, Schinman says they’ll be holding meetings to gather more public input. He says the plan is to issue a final EIS in the fall of 2013. The Forest Service will ultimately decide whether to approve the final document and give the project the green light. Another consulting firm, called Tetra Tech, is researching and writing the EIS for the agency. According to Schinman, the environmental study is considering two primary routes for the intertie. Project proponents have discussed both options for years.

“The Northern Route is one and the northern route will generally follow what’s been identified as a possible road that would connect Kake and Petersburg. So that route is being analyzed in the EIS. And the other route that’s being analyzed is called the center-south route,” says Schinman.

However, State officials have long pushed for construction of a road connection on the North end of Kupreanof. So, Schinman says the Northern Route will be the preferred alternative in the intertie EIS, but he says they are giving equal consideration to the center-south route, “We need to understand the environmental impacts before any final decisions are made and the center-south route is certainly a definite possibility. As far as for construction purposes, the center-south route is a lower-cost route for us. And, so it definitely has advantages and so we’re going to be looking at it hard. But at the same time, if the state does build the road, over the long term, there’s some definite advantages to having the power line adjacent to the road for ongoing maintenance and operation of the line.”

There’s no guarantee a road will be approved for any particular route and that presents a problem of timing since the environmental studies for both projects are separate. So, how can the planners pick a preferred route for the power line when they don’t know whether or where there will be a road?

“That’s something that’s going to take some thought and research and we’re going to have to coordinate with the road people and develop a good solution and we don’t have that done yet,” says Schinman

And the Environmental Impact Statement for the proposed road is far-behind the intertie.

“The Kake Access project is only in its infancy. It’s just beginning,” according to Doug Hecox, spokesman for the Federal Highway Administration which is the lead agency responsible for the Kake to Petersburg Road EIS. He says the agency plans to announce the beginning of the road’s environmental review process in mid-January and hold the first round of public meetings to gather local input the following month.

The Alaska Department of Transportation has already proposed several potential alternatives for road and ferry crossings between the two towns. 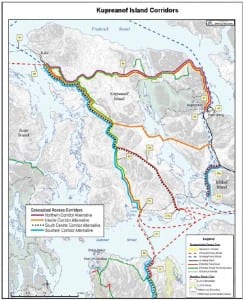 According to Hecox, those options could change, “The existing information that the state has put out is useful. But I wouldn’t want anybody to believe that those are the final choices because again the entire process we are about to begin on is to find the best way or the way that the public is most supportive of and it may require some modifications of the existing routes, or the recommended routes.”

The state’s preference for the Northern Route has generated controversy because it could end up putting a ferry terminal and road in the heart of the roadless city of Kupreanof, a small community of about 30 people just across the Wrangell Narrows from Petersburg.

Like the intertie, the road would run along Tongass National Forest land. So, Hecox says it will be the Forest Service, not Federal Highways, that will make the final decision on whether the project is approved:

“Our job is simply to make sure the environmental documentation and all the rules and requirements have been satisfied and that some recommended route appears to be the logical choice for a variety of reasons,” Hecox says.

Transportation, not power is the focus for Federal Highways and Hecox says the agency has been asked to evaluate how to improve access to the very rural community of Kake. But along with access, road supporters have promoted the project as a way of lowering the cost of constructing and maintaining a powerline. Hecox is not yet sure how that issue will factor into the road EIS.

“Again this all gets back to the public. If the public wants that and they want to insure that this route can accommodate underground power or whatever, we’ll definitely work that into the evaluation but the decision about whether to include electric powerlines with the road…I don’t know that would be our decision to make,” he says.

Last session, The State legislature appropriated 40 million dollars for construction of a basic, one-lane gravel road with turnouts on the North end of Kupreanof. That did not include money for the intertie, which has been estimated to cost around the same amount.

Click on the links throughout the above text to view related web sites as well as a sampling of our earlier stories on this topic. More stories on the projects can be found through a search of “Kake road” and/or “Kake intertie” on our site.