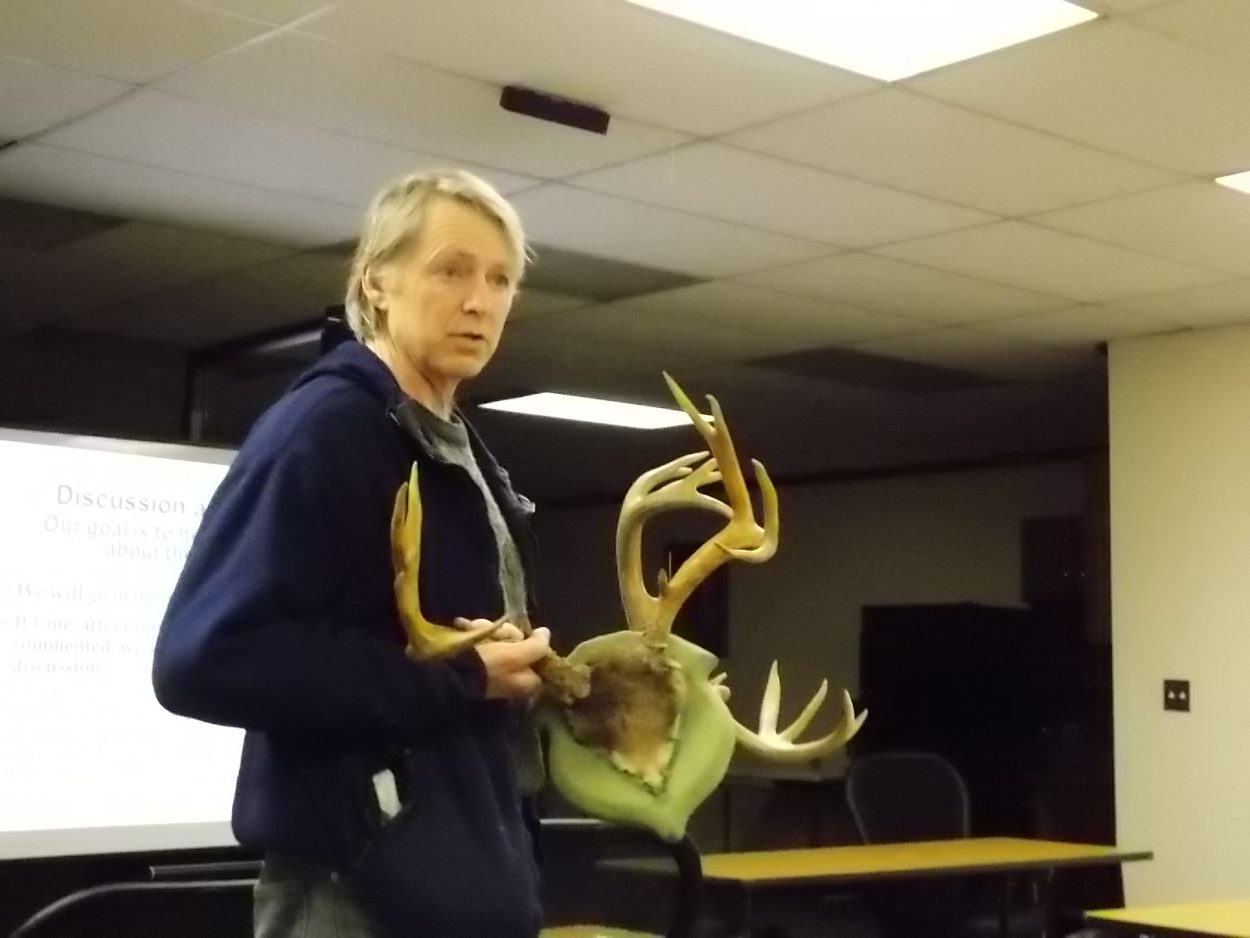 Sustaining deer and salmon habitat was the top priority for several Petersburg residents who turned out to a local meeting with the U-S Forest service this week. The agency is holding a series of such gatherings around Southeast to record public comments on its overall management plan for the Tongass forest. The plan is undergoing a five-year review. Matt Lichtenstein has more on the Petersburg meeting:
For mobile-friendly audio, click here. 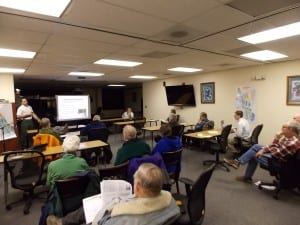 “It lays out designations across the ground on what types of activities can occur and where. So, we refer to them often as land use designations. That’s how the plan refers to them. There are 19 and each one of them allows varying degrees of activities, all of which are trying to get to desired conditions which is what the forest plan really establishes. This is the desired condition for the 17 million acres of the tongass. Not all acres are treated equally. Again, you have things like wilderness and on the other extreme you have timber development LUDs where you’re actively seeking to develop the timber resource and there’s a whole host of things in between.”

Eight members of the public turned out to the Petersburg meeting. Those who spoke focused on the impact of timber harvests, particularly clear-cut logging, on deer and salmon habitat. In particular, several raised concerns over the loss of low-elevation high-volume old growth forest that deer depend on to survive in winter. 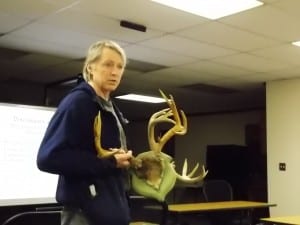 Petersburg’s Eric Lee displays the antlers of deer shot by his father and grandfather.

Lifelong Petersburg resident Eric Lee brought with him a couple large sets of antlers from deer shot by his father and grandfather on Petersburg’s home Island, Mitkof, around 1970. He said you don’t see horns like them anymore. Lee asserted that the Forest Service’s large timber sales have been contrary to the Tongass plan’s conservation strategy to maintain viable wildlife populations.

“You know we can look at our own island and see whats happened to the deer population since big time logging started. It has collapsed basically. There are no hunting opportunities that are meaningful on this island anymore. People go out but a lot of people don’t because the chances of getting a deer are so slim. Now the same thing is happening across the narrows on Lindenberg Peninsula. The deer population’s crashing yet there’s a huge sale going to go be started over there to cut the last of the winter range that’s left over there.”

Lee pointed out that Mitkof Island and nearby Kupreanoff Island’s Lindenberg peninsula had once been Petersburg’s breadbasket for deer. Because of low deer numbers, Mitkof Island has long been limited to a two week hunt with a one buck bag limit. This year, State Board of Game put the same restrictions in place for Lindenberg. The Department of Fish and Game’s Wildlife Division is worried about deer numbers there because of wolf predation, severe winters and the loss of habitat from logging.

The lack of nearby hunting opportunity has driven some locals to travel further to find deer in potentially dangerous fall and winter weather. Another longtime resident, Dave Beebe blamed the Forest Service for what he called “a failed management strategy in a biological sense and a failed subsistence responsibility to assure huntable populations of deer”

“And I cannot overemphasize the importance of Lindenberg Peninsula as it relates to Mitkof Island and as that whole scenario relates to the ability for hunters to access deer without taking their lives in their own hands. Winter mortality works not only on deer but on deer hunters,” Beebe said.

Petersburg’s Dave Randrup said he had seen the changes since his family bought their land on the Lindenberg peninsula in 1956. He emphasized that the old-growth deer habitat lost to logging over the years could not be replaced.

“There’s supposed to be a tradeoff between timber harvesting and deer habitat. I think we’ve tipped the scales already. I think we’re well past the balance point. It seems to me if your taking one resource and putting the other in the tank, like our deer habitat, I don’t know how you can justify that.”

The concerns were not limited to timber harvest, Petersburg’s Karen McCullough pointed out that there are currently two separate environmental studies underway for a road and electric intertie across Kupreanoff between Petersburg and Kake. McCullough suggested the Forest Service should be taking another look at its broader Tongass plan first.

“I’m very confused, as we go through all these public process which are disconnected yet connected and this seems to be the one that’s at the top which sets guidelines for the Tongass. So, I guess part of me would really like to see us take a really hard look at the Tongass and then come into these other areas which might mean slowing things down a little which doesn’t sound like what people want to do but in the long run, I think might get to what Dave’s talking about is how do we protect this area for the sustainability of fish and wildlife.”

The Forest Service’s Tongass webpage has a link to the five-year review. The public comment period is open through the end of March. U-S Senators Lisa Murkowski and Mark Begich have requested the agency extend the comment deadline.