A local doctor is bringing an ancient technique to Petersburg Medical Center. On June 6, Jennifer Hyer will start offering acupuncture at the center. The treatment dates back over 2000 years. 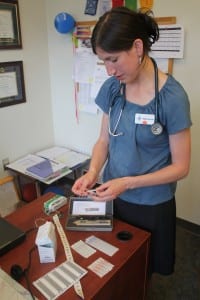 Hyer is always searching for new or different ways to solve problems. And as a doctor, she says she was never satisfied with just learning the basic methods she was taught in medical school. She wanted to expand and see what other approaches she could learn. That led to her to acupuncture. And Hyer says that as she started researching the procedure more and more, she started seeing real, scientific benefits.

“The modern explanation is that needling these acupuncture points stimulates the nervous system to release chemicals in the muscles, spinal cord and brain,” Hyer says. “And those chemicals change the experience of pain or illness or trigger the release of other chemicals or hormones that influence the body’s own internal regulating system. So the idea is that this improved energy and biochemical balance produced by acupuncture results in stimulating the body’s natural healing abilities in promoting overall physical and emotional well-being.”

Many question whether acupuncture is really effective, but Hyer has always believed in it. She heard patients talk about how acupuncture healed them. She read medical journals, where studies talked about the benefits. And she heard how acupuncture didn’t just affect humans, but dogs and cats, too. So when the chance came up for her to learn the practice, she took advantage. 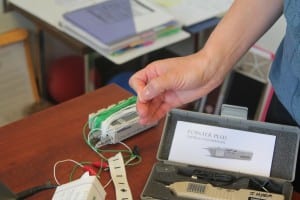 “So I had intended to do this as part of my 10-year plan. And the opportunity was given to me by Petersburg Medical Center, and I’m very thankful to them for that, about getting this training now and starting to offer it now,” Hyer says. “So I looked at different programs, and the number one program that trains physicians in acupuncture is the Helms Medical institute, so I would go down to Arizona, and in between going down to Arizona for my clinical practicums, I would be coming back here and studying, practicing on my husband and willing friends, and then going back down for further study.”

The process took six months, with 150 hours of study and another 150 spent caring for patients in Arizona. But Hyer says the experience taught her just how much acupuncture could offer. And when she started practicing and working on real, live patients, she was blown away.

“There are some amazing results,” Hyer says. “One example is that I didn’t know that acupuncture could be used for acute conditions. So someone came in with a sprained ankle, and it was very red and swollen. So we did a tendonomuscular meridian on this patient, and when we put in these points, you could actually watch the swelling and redness of the ankle decrease right before your eyes. And the person was able to stand up on walk on their ankle, when they weren’t when they came in.”

Hyer says acupuncture treatments vary based on what needs to be fixed. In almost all cases, doctors apply needles to precise pressure points on the body. But they vary it up, too, adding heat or sometimes even electricity to those points. The treatments can be simple, used to just promote general well-being. But they can also be used for all sorts of ailments, from migraines to bronchitis to chronic back pain. But Hyer says that she won’t just be using acupuncture by itself for those problems – she’ll be mixing it with modern medicine.

“The idea and the way that I intend to practice is that I’m a medical acupuncturist, which means that I’m going to practice integrative medicine, which is blending the best of Eastern and Western medicine traditions. So if you came to see me for sinusitis, if you need antibiotics, I could prescribe those antibiotics. But then we could also do acupuncture to help open up your sinuses, encourage that drainage, and prevent you from getting future episodes of sinusitis. So it’s blending the two.”

Hyer will start practicing acupuncture at Petersburg Medical Center on June 6, and a waitlist has already started for her services. As for paying for the treatments, Hyer says that workers comp. and some private insurers cover acupuncture, but Medicare and Medicaid don’t cover the procedures just yet.