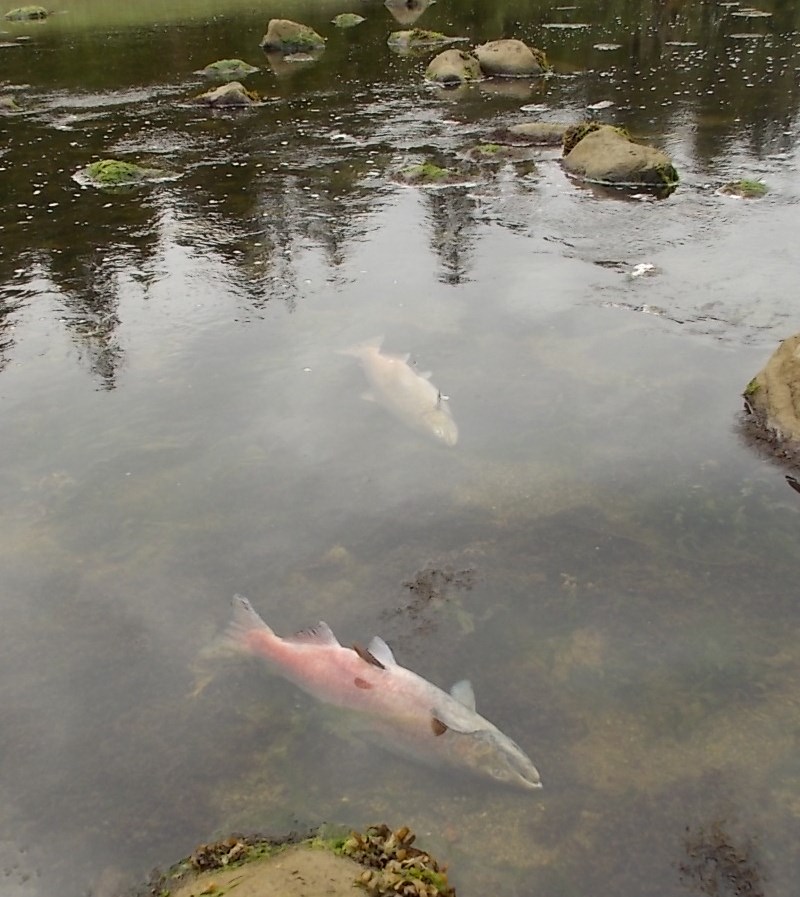 Over a thousand hatchery king salmon died at Blind River rapids sometime last week and are a total loss. The Chinook were returning to the Crystal Lake Hatchery on southern Mitkof Island, south of Petersburg.

For iFriendly audio, click here:
Alaska Department of Fish and Game sportfish biologist Doug Fleming estimates 1,100 kings died, most likely on Wednesday, July 17th. Fleming said he discovered the die-off after last week’s summertime sunshine. “So earlier in the week, started monitoring the water temperatures and seeing it was getting to the dangerous levels,” Fleming said. “And so, getting through til Wednesday which appeared to be the hottest day, then on Thursday I was conducting an aerial survey just to get a grip on how many fish may have been killed by the warm water, not expecting to see a large die off but some and I was shocked to see the numbers of fish that we lost at time. So that was on Thursday afternoon after the weather had broke.”

Fleming recorded water temperatures at Blind River rapids in the 80s that week. He suspects that some combination of hot water, low oxygen levels in the water and a large number of fish trapped in the fresh water of Blind Slough led to conditions that the kings could not survive. 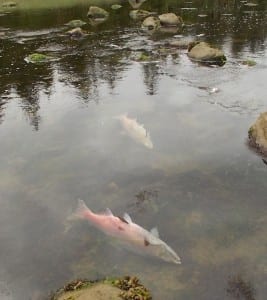 The tides may have also played a role. Fleming said the die-off happened during smaller tides, when the cooler ocean water may not reach far enough upstream. “The tides were building. We were just getting a small amount of tide exchange. It appears if, if the fish had made it through Wednesday night, they probably would have survived. We had a change in the weather, cooling off. And the tides are growing they’re very large now. I’ve heard reports that these carcasses are starting to wash out into the Wrangell Narrows. But yeah there’s a lot of tide now. So the remaining fish, our hopes are the remaining fish will use the tides to get up to the hatchery.”

Fish and Game was forecasting 1,800 adult kings would this year. That 1,100 dead includes adults as well as one- and two-year-old Chinook, however, Fleming says it’s a sizeable portion of the expected return that died. An unknown number of kings survived the hot water and can be seen still finning around the deeper pools at the rapids and the slough. Biologists won’t know until later this summer how many kings avoided the hot water and will still return to the hatchery. Those kings normally start showing up at the hatchery in early to mid-August.

Crystal Lake has not met its goals for broodstock, the fish needed to produce future generations, for the past four years. The hatchery has been forced to rely on brood stock eggs from other operations in Southeast and that could be the case again this year.

The eggs cannot be salvaged from the dead kings, while birds, bugs, and bears are making quick work of the carcasses. 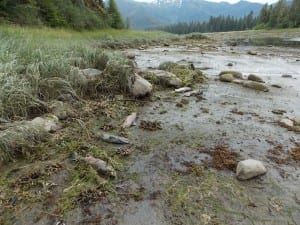 The Chinook die-off is not unheard of, and this year’s is not even the largest at Blind Slough. In 1989, about 1,400 fish were found dead in the slough. The past three and a half decades have seen six years, including 2013, with fish die-offs topping 500 king salmon.

Fleming said the poor conditions have also occurred in other salmon streams. “There’s other cases where its happened with other species, whether its pink salmon or others, in some of the large numbers of fish that pile into a creek and then water conditions change and then fish can basically suffocate and have large die offs but Blind Slough just does, the way it is, it’s shallow and wide in the middle portion of the slough there’s not a lot of shaded deep narrow channels to keep the water temperatures cool. Anyway it’s a difficult place to get fish through.”

Fleming and others from Fish and Game on Friday recovered some of the fish heads to have them checked for coded wire tags. Those tags will give biologists the age of fish that made it back to the slough and help with predicting future run strength.

A few chum salmon and hatchery cohos normally also start to show up to the rapids at this time of year. The slough was closed to sport fishing for June and July because of the weak king run and to allow enough kings to return for broodstock. Fishing will re-open there August 1st.