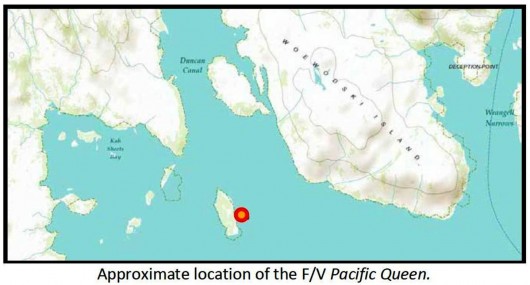 A 71-foot tender that sank southwest of Petersburg early Wednesday morning has leaked some fuel.

During a helicopter flyover later that day, the Coast Guard spotted an oily sheen near the mouth of Duncan Canal. That’s where the Pacific Queen sank.

State officials monitoring the situation say a small amount of diesel escaped from the vessel. But they say fuel vents were secured before it sank, limiting the potential for a larger spill.

The Coast Guard says the Pacific Queen had the capacity to carry 3,000 gallons of diesel. But the skipper told officials the tanks held only 1,000 gallons.

A Department of Environmental Conservation situation report says the tender hit a rock before sinking. The skipper and two crewmembers were picked up by another fishing boat and taken to Petersburg.

An oil spill response vessel from Juneau is on the scene. DEC says it’s carrying 2,500 feet of containment boom, plus oil-skimming equipment.

The Coast Guard said the tender sunk in 40 fathoms of water. But state officials say the depth is unknown.

The state lists Joseph Lykken of Wrangell as the Pacific Queen’s owner. It was tendering for SeaLevel Seafoods, based in Wrangell. The company won’t comment on the sinking.