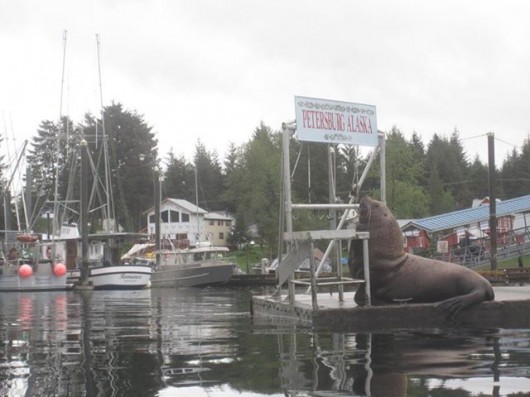 The National Marine Fisheries Service is still taking a wait-and-see approach to Petersburg’s sea lion problem in the harbors. A NMFS official from Juneau made a brief trip to the community last week to check out the docks and meet with locals about the issue. The borough, this summer, asked the agency to remove at least one large sea lion in the name of public safety. Despite the visit, NMFS is still not ready to take that step. So, Petersburg will continue pursuing non-lethal measures to deal with the situation. Matt Lichtenstein has an update:

“We don’t want anybody getting hurt and I understand that it can be a scary situation for folks and we want to try to work with the community to find a good solution,” says NMFS Assistant Regional Administrator for Protected Resources, John Kurland who helps protect and manage marine mammals for the agency. He recently spent a half-day in Petersburg, visiting harbor facilities and meeting with local officials and some harbor users concerned about one or more sea lions that have shown aggression towards people. 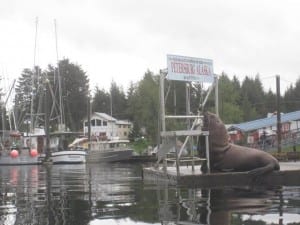 Petersburg resident Brad Hunter took this photo of a large sea lion on a Petersburg harbor float this summer. The borough wants federal officials to remove a problem sea lion from the area.

It’s been a little over a month since the borough assembly permanently prohibited the discard of fish waste in Petersburg’s inner harbors, though the harbor department posted signs banning the practice earlier….in the spring. The idea is to eliminate the attractant that draws the animals to the docks.

“I know it’s not a new issue. I know some of the signage has been up in the harbor for a very long time but people are being more vigilant about it now. You know really in the long run I think that’s what’s going to lead to solutions here. I think it’s going to be locally developed solutions, people figuring out what practices will work and just being safe, being smart and not creating these risky situations that might prompt an encounter with an animal,” says Kurland 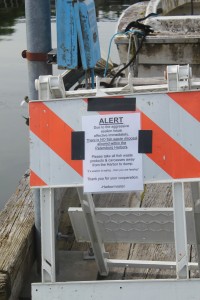 Petersburg borough posted notices like this in the spring after reports of aggressive sea lion encounters.

Around the time it finalized the fish-waste ban in August, the borough asked NMFS to remove an especially problematic sea lion. However, the agency is not willing to kill that animal or any others at this point.

Sea lions are a federally-protected species. The law does allow the government to kill one if it threatens human safety and NMFS has done that before in Petersburg. However, the agency has told local officials in this case it must first see that, “all reasonable efforts have been taken to eliminate food sources for a sustained period of time.”

And, according to Kurland, it hasn’t been long enough since the fish-waste ban was finalized.

“Part of my concern is if one sea lion were to be removed but the sources of food continue to be available, there are plenty of other sea lions out there and the situation could continue indefinitely and continuing to remove sea lions, I think, that’s not a good option in the long run. So, ideally, what would happen is enough of a change in practices that sea lions would stick to their natural sources of food and not associate humans with food and then you reach sort of an equilibrium; kind of a coexistence,” he says.

Many of the animals haul out on the sea plane float near the fish-cleaning station and boat-launch dock in South Harbor. As soon as a boat pulls up to the dock, the animals often show up looking for the fish scraps and carcasses that were once tossed into the water. The large pinnipeds also frequent other parts of the harbor when people clean fish or bait up gear aboard their vessels.

The towns ban on discarding fish scraps was prompted by an increasing number of complaints about sea lions acting aggressively. Complaints continued this summer about one or more sea lions getting up on the docks and grabbing a fish, going after a dog, or harassing kayakers.

Kurland encourages the public to contact NMFS or the borough harbormaster about any incidents.

“In particular if there is behavior that’s really different from normal, inquisitive sea lion behavior but something that people consider aggressive or out of the ordinary. It’s really important to know that, the date that it occurred, and again, if we continue to see a pattern of that sort of behavior following adoption of the ordinance and other measures taken in the community, that would be a signal that maybe further action is needed,” he says.

Along with the steps Petersburg has already taken, Kurland and other NMFS officials have suggested moving fish cleaning stations upland and preventing sea lions from hauling out on the nearby sea plane float.

In the meantime, the borough still wants NMFS to take action to remove one, possibly two sea lions that have been the focus of a lot of local concern.

Borough Manager Steve Giesbrecht was among the local officials and residents who met with Kurland.

“We continue to be really concerned that somebody’s going to get hurt. That was asked last night by some of these people. Is it going to take somebody getting hurt before NMFS takes action? You know his answer was ‘No. It doesn’t take that” but they need significantly more documentation before they’re willing to take a lethal approach. You know, that’s disappointing to a lot of folks,” Giesbrecht says.

Giesbrecht says his staff is considering non-lethal deterrents, like firing noisemaker shells at the animals.

“We’re going to potentially go down there and start trying to chase them off the seaplane float with some cracker rounds to scare them…..make it a little less friendly to be down there hoping that if they move off that float they won’t have such a line-of-site to the cleaning float and maybe it will create less opportunity for them to interact with people,” he says.

The floatplane dock is owned by the Alaska Department of Transportation. Spokesperson Jeremy Woodrow says his agency is willing to work with Petersburg and NMFS on the issue.