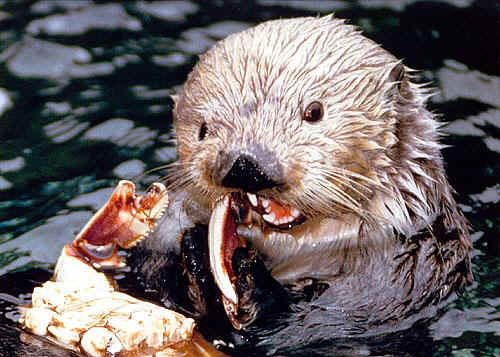 A multi-year field study of southern Southeast Alaska Sea Otters is wrapping up. The collaborative effort was prompted largely by fisherman’s concerns over the animal’s impact on commercially-harvested shellfish. The research yielded information on the rapidly growing population of otters, what they eat and how fast they are migrating through the inside waters. Matt Lichtenstein reports:

For mobile-friendly, downloadable audio, click here and you can download or listen to the full interview on which this story was based here.

PHD candidate Zack Hoyt has spent the past four years studying otters in southern southeast. That’s included capturing and tagging 30 of the animals, tracking their movements, and their foraging behavior using radio-telemetry. He’s been working with colleagues from the University of Alaska Fairbanks as well as the US Fish and Wildlife Service.

Overall, Hoyt says southern southeast is seeing an otter population that is growing exponentially but that growth isn’t the same in every area and neither is their diet

“A lot of areas, areas where otters have been for quite some time, we’re actually seeing a slowing in the population growth and those sort of sub populations have a much different diet than other sub populations within this larger southern southeast population that have larger growth rates and have higher densities,” says Hoyt.

The fur trade wiped out Southeast Otters by the early 20th century but the state re-introduced the animals to the outer coast in the 1960’s and they’ve thrived.

The animals have been re-colonizing southeast inside waters for the last 10 to 15 years, according to Hoyt, who says they’ve been expanding their range by 1.5 to 1.7 square kilometers a year.

The U-S Fish and Wildlife’s estimates the region’s otter population at nearly 26 thousand based on aerial surveys in 2010 and 2011.

University of Alaska Marine Advisory Program Agent Sunny Rice interviewed Southeast residents about their observations of otters moving into new areas. She thinks those individual reports could help paint a broader picture of the otter’s expansion:

“It paralleled fairly closely what the surveys had shown. There were some observations that I got from local people that were outside of the range of those surveys but those surveys are specific points in time and they also only look for aggregations of otters whereas people would be reporting individual sightings to me and so it may be that those out of range sightings which happened earlier on predict where that range might go,” she says.

“We definitely have seen a very clear correlation between sea otters colonizing an area and a decrease in those commercial shellfish species. Those shellfish species that we also think of as commercial. Usually, those are sort of energy-rich and easy to obtain for a sea otter. So, those of course, are the species that an otter is going to select first,” says Hoyt.

He says otters typically forage 30 to 60 feet deep though they saw some young males going as deep as 150 feet.

Hoyt expects the region will continue to see a decline in the amount of commercially-available shellfish but he says it’s premature to blame it entirely on the otters.

“We do know it is probably a major cause of the decline in a lot of these fisheries but we have also got a lot of other things that we kind of have got to tease out of this. There’s economics involved, regulations involved that allow certain areas to get depleted even faster than they would because of compression of fleets and sort of other management scenarios,” says Hoyt.

Otters are not preyed upon by orcas or sharks in Southeast and they are protected under federal law. But Coastal Alaska Natives may hunt them and Hoyt says a big upswing in hunting has had an impact on the growth of the otter population in the Kake area.

In fact, according to the US Fish and Wildlife Service, hunting is at an all-time high.

This coming year, Hoyt will be writing up his field-data for a peer-reviewed publication and his doctoral thesis. Meanwhile, the US Fish and Wildlife service expects to do more aerial surveys and other collaborative research with the university in the future.