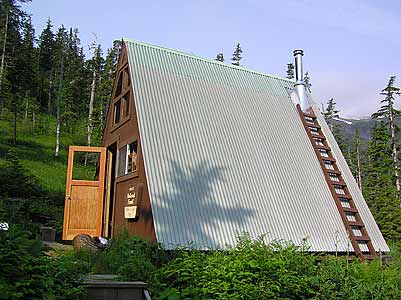 The U.S. Forest Service this month is taking more public comments on a plan to close nine recreational cabins on the Tongass National Forest in Southeast Alaska. The agency is also proposing to convert three other cabins to three-sided shelters. Officials say the structures are not maintained and hardly used. In addition, other recreation sites on the Tongass could be considered for closure in the future.

For mobile-friendly audio, click here:
The Forest Service says it’s not able to cover the costs of operation and maintenance for the 152 recreational cabins on the Tongass and is proposing to close nine of them. An environmental assessment document published in November outlines the agency’s plans.

“These particular cabins that are being looked at in this document are ones that may not have been used for the last 10 years,” said Victoria Houser, recreation planner on Prince of Wales Island. “They haven’t even been on the reservation system some of them. Like a tree hit one of them and is completely knocked down. These ones are kind of the obvious ones that if we get rid of them hopefully it’s not going to be a huge change to the cabin system in general.”

The nine are proposed for removal are the Beaver Camp, Checats Lake and Red Alders cabin near Ketchikan, Binkley Slough at the mouth of the Stikine River near Wrangell and DeBoer Lake near Thomas Bay on the mainland north of Petersburg. Also on the list are Maksoutof Lake and Rezanof Lake cabins on southern Baranof Island south of Sitka, Square Lake near Yakutat and McGilvery cabin in the Karta Wilderness Area on Prince of Wales Island. Houser said that McGilvery cabin is an example of one cabin that’s no longer safe. “It’s terribly full of black mold because the skylight in the top is broken out. It just gets wet and disgusting in there and it’s not healthy to stay there. And it would cost a lot of money to replace it.” 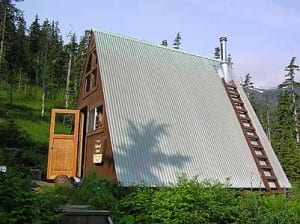 The agency estimates it would cost $1.8 million to replace those cabins as well as others proposed for conversion to shelters. Rental fees from the cabin program forest-wide each year total just over 300-thousand dollars. Meanwhile, the agency has a backlog of maintenance work, from stocking wood sheds to cleaning out pit toilets in all the forest’s remote cabin locations. The budget for the Tongass cabin program this past year was $1.3 million; that’s been dropping and is expected to continue shrinking.

Houser said the agency’s budget and location of the remote structures also enter into the decision. “A lot of the ones that are in this document aren’t being used at all so they aren’t bringing in any fees and also they’re hard for us to get to. They’re really remote and really expensive to fly to so those things all compound and make these ones difficult to keep up and with our declining budget hard for us to maintain them.”

The nine cabins would have metal and glass removed and then either be burned, or left to rot into the forest floor.
The forest service says it has received comments from the public seeking to keep the Checats Lake Cabin near Ketchikan. Other comments supported keeping cabins in wilderness areas to provide for health and safety, according the environmental document.

Beside those changes, Houser said other cabin closures or conversions could be coming. “We are going to have to look at removing other cabins it’s likely in the future based on the fact that our budgets continue to decline. So we wanna make sure people are thinking about, although we looking specifically in this document at these 11, these 12 cabin locations and these nine removals, we are thinking in a more broad sense into the future of what’s gonna come next.”

The decision on these 12 sites could be out sometime in 2014 from the Forest Supervisor. The agency already had one public comment period on plans to close the cabins in 2012.
This second comment period ends January 2, 2014.

For more information on the proposed cabin removals, click this link:

The email address to submit comments is comments-alaska-tongass@fs.fed.us

(Editor’s note: this story has been corrected with an ending date for the comment period of January 2, not December 20 as first reported)