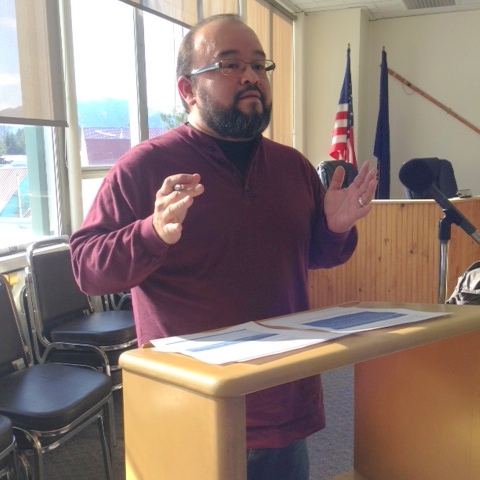 The committee that’s been looking at modifying the sales tax in Petersburg decided not to recommend any changes to the seniors’ exemption. They did go ahead and support possible changes to the tax cap and looking into taxing tobacco products.


The committee has spent the last several months reviewing current sales tax exemptions as a way to increase revenue. They’ve discussed a variety of options and looked at some taxes that other Southeast communities impose.

Chair Sue Flint started off the meeting Tuesday saying that they have come a long way.

“Well, we’re finally getting down to brass tacks here,” she said.

Committee member, Fran Jones, agreed with Flint saying they’ve considered a lot of ideas and needed to make a recommendation to the assembly.

“I feel like let’s give them something,” Flint said. “Let’s tax rent.”

The idea didn’t get very far and the motion fell with a 3 to 1 vote.

Committee member Hillary Whitethorn said they should consider minor changes that might have a better chance of gaining public support.

“We have to be careful what we propose to the community because we’re at risk for them not accepting anything and so I don’t think our changes should be major because I think it’s less likely that they’ll accept those changes if they’re huge changes,” Whitethorn said.

Borough finances are okay right now but that could change in the next ten years when the population of seniors is expected to grow. Committee Chair Flint said that would mean less people paying sales tax, and in turn, less revenue to the Borough.

“We do know the baby boomers are the biggest group coming through our population,” Flint said. “We’re only in the third year of baby boomers turning 65 and we’ve seen a good increase in our tax exempt population here with the tax cards,”

A motion to limit the senior’s exemption to just heating fuel and food sales failed with a 1 to 4 vote, Flint being the sole supporter.

Committee member Whitethorn suggested expanding the idea to include not just heating fuel but all fuels.

“If we’re including their vehicle fuel, their boat fuel for their subsistence fishing, heating fuel and food,” Whitethorn said.

She said that would likely cover most expenses.

But Committee member John Murgas disagreed saying a tax break like that wouldn’t help the seniors with their highest cost, which he said was maintaining their homes. He was opposed to what he called, “any major changes” to the exemption.

“Limiting the tax exemption only to food and fuel and so forth really wouldn’t help the typical senior out that much and I think you’re going to see more of an exodus of seniors that will have to be somewhere else,” Murgas said.

The committee moved on from seniors and looked into raising the tax cap, which is a limit on the amount of a sale that can be taxed. Raising the amount is something that the public voted down in 2012 by only two votes and the committee believes it could do better with more marketing. The previous vote would have raised the cap from $1,200 to $1,700. This time, the committee considered a $1,500 cap.

Finance Director, Jody Tow, informed the committee that after looking into the possibility of taxing alcohol they found out that the Borough cannot because of state laws. While alcohol is off limits, tobacco is not. The committee heard from Mark Banda with Petersburg Indian Association who spoke in favor of such a tax, saying other communities in the state have had success with it. He said it could not only bring in revenue but curb the habit among residents as well.

“What I’m saying is that by raising these taxes or by supporting this we would actually be saving lives and youth initiation with tobacco use,” Banda said.

The committee agreed that it was worth looking into and made plans to bring the idea to the assembly. They said some of the revenue could be used for the hospital and tobacco cessation programs. They said there’s the possibility of creating a committee specifically for pursuing the tax.

A tax on tobacco products would have a long road ahead of it like any change to the sales tax ordinance would. It would first need to be approved by the full assembly and then go out for a public vote.

The committee’s recommendations will be presented to the assembly at their regular meeting March 17.