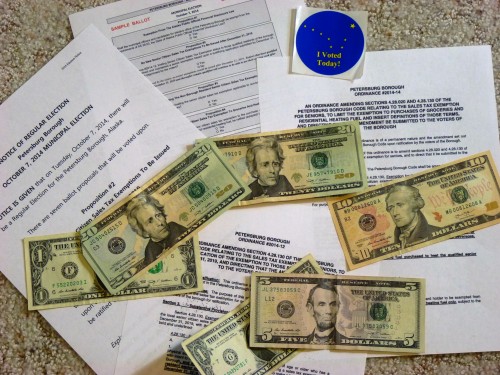 If you’re 65 or older, you don’t have to pay Petersburg’s 6 percent sales tax.

Municipal Finance Director Jody Tow says that means local government is losing out on a lot of money.

The borough’s annual sales-tax take is about $3 million. So eliminating the exemption would boost revenues by about 10 percent.

Borough figures show seniors make up a little more than 15 percent of the population. Sue Flint, who chaired the committee examining the exemptions, says it could almost double by 2020.

“And that just leaves young families to bear the burden of running the fire department, the snowplows, the roads [and] the police. So mostly, we just wanted to see if there was a more fair way to do this,” she says.

Not everyone believes the senior population boom will come. Lee Corrao, who also served on sales tax committee, questions the prediction.

And even if it’s right, he says it’s way too early to make such changes.

“So the justification for doing this at this time seems at best premature and possibly ill-advised all together,” he says.

Four ballot measures before Petersburg voters in the Oct. 7 municipal election detail different ways to cut back on the exemption.

The one with the most impact calls for sunsetting, or phasing out, the tax break, starting in about five years. Those eligible would have to apply for and get an exemption card by the end of 2019. After that, no one could apply.

Borough Clerk Kathy O’Rear wants to make sure seniors know if they already have the exemption, they won’t lose it.

“This five-year period would give people time to adjust to it. And ones who are getting close to that age of 65, to still have opportunity to obtain that exemption,” she says.

Two other ballot measures would tighten the rules.

One would make seniors just passing through Petersburg ineligible. Another measure requires seniors to be in town at least 185 days a year.

“We really want it for our year-round residents, who support the community in many other ways,” she says.

Yet another ballot measure would continue the tax exemption, but limit how it could be used.

“We have estimated that senior citizen exemptions are 50 percent comprised of all fuel and groceries,” she says.

“Not all needs are groceries and oil,” says tax committee member Corrao.

“I believe the end result would be to drive people more to the internet, where the city can’t tax them. … Six percent is a big deal right now,” he says.

Petersburg is not alone in its search for new revenues.

“Residents, as they should, want services for the taxes that they do pay. So, with payroll going up and fuel going up, many municipalities feel they don’t have many options,” she says.

Wasserman says senior sales tax exemptions are not getting much scrutiny elsewhere, though Juneau is considering that option.