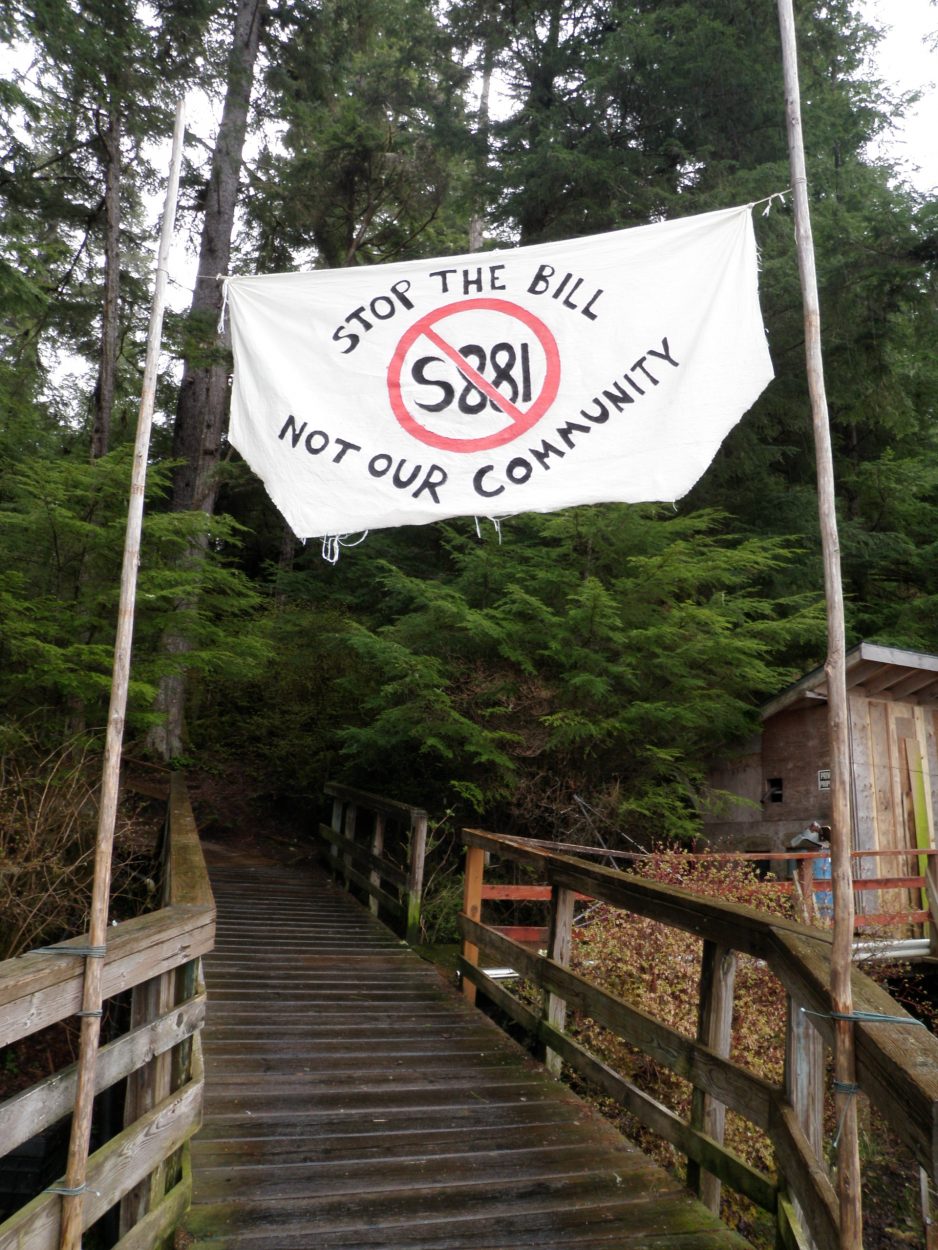 Legislation transferring tens of thousands of acres of the Tongass National Forest to the regional Native corporation Sealaska will supply timber and other economic development opportunities for the corporation. The bill also will set up new conservation areas in Southeast and transfer traditional historic sites and migration routes. The version of the legislation that’s been attached to a defense bill has undergone revisions during a multi-year process.

Sealaska Corporation has been trying for years to finalize its land selection under the Alaska Native Claims Settlement Act. The regional native corporation has sought to select its remaining land entitlement from acreage outside of the withdrawal areas specified in the 1971 law. It’s Senator Lisa Murkowski’s version of the bill to do that that’s moving in Congress. Murkowski held listening sessions in many communities in Southeast during the past few years.

A Senate staffer listens to testimony from Petersburg residents in 2010. (KFSK file photo)

Revisions included removal of some of the proposed logging parcels and economic development or “futures” sites. The remaining futures sites that could be used for energy sources or eco-tourism are near Yakutat, Kake and Hydaburg. There are also logging lands included on Kuiu, Prince of Wales, Tuxekan and Kosciusko islands along with the Cleveland Penninsula north of Ketchikan.

The corporation says it needs the transfer to maintain its logging operations and says the bill moves timber selections away from community watersheds and fish habitat to forestland that is predominately on the road system.

The bill also includes language addressing the Tongass National Forest’s transition to logging second growth trees. At a press conference in Juneau last month, U.S. Agriculture Department’s undersecretary for natural resources and the environment Robert Bonnie thought the forest could move forward with the transition even with the passage of the bill. “One of the things in there would relax, provide more flexibility around CMAI, this issue that I raised earlier, that would allow the forest service to get into young growth stands earlier,” Bonnie said. “Rather than having to wait until they’re 90 years old, it could potentially get in substantially earlier than that and that could help speed up the transition.” CMAI or culmination of mean annual increment is a forest term dealing with the peak rate of growth for a tree or stand of trees.

The bill also puts more than 150,000 acres of Tongass land into a non-development category, one step below a wilderness designation. Those new conservation areas would be on southwest Kupreanof Island, northern and central Prince of Wales, on central Kuiu Island, two areas of Kosciusko Island and on Sukkwan Island near Prince of Wales.

It also would transfer up to 490 acres of land the corporation would identify as historical sites or traditional cemetery lands around the region. And it transfers three traditional migration routes to the corporation. One is near Yakutat and Dry Bay. Another cuts across Kuiu Island at the Bay of Pillars, and a third runs across Kupreanof Island in between Duncan Canal and Portage Bay not far from Kake. Access to those routes would remain open to the public and the corporation.

Jaeleen Araujo, VP general counsel and corporate secretary for the Native corporation, said Sealaska is pleased the lands legislation is moving in Congress. “We’re just pretty hopeful that maybe this long journey that we’ve been on can finally come to an end and that we can move onto other priorities here at Sealaska,” Araujo said. “But this has been a long effort and we’re excited to just see some additional action on this important piece of legislation to Sealaska.”

Even with the changes to the bill, it’s been controversial in Southeast. A number of small communities asked Murkowski to pull it. Don Hernandez of Point Baker on northern Prince of Wales Island was disappointed to hear the bill could be passing. “This is not how that bill should be heard in Congress. We were led to believe through this process that if lands bills were packaged in some kind of an omnibus lands package that non-controversial bills would not be included in such a package and the Sealaska bill remains very controversial to a good number of interest groups in Southeast Alaska and I think this is a broken promise from our Congressional delegation.” 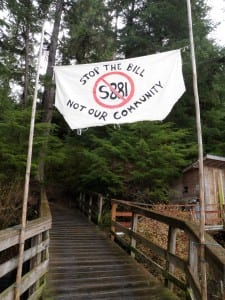 Residents of Port Protection and Point Baker on Northern Prince of Wales posted their opposition to the land transfer bill on the boardwalk into Port Protection in 2010. (KFSK file photo)

Some conservation groups have opposed the bill because it would mean logging old growth trees. Bruce Baker is a board member of the Greater Southeast Alaska Conservation Community and says the corporation has already clearcut scores of thousands of acres of centuries-old trees on what was formerly national forest land. “We don’t think it’s a very good deal for fellow Americans because the entitlement acres that Sealaska is willing to forego are worth less than what they would gain from this legislation,” Baker said. “And that’s true both from a timber value standpoint as well as a wildlife habitat value.”

Sealaska is entitled to 85,000 acres under ANSCA but is accepting about 15,000 acres less in the exchange.

The bill preserves public access on the transferred lands for subsistence hunting and fishing and non-commercial recreation use. Guiding and outfitting operations that have permits to use the forest service land would eventually lose those permits but could come up with a new use agreement with the corporation.