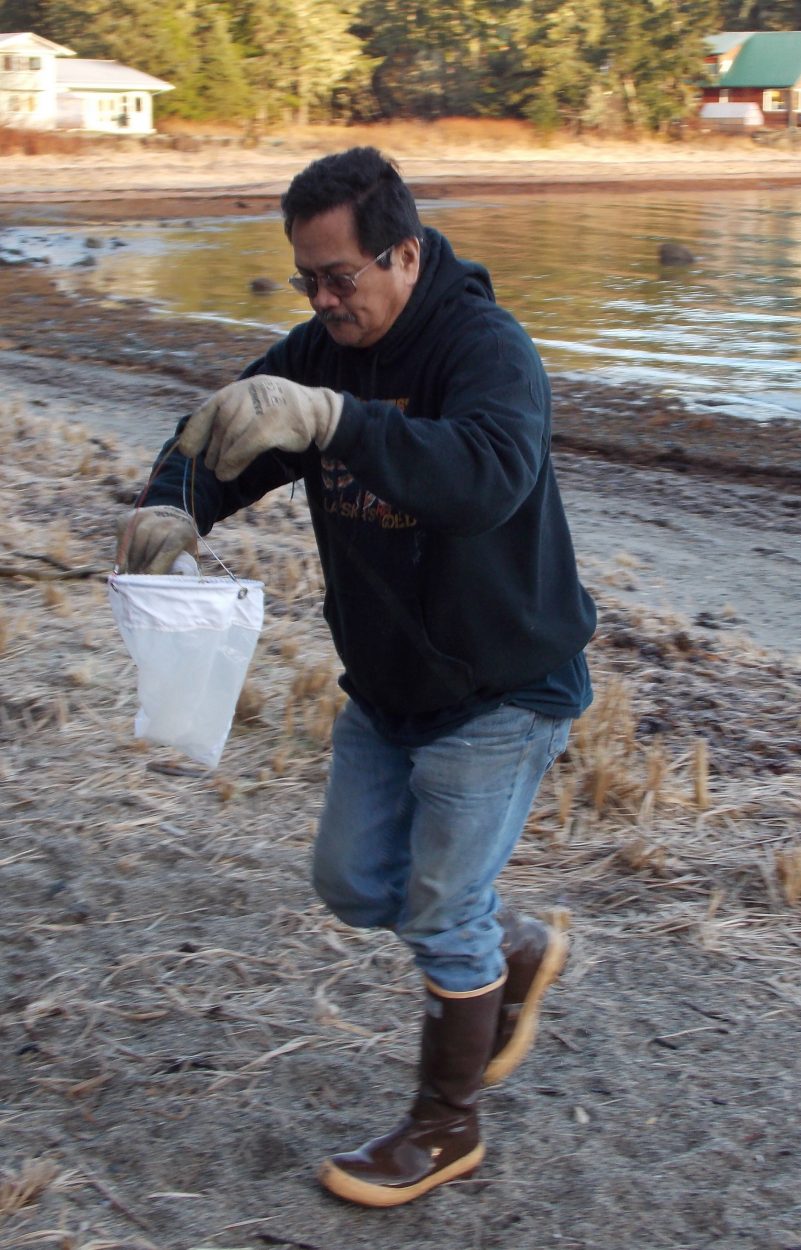 The Petersburg Indian Association has started monitoring water conditions at popular shellfish harvesting spots around town. They’re watching for a potentially dangerous algae bloom that could make clams unsafe to eat. The new program has also started up elsewhere in Southeast.

The sun is low in the sky on a clear and cool December morning as the Petersburg Indian Association’s tribal resource director Mark Banda and environmental technicians Natocha Lyons and Jeff Simbahon prepare to take readings and samples from the water at Sandy Beach. Lyons and Simbahon wade into the water as Banda shouts out instructions. “What we’re doing right now is I’ve got two assistants in the water,” Banda said. “I’ve got Natocha with a thermometer and she’s taking the temperature of the water right now. And I’ve got Jeff out there and what he’s doing is he’s got a long net and to the end of that net is a retaining tube. And it’s basically your basic squeeze tube and it’s tied to the end of that net there and that net is specifically made to harvest phytoplankton.” 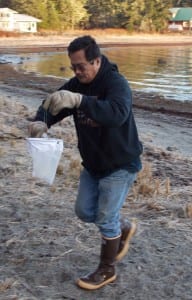 Jeff Simbahon brings in a water sample from Sandy Beach this month.

That phytoplankton could signal a dangerous bloom that could accumulate Paralytic Shellfish Poisoning toxins in the clams out on the tide flats. The PIA is using grant money from the Environmental Protection Agency to do the weekly sampling at Sandy Beach and other sites in the area. Banda said the PIA is working in conjunction with the Sitka Tribe of Alaska and other testing programs in Craig, Klawock, Yakutat and Juneau. The workers record air and water temperature, tide and weather observation, water salinity. They also bring those water samples back to the Banda’s office.

“And then when we get back to the office is when I will put some droplets of that sample we got, slap a slide over it and then put it under the microscope and actually see what we got,” said Banda. “And there we’re looking for phyto-plankton, is what we’re looking for, specific types of phyto-plankton. Lot of different critters in the water. It’s a whole new world when you look under there. It’s just a different world. It still freaks me out sometimes.”

The progam started up in December and Banda said the plan is to continue into the warmer months when algae blooms could be more likely. “What we’re seeing in the water is pretty minimal. There are a few, what we call diatoms which are the types of phytoplankton we’re looking for. Nothing that signifies a bloom. But this type of phytoplankton does go into a dormant stage during the colder months so we expect to see a lot more in the spring time.”

Cases of PSP poisoning are reported around Alaska every year. Commercially sold shellfish are tested regularly but there has not been any testing for people gathering clams, oysters, scallops or mussels on their own. In fact the state recommends against it.

However Banda said the new sampling will help with learn if there’s an algae bloom and in relatively quick fashion. “All of our samples that we get here if we see a bloom, we send them to a lab in Sitka that’s being funded right now. And in turn they will take it out and they’ll have the authority to say this area of your harvesting area is now closed. Before we would have to send it off to a federal organization in which they took about week and a half, two weeks to get the information back and by that time. You’ve got people harvesting in full bloom and that can be very dangerous.” 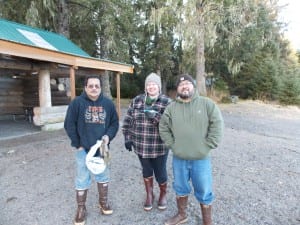 Banda and Lyons noted that people can suggest other sites. “I’m always open to suggestions as to where to go and test. Lot of people have their secret harvesting spots,” he said.

“I already gave him a few but we haven’t gone there yet,” Lyons said.

“I won’t tell I promise. Just let me know what they are I can check ‘em keep ‘em safe for you,” Banda said.

The monitoring already has one of the samplers Jeff Simbahon thinking differently about a favorite shellfish site. “There’s one spot that I used to go to. But ever since we did this, it’s cold enough (for a PSP reading) but no, I’m not going out there. More awareness you know…”

In three years the PIA wants to start testing the shellfish meat, not just the water, for toxins.