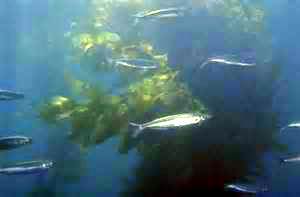 One of the Southeast’s first herring fishery of the year gets started later this month. The herring fishery for spawn-on-kelp opens March 17 in the Craig-Klawock pound fishery. As Angela Denning reports, other areas will be closed.


There are a few different herring fisheries in Southeast. Some focus on the fish but for the most part, it’s all about harvesting the eggs. That’s the case for the upcoming spawn-on-kelp pound fishery. It’s where fishermen use kelp to create a spawning environment and then salvage their eggs.

Usually there are several areas open for the spawn-on-kelp fishery but Craig-Klawock is the only area open this year. Ernest Sound, Tenakee Inlet, and Hoonah Sound are all closed because managers don’t believe there will be enough herring for a commercial harvest.

The Alaska Department of Fish and Game manages the commercial fisheries.

“It is based on sampling from the previous year as well as some on the grounds assessment surveys and then we basically collate all that information and come up with a forecast,” Gray says.

The spawn-on-kelp pound season will open Tuesday, March 17 and close at noon on May 10. It’s a lengthy season but Gray says they never know exactly when the herring will spawn.

“We kind of pick something on the early side and say, ‘we’ll start there and you know the guys want to be there for and they want to get herring in their ponds for that spawning event so they have to kind of bracket that whole period of time when herring might be available,” Gray says.

In the spawn-on-kelp fishery, there are two types of permits: for open pounds or closed pounds. Closed pounds are by far more popular among fishermen and involve them hanging kelp from a floating net structure and then releasing mature herring into the structure where the fish stay until they spawn. The kelp is the harvested and sold with the eggs on it and the fish are released.

Open pounds are open structures where kelp is placed and the structures are put in an area where herring are spawning. The fish can come and go at will.

State researcher biologist, Kyle Hebert, isn’t that concerned with the three areas that have closures in the spawn-on-kelp. He says the herring population fluctuates.

“From the department’s view, it’s not a cause for alarm,” Hebert says. “It’s certainly something that we’re looking at and watching and just keeping our eye so we’ll see how this year pans out. But it’s pretty normal for herring populations to go through big fluctuations. It’s true of Southeast Alaska or other places along the West Coast or in the World really so it’s not terribly unusual.”

Hebert says the stocks have been building up for the past ten or fifteen years and now we’re starting to see the decline.

“There seems to be a cycle going on region wide that we’ve observed for herring,” Hebert says. “We’ve seen kind of a downturn in the past three or four years among many of the stocks in Southeast including Craig Klawock area. I think in the Craig Klawock area, the decline that we’ve been seeing in the past few years is a little more tempered than some of the other areas.”

Herring are managed by spawning area stocks. Managers keep track of where they spawn and in what quantities. The fish start spawning at age 3. They can live up to about 12 to 13 years old but most don’t live that long.

Herring groups in Southeast move around from place to place within the region throughout the year but for spawning they like to stick to the same general areas, which commercial fishermen attempt to target.

Managers are assuming that there will be more fishermen focusing on Craig because of the other closures. In a written statement, they advise fishermen that the department may close fishing at night to ensure an orderly fishery.

The total guideline harvest level or GHL is down for the fishery. The GHL is combined between the spawn-on-kelp and a winter bait fishery and this year it’s about a third less than last year’s.

The spawn-on-kelp fishery for Craig has been allocated 904 tons this year. In addition, the fishery gets the left over quota from the herring bait fishery, bringing the total to 1,298 tons.