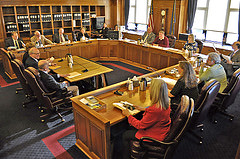 The House finance committee is finishing up work on the state’s operating budget this week (3/9) and considering hundreds of millions of dollars of cuts to state agencies, grants and services. The committee has listened to hundreds of Alaskans seeking to restore those funding cuts. Residents from the Petersburg area last week argued against proposed reductions to education spending, public broadcasting and the marine highway system.

House majority representatives spoke about the statewide testimony during a press conference Thursday morning. Finance co-chair Mark Neuman, a Republican from Big Lake, outlined the size of the budget cuts made by the house finance committee. “Total reductions that we did were almost 400 million dollars, 387.4 million,” he said. “That’s about an 8.6 percent reduction below FY’15 on that. Those are some pretty big reductions. You know we’re looking at some unprecedented challenges this year. Nobody realized that we were gonna lose 60 percent of our revenue in the last six months but it happened and I think we’re reacting to that and we’re dealing with it.”

By Thursday, the committee received more than 580 emails in written testimony and have heard from over 250 Alaskans during the budget process. Neuman and other committee members said they’d heard support to restoring ferry funding, public broadcasting money and funding for Department of Natural Resources forestry staff.

The other co-chair, Fairbanks Republican Steve Thompson said the committee was trying to get balance in the budget cuts. “If we’re going to increase the budget in one area, where are we going to reduce it in another?” he wondered. “Increase education funding, do we reduce senior services? Or senior services wants to be increased, do we decrease in another area? We’re trying to balance this out and it’s a difficult thing to do but we’re trying to get through this that we don’t completely kill a program, or something that means a lot.” Thompson thought budget cuts next year would be more difficult that this year. The state is facing a budget deficit of over three billion dollars.

Like the testimony from elsewhere in the state, residents in Petersburg wanted smaller cuts or no cuts to state funding. School board member and parent Megan Litster urged the committee not to cut one-time school money approved under last year’s education funding bill, House bill 278, along with obesity prevention grants for school districts. “These two programs together if cut as proposed this year would equal about 300,000 in funds next year from our district alone,” Litster said. “In realized numbers that could mean four teaching positions and multiple programs in our district.”

Acting school superintendent Erica Kludt-Painter said the Petersburg school district planned on that one-time funding to districts approved last year as well as what was expected to be a four-year obesity prevention grant. “This money needs to be reinstated,” Kludt-Painter said. “Our budget was responsibly prepared based on this forward funding. We would like you to keep the promise. These actions will result in lost reduced staffing, additional program cuts in our district and cuts to activities and travel, in the very near future.”

Other testimony sought a smaller reduction for public broadcasting, TV stations and radio stations like KFSK. Charles “Ed” Wood spoke about the importance of local radio. “There’s no doubt that in times of sever fiscal deficits government expenditures need to be reduced,” Wood tesified. “However in my view the proposed 59 percent cut to public broadcasting is excessive. The impact of public broadcasting shouldn’t be taken lightly in the context of an informed public.”

Bob Martin also asked the committee to reconsider the cut to public radio. “I know you have a tough job with these budget cuts but 59 percent is an extreme cut to one agency. I think it would lead to huge cuts to local programming and without that I think the whole statewide public radio network becomes less relevant to everybody.”

Others testifying focused on ferry system cuts that could mean a 20 percent reduction in service on the Alaska Marine Highway. Dave Kensigner uses the ferries to import and sell fruits and vegetables in Southeast communities. “My business will affected by cancelation of my ferry service this summer,” Kensigner said. “Direct cost to my business, to myself is 20,000 dollars and I’ve also informed one employee they will not be working this summer. So your cuts are going to have consequences, they’re gonna have real consequences to the economy.”

Another local business owner, David Berg of Viking Travel opposed cuts to the ferry system, especially those that would disrupt service for people who’ve already purchased tickets. “Changes to ferry schedules are not like the airlines,” said Berg. “The airlines you can change tickets one, two, three, four maybe even six hours. But ferries if they’re cancelled, you have a cancel of one or two days means changing entire trips around, eliminating stops and cancelling lodging a tour that have been made sometimes months in advance.”

Finance committee chairs expected to continue work on their version of the budget through the weekend. The spending could go to a vote on the House floor by Wednesday or Thursday. Once it’s passed by the house, the Senate starts work on the operating budget.