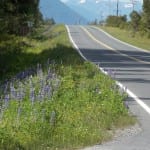 A bill that seeks to restore some public comment opportunity for herbicides spraying along state highways had its first hearing in a House committee this month. Residents and local government representatives continued to voice concern about impacts that chemicals could have on fish streams, plants and wildlife along state roads.

House bill 53 had its first hearing by the House Transportation committee. Two of the bill’s sponsors are from Southeast, Democrat Jonathan Kreiss-Tomkins of Sitka and Ketchikan independent Dan Ortiz. Kreiss-Tomkins outlined the features of the bill. “It restores a regulatory standard, what used to be regulatory, it would be statutory if this bill were to pass, that existed several years ago, that requires public notice in areas where I think conspicuous is the operative word, where pesticides would be applied on public rights of way and will also allow the public an opportunity to comment,” Kreiss-Tomkins said.

The bill would also require the Department of Environmental Conservation to issue a decision that spraying would not harm fish or drinking water sources.

In 2013 the state removed a DEC permitting requirement for state agencies wanting to spray on state land. The DEC no longer has to hold a public comment period on spraying plans or issue a decision on whether spraying could occur. Instead, agencies like the Department of Transportation only have to draft a statewide plan for pesticides and then publish a notice in a newspaper before the spraying happens.

The DOT’s statewide maintenance chief Mike Coffey told the committee that pesticides are a tool for controlling invasive plant species and for helping the state save money. “We believe it is an effective tool in dealing with invasive species,” Coffey said. “There are certain areas, guard rail areas, around fences, around signs, mechanical means just don’t work. And so we’re working on using that, it’s a tool. We can actually control vegetation around areas where mechanical means we cannot. And we’re still working on the cost effectiveness on other areas.”

Coffey said the DOT has had three small herbicide applications around the state. The agency also wants to spray along a state road near Thorne Bay on Prince of Wales Island. Those plans have generated opposition from around Southeast, including petitions from residents and resolutions of opposition from numerous communities.

Public testimony at the hearing was overwhelmingly in favor of the bill. Municipal government representatives from Petersburg, Wrangell, Sitka and Prince of Wales testified in support. A number of communities have passed resolutions seeking to reinstate the public comment period and others have turned in several petitions opposing DOT spraying.

Grace Renee Singh, a special assistant to the president at Central Council Tlingit and Haida Indian Tribes of Alaska, spoke on behalf of council president Rick Peterson. She focused on Prince of Wales Island. “The few industries we have on the island, mostly tourism and fishing, that would be affected by herbicidal spraying,” Singh said. “And we think it would be irresponsible for the state to sacrifice those few industries that most of our residents depend on for employment in order to save money.”

Joshua Smith, a high school student from Hollis on eastern Prince of Wales, testified in support as well. He was concerned with chemical contamination of plants on the island. “During the summer when we get a chance, my Mom and I like to go and pick berries along the road to give to the elders so that they can make jam for other people,” Smith said.

Another person testifying, Petersburg commercial fisherman Doug Fleming worked for 23 years as a fishery biologist with the Alaska Department of Fish and Game. “Peer reviewed research has documented transport of herbicides into streams from roadside projects such as what we’re talking about,” Fleming said. “A program based on very limited experience as Mr. Coffey described may leave us with big unknowns relative to the deposition and harm from chemicals into our wetlands that are criss-crossed with many small streams used by a variety of species and life stages and their food webs. This outcome could bruise Alaska’s earned reputation and marketing angle using pure waters and wild salmon.”

Others testified in support of the bill from Talkeetna, Homer and the Mat-Su Valley.

One person was opposed to the bill. Ken Perry of Pied Piper Pest Control, a company based in Anchorage offering insect and rodent control, opposes the measure. “If this bill is put forward, we will return to the excessive amount of time that is put in by DEC pesticide individuals hearing the same testimony over and over again,” Perry said. “There will be an increased expense of nearly a quarter a million dollars a year as a result of this to the state budget.”

The state anticipates having to hire two people based in Anchorage to oversee the pesticide spraying requirements. The committee held the bill for additional hearings.