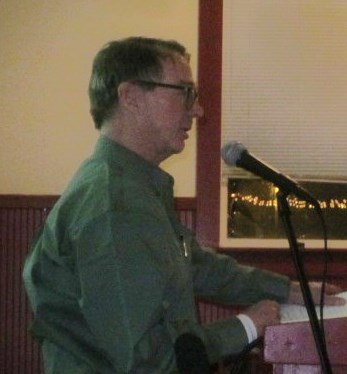 An official with the Ketchikan shipyard made his pitch for more technical training for the future workers in a maritime industry in Southeast Alaska. Director of shipyard development Doug Ward spoke at Saturday’s annual banquet for the Petersburg Chamber of Commerce and outlined ways to train young people for new jobs in shipbuilding and other industries.

Vigor Alaska operates the Ketchikan shipyard and it’s owned by the Alaska Industrial Development and Export Authority. The shipyard is building two new Alaska class ferries for the Alaska Marine Highway System . The shipyard’s Doug Ward noted the smaller day boat ferries are something of a controversial topic in Petersburg, a community dependent on the larger and older, mainline ferries. “But we’ve got to have a new fleet of vessels and they’ve got to be designed for the economics that are affordable in today’s fiscal and economic climate,” Ward told chamber members Saturday. 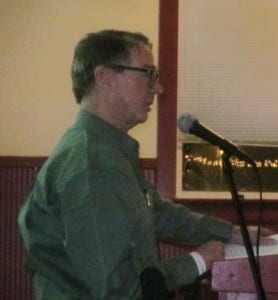 He thought eventually the shipyard workforce could swell to 350 people to help build new fishing boats for the Alaskan fleet. He said the company needed 100 people in the next year to help build the new ferries. “So if you know anybody that’s career oriented, they don’t have to be the best welders,” he said. At that point he received a signal from the audience and he laughed, “Cut me off, huh? We’re taking your kids. Because you’ve got shipyards and marine stuff down here,” he said, adding, “They come down and learn some of that fabrication and they come back up here and help you guys in your shipyards here.”

Ward introduced the chamber members to one Ketchikan student who’s looking to make welding his career and is in a pre-apprentice program at the shipyard. He outlined the history of the shipyard and some recent efforts to plan for the workforce needed in Alaska’s maritime industry. Ward wanted more recognition of the money that private companies already pay to train future workers and explained that money could be coupled with money from government or charitable sources. “And that’s how we begin building a career and technical education system that makes the public funding supplemental to private investment,” he said. “There’s enormous investment in training and it’s never recognized by government. We’ve got to end that.”

Petersburg’s chamber members also heard from Sitka Republican state senator Bert Stedman who briefly address the state’s budget crisis. He thought Southeast was better suited that other parts of Alaska to get through the billion dollar state budget deficits and he used a weather metaphor to describe the state’s fiscal crisis. “I think it’s not going to be a light wind” Stedman said. “It’s gonna get pretty nasty quite frankly until we can get a handle on it in the next three years or so. But we have a lot of infrastructure in place to be able to withstand a frankly a gale force wind coming right at us. We got our coast pretty much secured, we got our harbor system, we’ve got our water and sewer systems, we’ve been working on our electrical generation for our fish processors.”

Also Saturday, the chamber gave it’s annual business of the year award to Hammer and Wikan True Value Hardware Store. Chamber MC Donnie Hayes and said the store was named among the top 13 stores in the nation for the hardware franchise. “There are 45-hundred other True Values and this is the first time a True Value in Alaska has been chosen in the top 13,” Hayes said. “We all go into the store, we all know how friendly they are. We know how they take care of us. We know how they employ members of our community. With great pleasure the Chamber of Commerce this year thanks and gives appreciation to Hammer and Wikan True Value.”

Business manager Lee Corrao accepted the award and thanked the hardware store’s employees for their work.