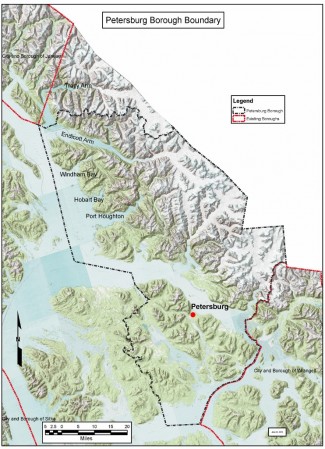 A consulting company drafting Petersburg’s comprehensive plan will be recommending the new borough exercise zoning and subdivision authority throughout its municipal boundaries, not just within the limits of the old city of Petersburg. The planners visited Petersburg last week and offered a sneak peek of draft planning documents that are expected out later this month.

The consultants met with the borough assembly, school board and other groups this month, presenting an early look at a draft comprehensive plan. That document looks at land use, existing facilities and challenges facing the borough.

During a meeting with borough assembly members, Chris Beck of the Anchorage firm Agnew Beck said the draft plan would include a land use map for the entire borough. “A typical comprehensive plan has a land use map, a generalized land use map that expresses the geography of the intentions of the borough for its future and identifies areas where you anticipate more intensive development to take place, or where you want to insure that there’s a lot of flexibility but it still retains the qualities that people like about lower density disbursed residential areas,” Beck explained.

That land use map would be the first step toward potentially zoning the entire borough, incorporated in 2013. Boroughs and cities are the two forms of local municipal government allowed in Alaska. And zoning is one of the powers a borough government can adopt. Zoning means setting allowable uses for land in different areas, residential, business, industrial and other categories, and setting a process for requests that come in to build something other than those allowable uses.

Beck thought that authority could help with future conflicts. “Certain uses have the potential to really affect your property values and your life,” he said. “If my neighbor decides to open a wrecking yard and store a lot of wrecked cars and work on them whatever hours they choose, or if somebody wants to do a log sort facility or a mill, if somebody wants to do a major gravel or rock quarry, right now they can do that right next to a $400,000 house I just built overlooking the water. And in those instances our suggestion is that you set a high threshold, most everything everybody is doing that’s fine but those things that affect the neighbors, affect the value of your property would have to go through a conditional use permit process.”

Petersburg exercises zoning authority within service area one, the old city limits, but not in the rest of the new borough. And there’s a conditional use permit process in service area one that doesn’t necessarily prohibit uses impacting neighboring property values. One recent case in point, the borough granted a conditional use permit for a fishing gear storage building on residential land on Arness Heights Drive south of town despite the objections of a neighboring property owner.

Borough assembly member Bob Lynn told Beck that a promise in the formation of the new borough was no zoning extended outside the old city limits. “And I can tell you people outside of town that I’m associated are not at all in favor of it.”

Borough manager Steve Giesbrecht said other remote home owners have voiced support for some zoning in the new borough.

Ultimately it would be up to Lynn and the rest of the assembly to decide on an ordinance to extend that authority to the rest of the borough. It’s also important to note that the borough’s charter specifies that the city of Kupreanof is responsible for zoning within that city. The charter also says the borough will adopt a comprehensive plan and the plan will “set forth goals, objectives and policies governing the future development of the borough.”

Beck said the company would also be recommending the assembly extend subdivision authority throughout the borough, not just in service area one. That power would give the municipality some control over minimum lot sizes, required easements or rights of way and other standards for subdivisions in the greater borough. 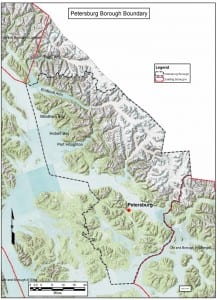 One possibility for making zoning and subdivision regulation more acceptable for property owners outside service area one would be if the local government looked into helping private land owners with wetlands fill permitting through the Corps of Engineers.

Planners think eventually the population and development in the borough will grow again, but after the local community weathers an economic tough period. Agnew Beck’s Shelly Wade highlighted some emerging themes in the plan, including a declining population, and a population that will have a larger percentage of seniors. “Public facilities and services is a big umbrella topic for a number of things that includes, how do we address an aging senior population in Petersburg,” Wade said, adding, “So there’s a component or goal related to senior care. There’s also a goal related to the schools. So we heard what’s important or what do you like best about Petersburg? More than anything people raised their hand and say schools, our schools are important our excellent schools, so, how do we sustain that?”

Assembly member Lynn wanted the plan to have reasonable expectations given the fiscal future for the local government. “We’re looking at a billion dollar shortfall in the state budget over the next few years. When you come forward with your priorities and so forth are you going to take that into consideration so that we’re not going to have the money in the future we have now, nowheres near. And so we’re at a point where the projects we’re gonna be able to take on are going to be limited, very limited.”

Given the budget outlook, the consultants pointed out that Petersburg would have to come with new ways of maintaining the buildings and services it has now, not to mention new projects or services. Chris Beck thought there were two possible paths for the community. “One is kind of continuing the path you’ve been on and you go down. You lose funding, the school gets worse, people decide not to live and raise their families here, the hospital gets worse. We can show it maybe graphically in some simple form that path with some annotations. If you continue as you are today that’s what happens. Or you have to take a very different path. And that trajectory is growing as a town, creating more demand that supports the airline, that creates more jobs and that’s sort of the paths in the future but to do nothing is to go down.”

One difference with this planning process, is a focus on Petersburg’s harbor facilities, something left out of the last comprehensive plan for the town. Agnew Beck and several other companies are drafting a master plan looking at existing and potential waterfront facilities, along with costs of operating, maintaining and replacing the docks and floats and boat ramps. Beck said the good news was that moorage rates are covering the cost of operating Petersburg’s harbors. “But still there’s a need to discuss a strategy for eventually replacing facilities that ultimately will wear out. And we talked a bunch about that subject this morning with the harbor commission.”

Some of the harbor master plan will cover the potential for boat work in Scow Bay, and possible public private partnerships that could encourage other businesses to start up there.

A draft of both the harbor master plan and the comprehensive plan are expected to be released by Agnew Beck in the next couple of weeks. A comment period will run through the end of June and the final documents are scheduled to published by October.