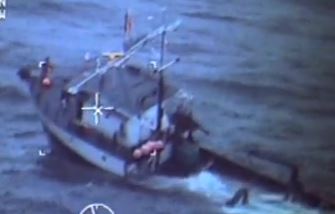 Four people are safe after their fishing tender sank off Cape Fairweather early Wednesday morning, June 10th. A helicopter from Air Station Sitka hoisted the crew of the 80-foot tender, just as the vessel rolled and sank in six-foot seas near Lituya Bay.

The Kupreanof was en route from Petersburg to Bristol Bay to tender salmon when it ran into trouble at about 3:45 AM in an area known as the Fairweather grounds, about 110 miles northwest of Sitka. 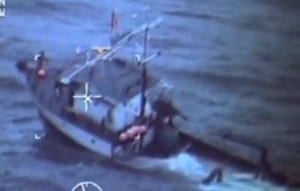 Chris Stoeckler was the pilot of the Air Station Sitka rescue helicopter. He says the Kupreanof was already partially submerged by the time he arrived. The rear deck — or port quarter — was already awash. The four members of the Kupreanof’s crew were in the bow wearing their survival suits. Their liferaft was deployed at the stern.

Stoeckler says he instructed the crew to abandon ship. “One guy jumped onto the raft. The others had to swim out. We put Jason down into the water. He helped three people get into the raft.” That’s Jason Yelvington, the helicopter crew’s rescue swimmer. Stoeckler says the four hoists took about 20 minutes, which is all the time the Kupreanof had left. “The last basket hoist, the boat sank, and took the raft with it.”

Rescue swimmer Yelvington says in a situation like this, where sinking is imminent, he prefers to do his work in the water rather than on the distressed boat. “Whether it sinks or not, there are a lot of hazards, for them to hit their head, cause a bigger injury trying to move around. I’ve got fins on usually, taking them off to move around on the boat and help them — it’s usually just a lot easier of an evolution for us if everyone’s in the raft in one area that I can get to, and swim them from there.”

Yelvington says there was a lot of diesel fuel in the water, and breathing the fumes made the work harder. He appreciated the fact that the crew members of the Kupreanof were all functioning well under trying circumstances. He says it’s often not until everyone’s safely aboard the helicopter that they’re hit by what’s just happened. “There’s not a lot of opportunity for conversation, so I think they go through a lot of the interior stuff that happens on the way back, and get a chance to calm down. That could be helpful to someone, to reflect on what just happened.”

A good Samaritan vessel, a ship, according co-pilot Ben Neal, also responded to the Kupreanof’s mayday, but notified the Coast Guard that it would have been difficult to recover survivors from the water, had that been necessary. Nevertheless, the good Samaritan would have been useful if something had gone wrong.

But Neal says a lot went right, thanks to the advance preparation of the Kupreanof crew before they set out across the Gulf. “Before they ever got underway, they had done a drill where they got their Gumby suits out and inspected their equipment. That was probably critical in how prepared they were today. They really did have things well organized. They were pretty calm. And they called for help at the right time.”

All the survivors, and rescue swimmer Yelvington, were checked out by emergency medical personnel once they returned to Sitka. Other than their exposure to diesel fumes, all were released without injury.

The Coast Guard Marine Safety Detachment is investigating the cause of the Kupreanof’s flooding.

The coast guard has posted video from the rescue here.