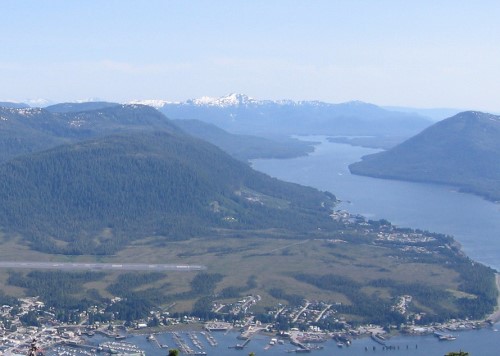 The U.S. Forest Service and Alaska Mental Health Trust have signed an agreement to move forward with a land exchange in Southeast Alaska. The two sides say the agreement is a milestone in a long process of swapping some Tongass land for acreage near a half dozen Panhandle communities.

The Forest Service would be giving up to 21,000 acres of Tongass National Forest land in exchange for 18,000 acres of Mental Health Trust land near Juneau, Ketchikan, Sitka, Wrangell, Meyers Chuck and Petersburg. The two agencies signed what they’re calling an Agreement To Initiate at the end of June.

“It’s sort of like a business plan that lays out pretty much a road map that shows how the exchange process would happen,” said Kent Cummins, spokesperson for the Forest Service on the Tongass.

He said the lands the Forest Service would be taking over include some scenic backdrops of the communities and some lands with popular hiking trails. “Through public process we’re gonna inherit some trails, like Deer Mountain trail, Mount Bradley in Juneau, Deer Mountain’s in Ketchikan. So there may be opportunity in the future through partnerships and things to enhance those trails that are already existing, just depending on what the public would like.”

The Trust Land Office generates revenue off its land for mental health services statewide and had proposed logging some of the parcels to fulfill that mission. Those logging plans ran into opposition, however. Just south of Petersburg a group of homeowners organized against timber cutting proposed for the steep hillside above their homes. Instead, the exchange would shift those logging and revenue generating plans to the Tongass lands the Trust land office would take over. Those lands are on Prince of Wales Island, near Naukati and Hollis, along with Shelter Cove on Revillagigedo Island south of Ketchikan and some land near the proposed Niblack mine on Gravina Island.

Morrison said this summer’s agreement is a large step forward for the swap. “It’s the first time the exchange becomes somewhat of an official project. And sets forth a course, a process to be followed to complete the exchange.”

Both sides said there are years to go in what could be a decade-long process to make the exchange happen. The Forest Service’s Cummins estimated it could be another three years or more before the swap actually is finalized. “It’s a long process but I think in the end it’s a win-win for both parties,” Cummins said. “The land that we’re conveying, that we could convey to them is up to about 21,000 acres and those lands are more suited for development so that they can meet their mission as well.”

Cummins said the process includes an environmental impact statement and opportunity for public comment on the exchange. In 2012 the concept of the swap received support from the Tongass Futures Roundtable, a collaborative group with representatives from several environmental groups, tribal governments and corporations, the fishing industry and the US Forest Service.