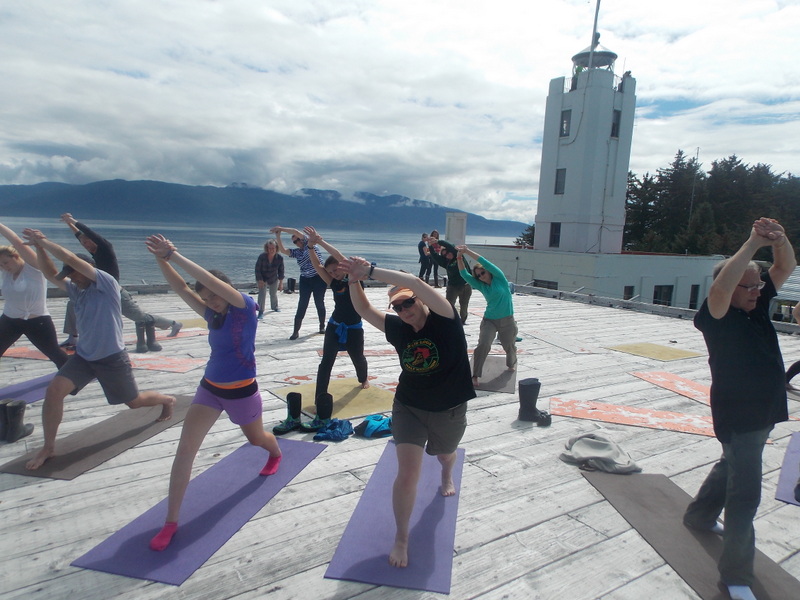 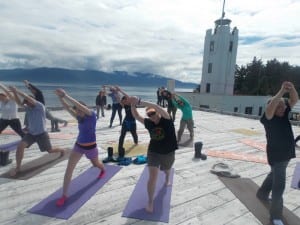 Five Finger Lighthouse has been in operation since 1902. It was the first United States lighthouse built in Alaska. The coastguard stopped manning the light in the 1980s as it switched to automatic. The lighthouse, home to generations of light keepers, fell into disrepair.

Recently a non-profit called the Juneau Lighthouse Association has helped establish a permanent summer presence in the building through encouraging whale researchers to come study there. Now though they want to expand and the only way to do that is cruise ships.

“We all live together here on this small island so everybody knows everybody else,” says Paul Sharpe, the 2015 Lighthouse Keeper. “The crows and the eagles and the marine mammals we all sort of put up with each other.”

Sharpe is in charge of looking after the place although he says the term lighthouse keeper is a not quite accurate.

“It’s a bit of a misnomer because really we take care of everything but the light,” he tells me.

While the Coastguard maintains the light, the everything else Sharpe is talking about means his home for the summer.

The view from here is all rainforest covered mountains, snowy peaks and wild seas. But the lighthouse itself is something of the more homey variety.

With money raised by the Lighthouse Association and a bit of love and care people like Paul Sharpe have made this into a home. Bottles of wine are laid out on the counter, wooden snowshoes hang down from the ceiling and old pictures of suitably bearded former lighthouse keepers adorn the wall. 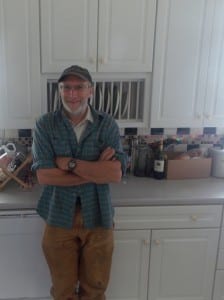 Paul Sharpe, the Lighthouse Keeper for the summer 2015 season, stands in his kitchen.(Joe Sykes)

“Believe me this is much better than what it used to look like,” Sharpe says.

Keeping a place like this livable and accessible is difficult. Since 2011 the Alaska Whale Foundation has been researching Humpbacks from the island and that kind of work together with the upkeep of the 1932 art deco building costs money.

“This lighthouse has served well and been really important to a lot of people. What are our choices. We let it die and decay and fall apart or we can help it reinvent itself,” Sharpe says.

And today is part of that reinvention. About 70 tourists land on the south end of the island, replete with sun visors, backpacks and yoga mats. The island’s never had this many tourists on it before. One of the reasons is its not easy to access. The cruisers have to clamber across hidden rocks while the skiff’s captain negotiates the rising tide. 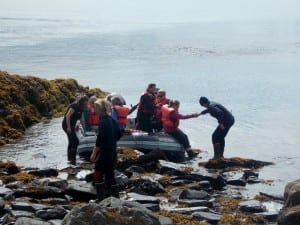 Tourists arrive by skiff on the south shore of the island.(Joe Sykes)

A couple of those tourists have come here all the way from the Berkshires in Massachusetts. Judie Grossman says it was a tough entry but she’s thrilled to be here.

“It’s fascinating and I’m not a young chick,” she says. “I looked at what we had to do and I thought I’m not going to be able to do this but then I decided I wanted to do it and I’m doing it.”

They head into the Lighthouse which is now teeming with people. There are sweatshirts and postcards laid out on the table. Paul Sharpe’s even turned into a businessman flogging souvenirs.

“I just sold a t shirt actually,” he shouts to me across the room.

But it’s not just the shop that’s causing excitement. Judie Grossman’s granddaughter, Lily, is an 11 year old New Yorker who’s just come down from the top of the light.

“I don’t think I’d like to go up those stairs every day,” she said.

“Do you have an elevator in your building in New York?” I asked her.

“Yes we have 4. I barely ever climb the stairs,” she giggled.

Both the tourists and the lighthouse are trying out something new. And Paul Sharpe says in the long run this is how this place and the whale research that goes on here will survive.

“This is how we funded our replacement hydrophone,” he said. “It’s actually really important for us. The more the merrier. You know in a couple of hours they’ll be gone, it’ll be really quiet here and we’ll be all by ourselves.”

For now though they’re still here and the only way to wind down an afternoon on a craggy outpost in the middle of Frederick Sound is with a mass yoga session on top of the helipad. 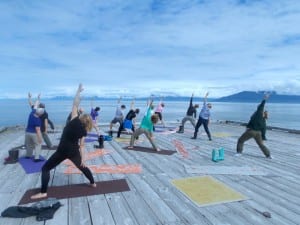 A mass yoga session on the helipad of the lighthouse.(Joe Sykes)