Borough one step closer to getting exemption question on ballot 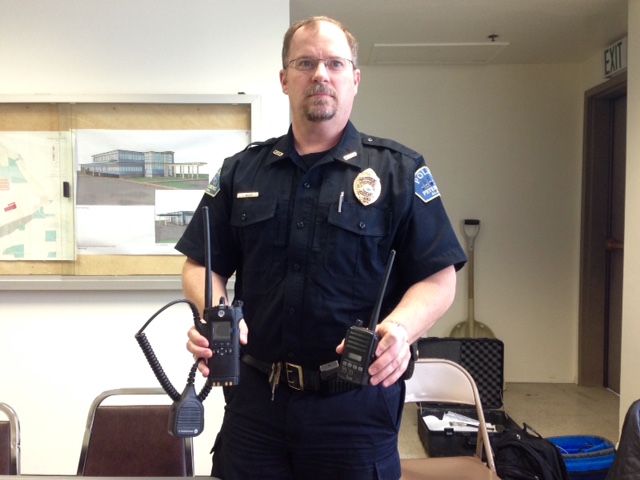 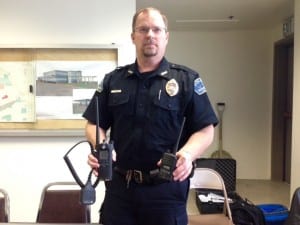 Police Chief Kelly Swihart holds one of the new portable radio (left) and the old one. Photo/Angela Denning

The Petersburg Borough Assembly Monday gave the final approval to an ordinance that changes the fiscal year 2016 budget.

Acting Mayor, Cindi Lagoudakis, explained some of the modifications before the assembly voted.

“These are in part the boiler rebuild for Parks and Rec, the sewer upgrades for Haugen Drive, things that were discovered in the course of doing the work out there, back up computer for waste water and sanitation, and water valve box purchase,” she said.

There was no discussion on the issue. The assembly approved it unanimously.

The assembly agreed on another ordinance which would allow people running for public office to be exempt from filing financial disclosures required by state statutes. The borough’s ordinance states that the practice has left some Petersburg residents unwilling to run for a seat on the assembly, school board, or planning and zoning commission.

The ordinance would put the question on the ballot in the October 6 municipal election asking for voter approval.

Lagoudakis read from the ordinance, explaining that there are other avenues the public could take.

“The purpose of the Public Official Financial Disclosure Law is to prevent an individual from using a public position for financial gain,” she said. “Assembly members are expected to recuse themselves from any vote in which they may have a financial interest. Our borough charter does not allow a public official to hold a paid borough position during their elected tenure and for a year afterward, and outlines a recall procedure for citizens to use if needed.”

The ordinance will be considered for its third and final reading at the assembly’s next regular meeting.

Also at the meeting the borough got updates on police radios, the Crystal Lake hydro-plant and the new columbarium.

The police department has begun to use their new portable radios. Twenty new radios were purchased for about $60,000 through grant money and are supposed to provide better coverage in the core area. They will be used by police officers and fire department command staff.

Borough Manager, Steve Giesbrecht said, “We programmed them with the minimum, minimal channels at the moment. We’ve got some licensing with FCC that we’ve got to work through so we can’t use the full spectrum of the radio.”

Petersburg’s Crystal Lake hydro-electricity will be shut down temporarily to fix a problem; to replace a needle valve. The maintenance project is scheduled to begin Tuesday and last for a couple of weeks. During that time Petersburg will be getting all of its power from other hydro power plants at Tyee Lake and Swan Lake. Residents should not be able to notice a difference.

Also, the borough assembly got an update on the new columbarium, which is used to house urns at a cemetery. A columbarium is scheduled to be installed at the local cemetery on August 10. The project is being coordinated by the Parks and Recreation Department.