Public opinion sought in road project between Kake and Petersburg 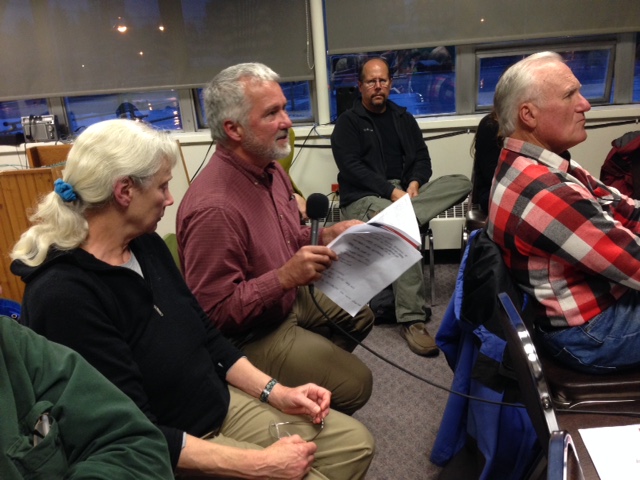 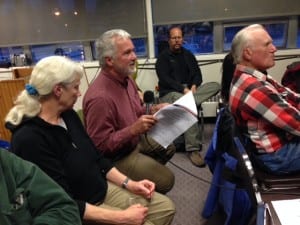 David Beebe of Kupreanof speaks at the Kake Access meeting in Petersburg, Sept. 10.

The project to improve transportation access to the Southeast village of Kake is moving forward with more studies looking at building a road between the village and Petersburg on nearby Mitkof Island.

Kake is a town of about 550 residents on the Northwest side of Kupreanof Island. Residents there have trouble getting in and out of town for goods and services. That’s the message that’s been repeated at several meetings in the last two years and it’s the purpose behind a project known as Kake Access which has been initiated by the Alaska Department of Transportation.

The federal government is also on board.
Seth English-Young works for the Federal Highway Administration, the lead agency doing the Environmental Impact statement (EIS). He spoke at a recent meeting in Petersburg in front of about 15 residents and half a dozen other project workers.

“I know many of you were here in March of this year and so we’re just sort of following up on that,” English-Young said.

Before taking public comment, he reviewed the project’s purpose which is to increase the opportunity for Kake residents to get goods and services in other places, decrease their travel costs and the round trip time it takes to get to and from town. The project has looked at 21 alternatives for roads or a ferry route between Kake and Petersburg. They’ve now narrowed them down to two road options. Both road alternatives would require crossing the Wrangell Narrows and cutting through Kupreanof Island. A third alternative is ferry only and would require increased ferry service between the communities. 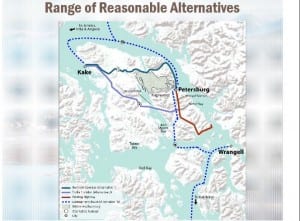 The state legislature appropriated $40 million dollars in 2012 to construct a road between the two towns. But that’s just the start. Building a road is estimated to cost around twice that amount.

David Beebe of Kupreanof has been an outspoken opponent of a road being built.

“It seems like a whole bunch of money and not commensurate with the need,” Beebe said.

Several other residents questioned the cost of the project in a time when the state doesn’t have much oil revenue. They also questioned the purpose of the road.

Dave Holmes said he went to a U.S. Forest Service meeting this Spring about getting a power line to Kake.

English-Young with the Federal Highway Administration agreed with that statement but said that the road and the power line are considered two separate projects in the EIS.

Although some residents have voiced frustration that they are repeating their same concerns, English-Young said the government workers are listening.

English-Young said they are documenting it all as part of the process of doing an Environmental Impact Statement. And they plan to conduct a phone survey in both Petersburg and Kake to get a broader view of public opinion on the project. 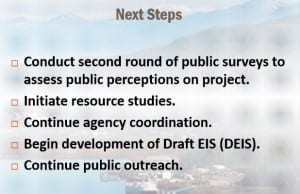 English-Young said they’ve heard from many supporters for the project in Kake but not everyone agrees.

“There are people there including the mayor who are very for the project and then there are people who are on the fence and I’m sure there are some people who are against it and the goal of this next round of public surveys is to determine what the perception in the community is, in both communities, both sides, Petersburg and Kupreanof, and then also in Kake to see if there is support for the project,” he said.

The project team expects to have a draft Environmental Impact Statement in 2016 and a final EIS in 2017.

More details on Kake Access can be found on the project’s web page.