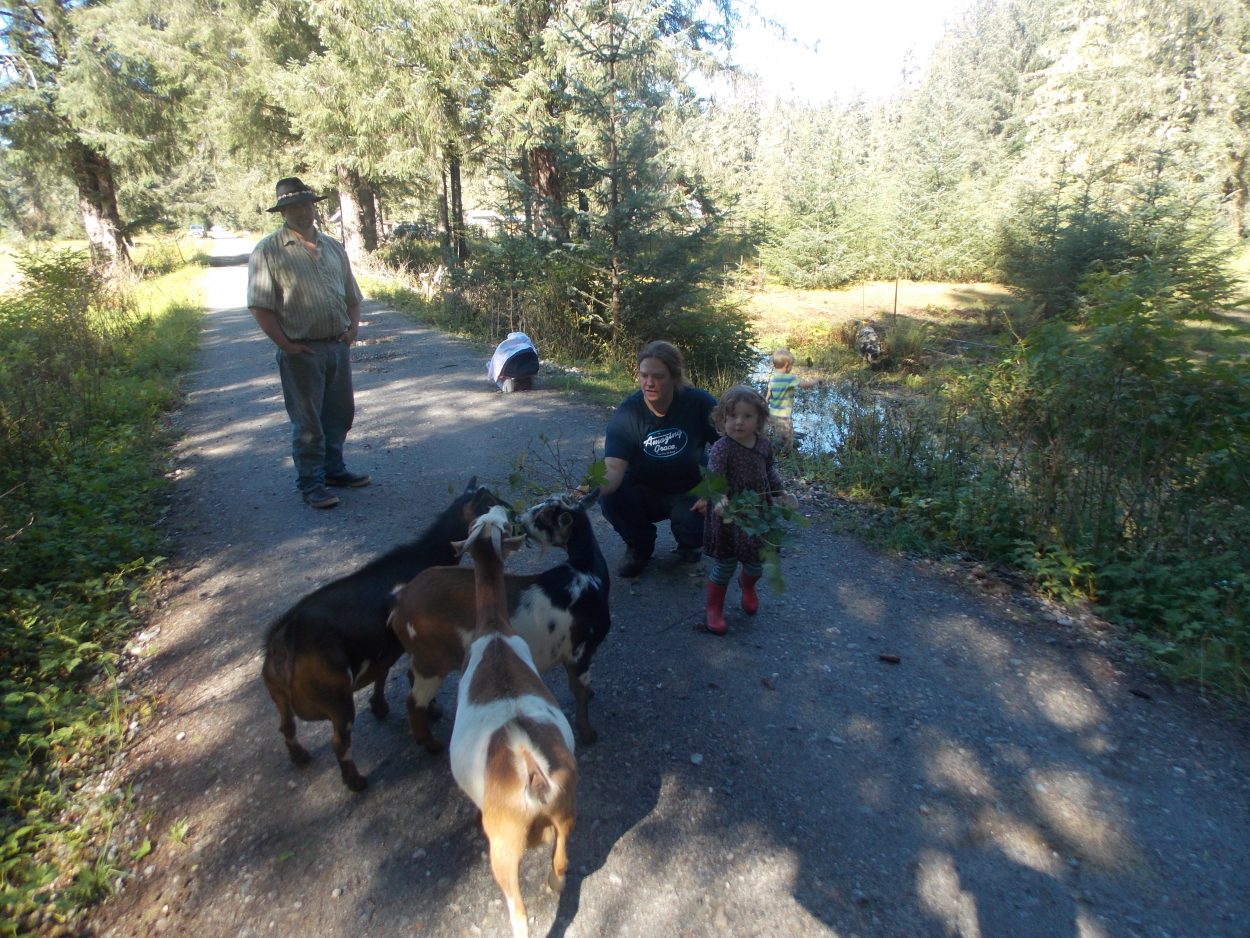 Buying fresh dairy produce in Southeast Alaska isn’t easy. The rugged, mountainous landscape doesn’t lend itself well to farming. Now, though, a farming couple near Petersburg are trying to change the way people consume milk in town. For the past year they’ve been selling raw milk processed by their own heard of dairy goats. But producing and selling dairy products in Southeast Alaska provides its own unique set of challenges.

It’s a bright fresh morning on Frederick Sound. I’m headed to Point Agassiz, about a 30 minute skiff ride from Petersburg. We pull up to the dock and jump into Victor Nelson’s beat up old Jeep.

You gotta love Agassiz rigs,” said Victor Nelson. He’s lived out here with his wife Tabitha for the past 15 years. There have been homesteaders on Point Agassiz since the early 20th century but the Nelsons are now the only family who live here year round.

“This is actually the original schoolhouse here, back turn of the century,” said Nelson. “So this is my farm here. We’ve got chickens, these are all our does. Soon to be milkers and milkers. And then baby goats over here 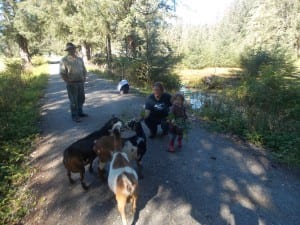 Victor and Tabitha Nelson and their daughter tend to some of their over 30 goats on their farm at Point Agassiz on the mainland north of Petersburg.

The animals roam wherever they want. Owning space like this for farming in Southeast Alaska is rare. And these animals are nothing if not free range. As we get out the car a large spotted pig waddles up behind us. “Piggy. Piggy, Nelson said. “Yeah you know me. I’m the hand that feeds you.”

But for the Nelsons the goats are where the money’s at. Although Tabitha Nelson says they got into the goat game by accident. “We started with two goats and just for raising quality that doesn’t have all that industrialized stuff in it and people kept asking us so we decided to buy a few more and a few more and now there are over 30,” she said.

In a field in front of us there are about 12 baby goats frolicking around in the long grass. They’re pretty damn cute but Tabitha Nelson said the people of Petersburg also go mad for their mothers’ milk.

“I don’t think we could ever meet the demand for Petersburg,” she said. That’s because in recent years people have really started to think about what they are buying in the supermarket. Petersburg’s now got a summer farmer’s market and many in town want to buy local. But the Nelsons are also limited when it comes to selling the milk.

“I don’t really like the system because sometimes I can’t get a hold of people,” she said. “And I can’t technically sell that milk because it belongs to them.

It belongs to their customers because the Nelsons don’t pasteurize their milk. Unpasteurized dairy products have been known to carry diseases like e coli. So in Alaska you can only buy raw milk through what’s called a herd-share agreement. You’re basically paying for a part of the goat instead of paying for the milk itself

But for farmers like the Nelsons who live a 40 minute boatride away from town, that system causes problems. “It is hard,” she said. “Sometimes we wait for people and they forget and we have to call them and with the tides and everything that just makes it harder for us. Living out here isn’t the greatest situation for this kind of a business.”

While the laws limit their ability to sell, it does mean they know each and every one of their customers. Although Tabitha Nelson said customer service is not really what she got into the dairy farming for. “The worst part of my week is having to call everybody and arrange the pick up.

It’s a solitary life out here. Tabitha has lived on Point Agassiz since she was five and she said she wouldn’t have it any other way. “We did go to public school for a year or two in the winter time. And my teacher’s were like ‘I think you need to get her back out there.’ All she writes about in her stories and journals is Point Agassiz.”

And so, however hard it is to farm over here, the goats give the couple and their three children the life they want to lead. And today is selling day. When we go back inside Victor is packing up a crate of milk out of the fridge to take over to Petersburg.

Before we set off though I have a burning desire to know what goat’s milk tastes like. “I don’t know if you’re used to fresh milk?” Tabitha asks.

And with that we’re ready to leave, back over Frederick Sound to Petersburg where Tabitha sets up shop by the south harbor ramp

Petersburg resident Gina Esposito’s had a share in the farm since it started and she says buying local just makes sense. “The more you learn about where food comes from, the more paralyzed you feel about what you want to buy,” Esposito said. But it’s not just about ethical purchasing. “It really makes nice frothy lattes as well,” she added.

And with local food and lattes at the forefront of some residents minds, the Nelsons think goat farming will help fund their homesteading, Alaskan lifestyle for many years to come.