Voters Tuesday agreed to remove a financial disclosure requirement for Petersburg elected officials and the vote was not close.

In unofficial results 306 people said yes to the only question on Petersburg’s ballot this year, compared to 93 no votes. That’s a margin of more than three to one. That measure asked to exempt local candidates from filing income information with the Alaska Public Offices Commission. The same question was on the ballot and failed narrowly last year, when turnout was much higher at 39 percent.

This year the turnout was just over 15 percent, or 407 ballots cast out of the two thousand six hundred and 31 registered voters in the borough. Financial disclosure was required for borough assembly, the school board and the planning and zoning commission along with the borough manager. 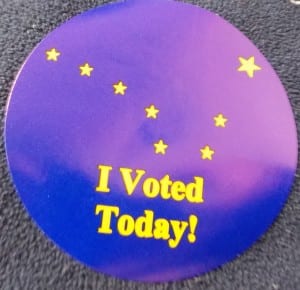 The only contested race on the ballot was for harbor board and it looks like one incumbent lost his seat on that advisory board. Three candidates ran for two seats and fisherman Bob Martin was the top vote getter with 312. Business owner John Murgas is holding second place with 217 votes while former harbor master Jim Stromdahl trails by 22 votes. If that results hold, Murgas would win the second seat on the harbor board.

No other seats were contested. Newcomer Eric Castro and incumbent Nancy Strand will start up three year terms on the borough assembly this month. Other incumbents faced no opposition for their seats on the school board, hospital board, planning commission and two advisory boards.