Petersburg to send letter to state of Alaska on BC mines

Petersburg will be sending a letter asking the state of Alaska to take a position on proposed mines in British Columbia across the border from Southeast Alaska.

Petersburg’s mayor Mark Jensen Tuesday told the borough assembly he wanted to draft a letter seeking an official stance on mining development and possible impacts to salmon-bearing rivers that flow across the border. “Senator Murkowski’s office is willing it sounds like to present it to Secretary Kerry to try and get the International Joint Commission to meet and to discuss this transboundary river issue,” Jensen said.

The joint commission resolves environmental and resource disputes over waters shared by the U.S. and Canada. British Columbia’s minister of mines and Alaska’s Lieutenant Governor this summer both said they were open to the idea of involving the commission to look at concerns over potential harm to the salmon rivers. 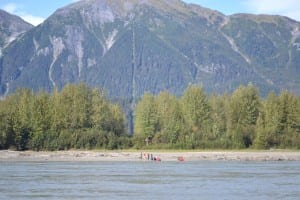 A line of cleared trees marks the U.S.-Canadian border on the Stikine River.

Petersburg passed a resolution last year urging protection of the salmon habitat and greater involvement by the U.S. government in the issue. Assembly members Tuesday had no objections to Jensen drafting a letter to the state seeking to force the discussion.

Assembly member Bob Lynn wanted to see some baseline monitoring of water conditions on the Stikine River and other rivers flowing into Southeast. “If in fact you had a mine breech, or you had a leakage or you had something else occur, even if you went and tested, you would have basis of which to change,” Lynn said.

The Central Council of Tlingit and Haida Tribes of Alaska in September announced plans to start gathering water data from the Stikine, Taku and Unuk rivers using funding from the Bureau of Indian Affairs.