A local poker tournament last weekend raised over 1400 dollars for cancer care in the community. It was the second year for the event held in honor of longtime resident Annabelle Baker, who passed away in 2012.

Annabelle’s Annual Poker Tournament organizers Jeb Morrow and Jeigh Stanton Gregor play poker together and decided to start up a tournament last year in honor of their friend. Baker was also an avid poker player along with her husband Patrick Smith.

“Patrick let us know after the fact that one of Annabelle’s really important thoughts was wanting to be remembered, wanting to leave a lasting mark,” explained Stanton Gregor. “And this is just a really small way that we can keep her memory with us at all times.” 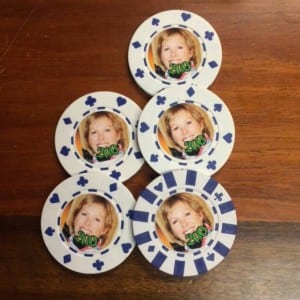 This year the 19 participants raised 1,410 dollars Sunday evening at the Tides Inn conference room. That money will go to the Beat the Odds committee, which funds cancer care, education and travel costs for patients. Baker was a member of that committee, an advocate for cancer care and battled the disease.

“We’re doing this for Beat the Odds not because we necessarily have a real personal relationship with that group but because we had a personal relationship with Annabelle and that was something she was passionate about,” Morrow said. “So, on account of her Beat the Odds benefits from our event but really it’s a tribute to her and who she was as a person, who we knew her to be as a person.”

This year’s tournament didn’t run as long as last year, which can be a hallmark of professional poker tournaments shown on TV running into the wee hours and over multiple days. Morrow said organizers adjusted the amount of chips players were forced to put in as this year’s tournament went on.

“But at the same time it gave us plenty of time in the beginning of the tournament to play your game but towards the end when the chip stacks getting kinda big you need to have a blind structure that matches the chip stacks and I think we nailed it pretty good this year,” he said.

Top prize this year took home 1600 dollars, second place won 1000, third place seven hundred, fourth place 400 and fifth place 200. Stanton Gregor said organizers hope to boost participation for next year. “From a selfish point of view I think of the more people involved the more money we can raise for Beat the Odds and just the greater community support. Ideally I’d like to see 40 next year, somewhere in that ballpark, manageable for the space we use but also it’s for greater competition. Because when I think of Annabelle Baker I think of playing to win and the more people you’re playing against brings out the best in you.”

The tournament had pizza donated by Studebakers and snacks made by the Ragnarok Rollers.

(Editor’s note: In the interest of full disclosure, Joe Viechnicki the reporter for this story is also a member of the Beat the Odds committee that decides on how to use that funding each year)