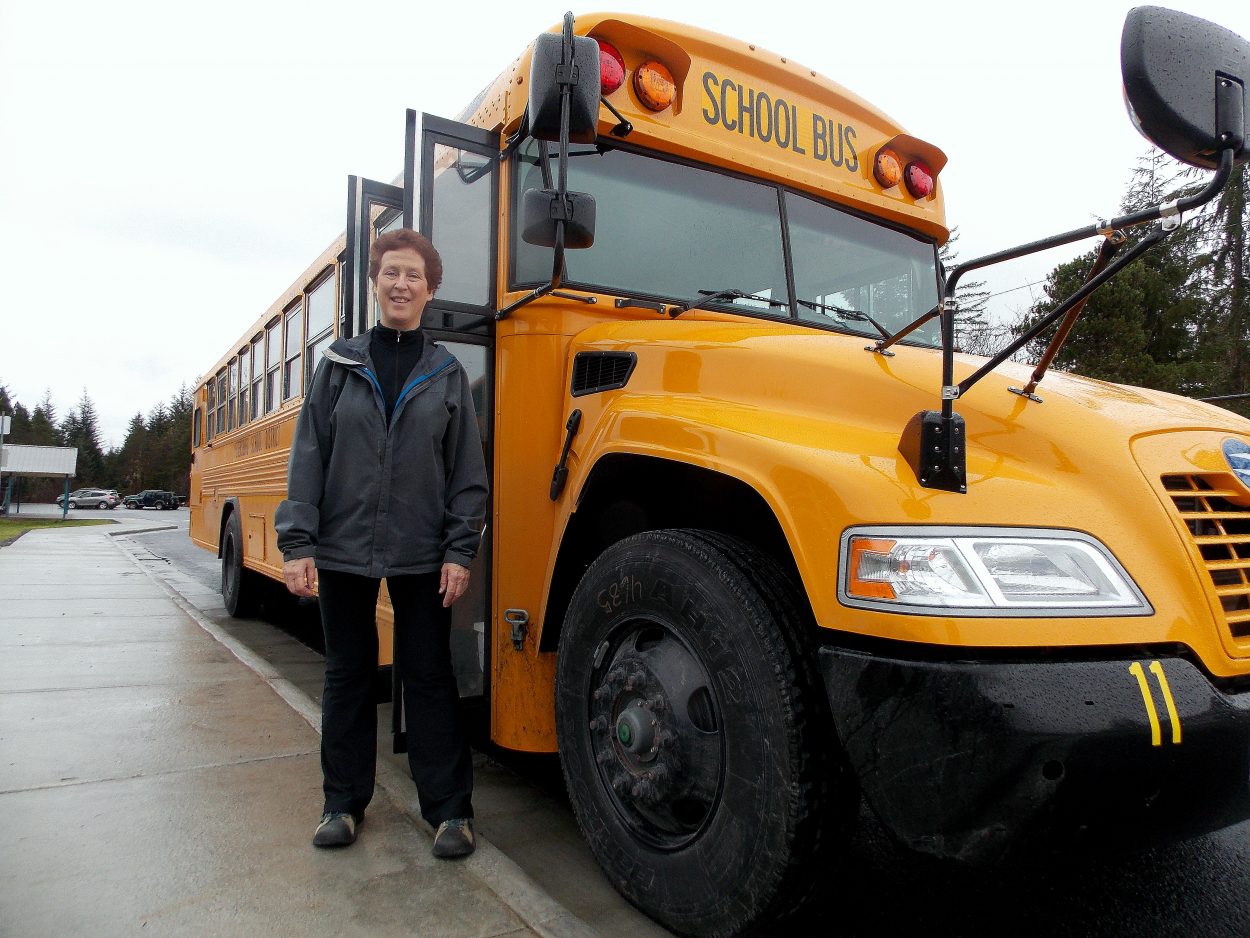 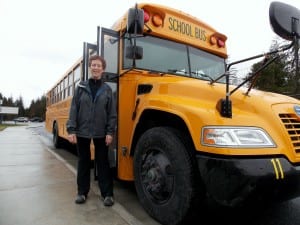 The Petersburg School District is operating a new school bus. KFSK’s Angela Denning got to tour the new vehicle with a veteran driver who says it’s safer and more efficient than the older models.

“You know, we all have our purpose on Earth and I think I was supposed to be a bus driver,” Davidson said.

She’s driven a school bus in Petersburg for 34 years. Every day on the job she’d sit in the driver’s seat greeting children, reaching out her right arm to open and close the door. Well, that’s how it used to be.

“I have no door handle,” Davidson said. “I have a button and it’s operated by air and the doors will open automatically.”

It hasn’t been an easy habit to break.

“Oh, I’m still doing it,” Davidson said. “I’m still grabbing for it and every once in a while and thinking, ‘Oh, wait a minute, I don’t have a door handle’.”

The outside of the bus looks pretty normal. It’s large and yellow. But Davidson says you can’t get any newer. This is a 2016 Bluebird. It was purchased on the East Coast and holds 66 passengers. The seat backs are high complying with new industry standards.

“So overall, what do you think about the new bus?” I asked her.

“Well if you would have asked me this question when I first stepped on it, I was terrified,” Davidson said. “I was terrified. It was air break, I hadn’t driven air break for a while. I mean it was overwhelming. So I just buckled up and buckled down and took this bus out and just experimented with it and now I absolutely love it. It is really cool.”

While the average person might not notice all the bells and whistles Davidson has been through the vehicle with a fine toothed comb.

We head to the back of the bus where there is space for a wheelchair lift and wheelchair. Davidson said it’s not only handicap accessible, the extra room also comes in handy for the kids’ musical instruments.

“We just lay them back here,” Davidson said. “It’s just really nice. They’re secure back here and what not. It’s so much better than having that horn case up among the kids and let’s say we have an accident, those horn cases will become dangerous.”

Some of the newness is less obvious like the chains that drop down from under the bus with the push of a button. They spin under the tires as they roll along creating traction. Davidson will no longer have to manually put on chains around the tires.

“You don’t have to get down and get all wet and dirty because I used to put chains on and I hated it but it was either do or die,” she said.

Davidson lives her life for the bus route routine, going to bed early so she’s alert while most people are still in bed.

“My day in the wintertime starts at 4 a.m. because I’m not only driving the bus in the snow and what not but I have to get to the bus in my own vehicle,” Davidson said.

She has to prep the bus or what’s called “pre-trip”. It takes about 15 minutes. She checks all the fluids and belts under the hood. She checks all the lights and for any air leaks. The new bus adds about five minutes to her prep time. But those are important minutes. Davidson is so orientated to safety that she helps train other drivers in Alaska for the State.

Although Davidson is in her 60s she’s not ready to retire just yet. She says maybe one day she’ll want to but that day is not here yet.

“Maybe I want to start to travel or maybe I want to do something other than driving a school bus but I can’t imagine what it would be,” Davidson said.

For the time being Davidson plans to take it one year at a time and just enjoy her new wheels.