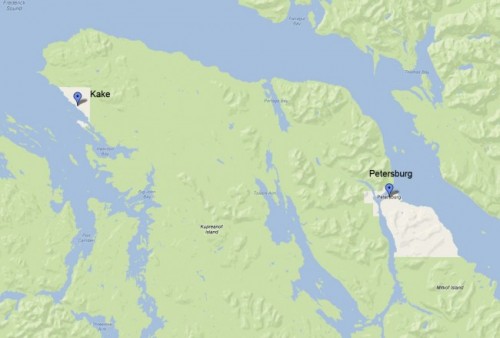 The proposed road from Kake would end at Wrangell Narrows across from Petersburg, where a shuttle ferry would complete the connection. The map does not reflect current Petersburg Borough boundaries. (Map by KTOO)

The state of Alaska continues planning for construction of a controversial road linking Petersburg and Kake. The latest update to an official transportation project list includes $37 million for the road. But that doesn’t mean it will be built.

The proposed road from Kake would end at Wrangell Narrows across from Petersburg, where a shuttle ferry would complete the connection.

It calls for building 27 miles of unpaved, single-lane road and improvements to another 26 miles of logging roads.

They would end across the Wrangell Narrows from Petersburg, where a shuttle ferry would complete the route.

The $37 million on the list is slated for the budget year that begins July 2017.

“It’s our way to show the federal government how we intend to spend federal transportation dollars over the course of the next four years,” said Jeremy Woodrow, spokesman for the state Department of Transportation.

“It doesn’t ultimately mean that we’ll spend those dollars exactly on a specific project when we propose it. But it’s our best plan at this point of time as we work toward seeing each project go to construction.”

The Kake-Petersburg road wasn’t in the last full revision of the state’s project list, which came out in 2012. But it was added the following year, through an amendment. That put the project funding in the budget year that ended this past July.

Transportation planners considered about 20 possible routes and narrowed them down to three. Two are roads with a shuttle ferry. One would increase Alaska Marine Highway sailings.

Both road plans have brought strong criticism. Opponents say they would damage the environment — or waste money, since traffic is projected to be light. Officials say their research shows neither would significantly change travel patterns.

“The final determination from that review might determine that there is a different mode that should be reviewed or that maybe there’s a no-action alternative. So really, everything’s still on the table,” he said.

Any construction work will wait for an environmental impact statement to be completed. A draft is due out next year with a final document the following year. But the Federal Highway Administration, a partner in the project, said the schedule is being revised.

Further funding would also be required. The legislature would need to approve the use of those federal transportation dollars.

A separate project to build a powerline connecting Kake to Petersburg and southern Southeast’s power grid is also under study.

The transportation priority list, known as the STIP, includes two other projects in the general area. One would shore up and resurface about 3 miles of road in or near Kake. The other would rebuild about 8 miles of highway near Whale Pass, on northeast Prince of Wales Island.