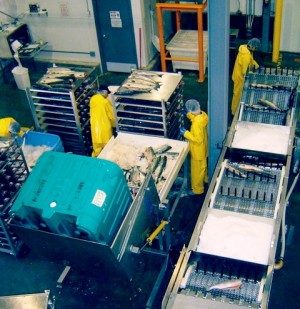 Petersburg’s nonprofit cold storage plant is serving a wider group of customers than it did when it began about 10 years ago. It’s still mostly freezing fish for big processors. But it’s also taking in groceries and sport anglers’ catches.

Seafood is frozen at Petersburg Community Cold Storage, which is in its 10th year of operation. The plant is serving different customers than it did when it was built. (Photo courtesy Petersburg Economic Development Council)

Petersburg Community Cold Storage holds up to a half-million pounds of product at a time. And during its decade of operation, that product has mostly been pink salmon, from big processors.

But that’s been changing.

“It’s kind of extended beyond just the idea of having seafood in there,” says Liz Cabrera, coordinator of the Petersburg Economic Development Council, which owns the plant.

She says it’s freezing and storing fish from more small processors, as well as local businesses.

“The restaurants and the grocery stores and even some of the remote lodges will bring things in. And even the canneries will store groceries there,” she says.

“So, if they get a large delivery or large run of fish that they can’t really handle at their plant they can bring it over and freeze it and hold it at the facility. They can also do freight consolidation so maybe they don’t have a container load yet of something they’re providing to a certain market. So they can hold product until they have a full container load,” she says.

The plant, on Petersburg’s waterfront, a half mile south of downtown, plays a somewhat different role for smaller seafood processors.

“They’ll hold frozen product there until maybe later in the season when they have time to smoke it or do some value-added processing. If they’re doing custom processing or maybe they don’t have enough room in their storage areas, they’ll bring excess over and hold it there til their customers can pick it up,” she says. 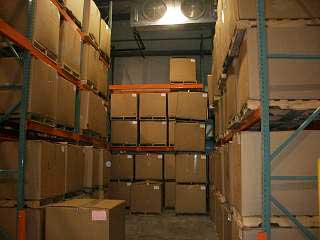 She says the economic development council has heard from some direct marketers interested in adding different types of processing to the facility.

They’re exploring options. But she says it’s hard to do more in the same amount of space when there are no plans for expansion.

Cabrera says the public cold storage is already juggling smaller customers’ needs with those of the anchor tenant.

“Sometimes we’ll prioritize floor space and … have to block in maybe some of our other users in order to be able to accommodate our larger user and we’ll try to move them out as fast as we can, so we can get to things that are stacked up behind,” she says.

Volume – and income – is better this year than last. Smaller fish runs from July of 2014 to June of 2015 brought in gross revenues of about $125,000. July, August and September of last year alone brought in 90 percent of that amount.

It’s representative of the ups and downs the facility has seen, as the salmon catch ebbs and flows and producers close or change hands.

Cabrera says overall, the operation has paid its own way.

“So we try to even it out on the good years and save the money for the year we know is going to be a down year,” she says.

Along with the customers, the species frozen and stored have changed. Pink salmon still make up much of what’s in the facility. And unlike the early days, fish aren’t just blast-frozen and put into a shipping van.

“I think we see a lot more chum and eggs that we’re processing or holding in the facility than we did initially. And then, just holding more product for additional processing later on,” she says.

Its latest addition is a couple big totes to hold ice for sport and commercial fishermen, offered at no cost.