Playing with budget blocks in Petersburg 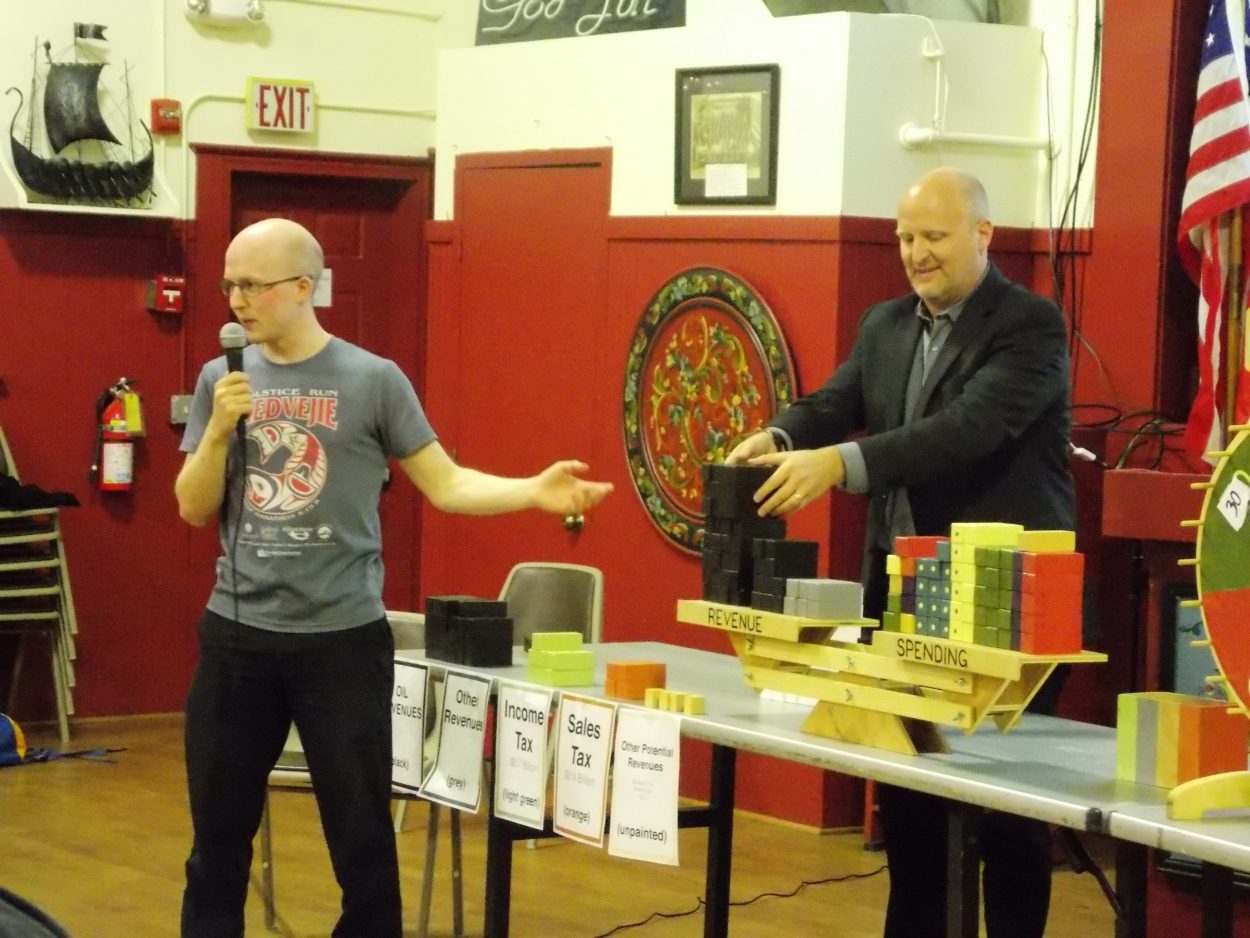 New and increased taxes, reduced state services and a smaller dividend check – those are some of the options on the table for the Alaska legislature as it tackles the state’s three and a half billion dollar budget deficit this winter in Juneau. A full house gathered at the Sons of Norway Hall in Petersburg Friday for a discussion about the state of Alaska’s finances.

It was a good turnout, an estimated 60-70 people, for a for a Friday night presentation on cuts to state jobs, services and potential taxes that could be coming down the pike. Sitka Democratic state representative Jonathan Kreiss-Tomkins and Ken Alper, director of the state’s tax division, presented the grim reality of Alaska’s fiscal situation using blocks and a large scale.

Legislators and Walker administration officials have been presenting on the state’s financial crisis for the past year. The price of oil, long Alaska’s main source of revenue, has dropped since they started the outreach. Just last week prices dipped below 30 dollars a barrel. At the same time, the state is paying out hundreds of millions of dollars worth of credits to oil companies. Last year the governor capped those credits at half a billion dollars. Kreiss-Tomkins explained that’s how much the state is bringing in from oil companies. 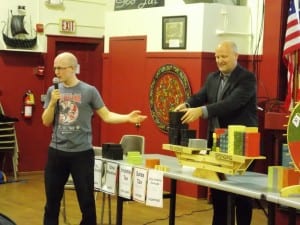 Reducing or eliminating those tax credits to oil companies is one option for helping Alaska’s finances – but it’s only a small piece of the fix needed to balance the budget. As it is, the state is spending three and a half billion dollars in savings.

“The fiscal year that we’re in right now, the budget cycle that we’re in right now in terms of government services, ferries, etc, education, all of that money is coming from this side of revenue,” Kreiss-Tomkins said pointing to blocks that represented the state’s savings. “So a lot of the money that’s keeping schools running, keeping ferries running is savings. And the significance of that is once we use those savings, they are gone, they’re gone forever.”

Kreiss-Tomkins and Alper explained that the state had a little more than two year’s worth of savings to cover the current deficit.

The governor is proposing 500 million in new or increased taxes in the next year, along with 100 million in further cuts to state spending that will mean reductions in state services and fewer state employees. Since 2014, the state has cut spending by one billion dollars and 600 positions have been eliminated.
The governor is also proposing to change the way Permanent Fund earnings are used and dividend checks are calculated. That would mean a smaller PFD check for every Alaskan, at least in the early years, around 1000 dollars, half of the payout from this year.

Alper said up til now, earnings from the permanent fund have only been used to pay the dividend check and inflation proofing. “But for the first time we’re starting to see serious conversation of, is there a way to spend some of this money over here and still protect the dividend and still protect the principal and then find the math, a sustainable formula that will enable us to do that and still run some semblance of a functional government,” Alper explained.

The governor and legislators are also proposing new taxes. Some proposals are for a new income tax. The governor is also proposing increases to commercial fishing, mining and cruise ship taxes, gas and alcohol taxes among others.

“So grand total we’ve got about 500 million dollars worth of tax increases that the administration is proposing for the next year, for the next budget cycle,” Alper said. “And people are saying oh it’s terrible, it’s onerous. This is kind of growing the gray blocks. In the scale of where we are, it doesn’t get us there yet, it’s only a fraction.”

Audience members asked questions about sales tax and income tax, and how those programs would work for the state. Other questions were on the possibility of spending some of the money that hasn’t been spent on various capital projects around the state. One example brought up was the 40 million dollars appropriated for a road and ferry connection between Petersburg and Kake. Alper said that money is invested waiting to be spent. “As of about a year ago, the 4-5 billion dollars of cash money that was in a previous year’s budget, the capital budget from four years ago, three years, two years ago, that hadn’t been spent yet,” he said. “So the treasury division of revenue, they invest it, they have it in whatever funds, it’s earning interest but it’s just cash lying around until someone sends a bill.”
That money can be re-appropriated.

Kreiss-Tomkins wanted to put to rest any hope for a quick fix. “There’s still a segment of Alaskans that’s hoping that at some point in the next few of years, some golden anvil is going to fall out of the sky and is going to fall out on this side of the scale and it’s going to balance. It is not going to happen, period. Even if oil shoots up to 100 dollars a barrel tomorrow, we still don’t have a balanced budget, we still have a budget deficit.”

He was also asked about the chances the legislature will pass the broad-based plan proposed by the governor. “I would like to think there is a fighting chance that a proposal like this will at least have a fighting chance,” Kreiss-Tomkins said. “But I don’t wanna say it doesn’t have a chance at all, although I know there are people that will say that. And I don’t wanna say it’s a guarantee because I definitely don’t think that’s the case.”

Kreiss-Tomkins encouraged people to contact him with ideas. The proposed changes can be done by the legislature without a constitutional amendment and a statewide vote.