The state of Alaska has suspended a state-mandated test because of ongoing problems with the computer based assessment, however some districts are continuing on with testing this week.

Students across Alaska started taking the online Alaska Measures of Progress assessment Tuesday. Testing that day was ended when a construction crew severed a fiber optic cable at the University of Kansas, where the vendor Achievement and Assessment Institute is based.
Statewide the assessment was on hold until Thursday morning. However, districts again had problems after the vendor’s system crashed several times, according to the Alaska Department of Education.

Department spokesman Eric Fry said they believed the problem was fixed Thursday but that was not the case. “It was going on and off and that’s just too disruptive to the school day,” he said. “The students have to leave class and go to a room where the computers are and they sit down to take the test and if it’s constantly being disrupted it becomes an enormous waste of time and we cant ask the teachers and the students to put up with something that starts and stops like that. So the interim commissioner Susan McCauley decided to tell districts to just suspend testing.”

McCauley told school districts they would not resume the testing until the company can guarantee their system is fully functional. 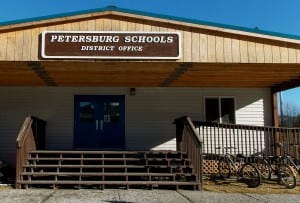 The problems impacted students in middle and high school in Petersburg this week. As of Friday, the Petersburg City School District decided to continue testing despite the decision to suspend. In an email, superintendent Erica Kludt Painter writes it is not so simple to just reschedule and there is a great deal of re-arranging of staff, students and proctors. She writes the testing was going well Friday and the district decided to keep going.
Students in lower grades are scheduled to take the test next week.

This particular statewide test is in its second year, developed for Alaska by the Kansas-based company under a 25 million dollar contract. The Alaska Measures of Progress assessment will be replaced for next year.