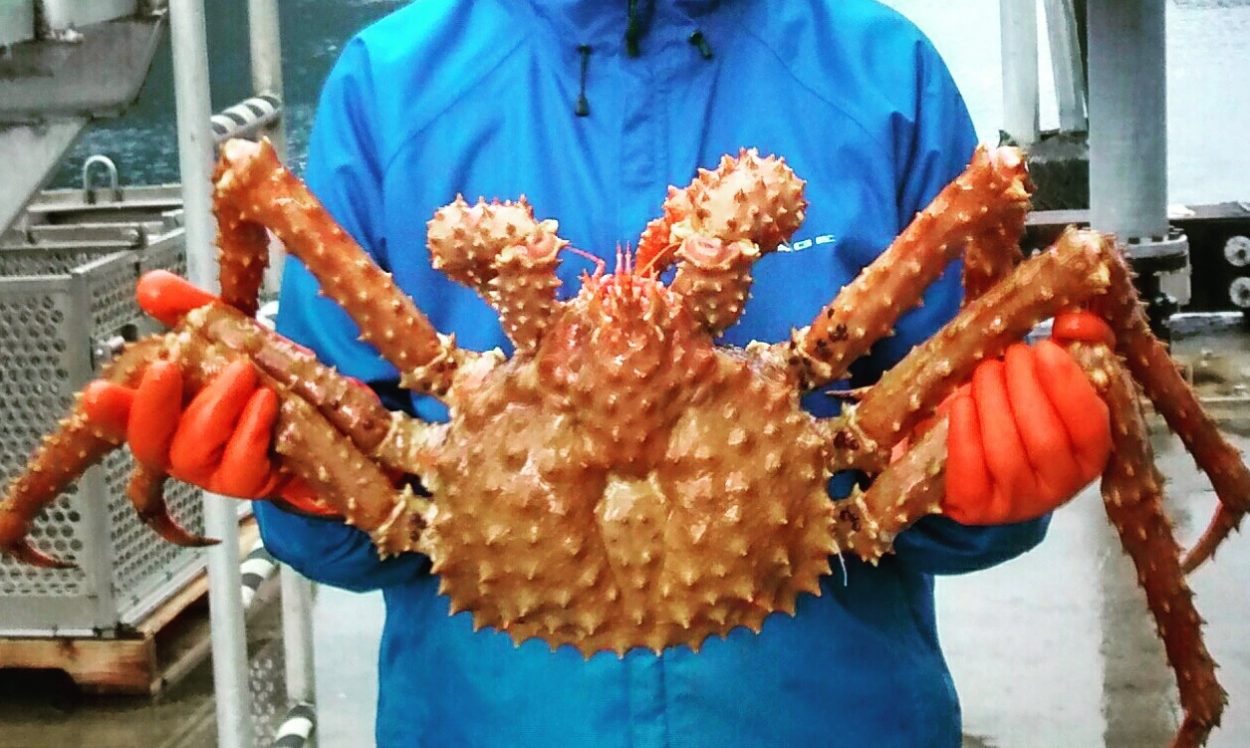 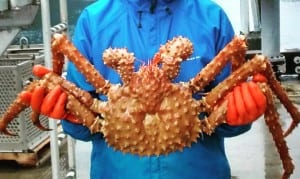 A golden king crab that was sampled at the dock in Petersburg this year. Photo/Hilary Wood

Crabbing is the first big commercial fishery of the year for many in Southeast Alaska. Preliminary harvest numbers are in for the Tanner crab fishery which turned out to be another good year. The fishery opened February 17 as did the golden king crab season. Golden king is still ongoing but it’s looking pretty poor. Angela Denning reports from KFSK in Petersburg:

First, the good news. Fishermen in Southeast brought in just over 1.3 million pounds of Tanner crab from 74 permit holders. That’s an average of over 17,500 pounds per permit holder. It’s slightly less than last year, “but it was still the second largest tanner harvest in 16 seasons with the last season being the largest,” according to Kellii Wood, a crab biologist with the Alaska Department of Fish and Game in Petersburg, which manages the fishery for Southeast. 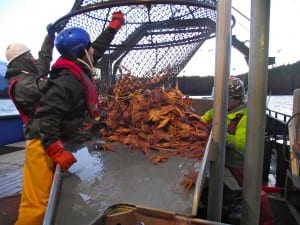 Tanner crab are dumped from a pot for sorting. Photo/ADF&G

The price for Tanner averaged $2.23 per pound, thirty cents higher than last year ($1.93) which makes the whole fishery worth just over $2.4 million dollars at the docks.

The price included bitter crab, which are infected with a parasite that makes the crab taste bad. The diseased crab made up 11 percent of the catch which is down slightly from last year. Wood says not a lot is known about the causes of bitter crab but the fishery is still considered healthy.

The core areas of Southeast were opened for seven days and the non-core areas for 12 days, one day longer than last year’s openings.

And District 14 around Glacier Bay had the third most with 12 permit holders bringing in 222,000 pounds.

District 11 around Juneau had the highest harvest, 524,000 pounds were taken by 30 permits. 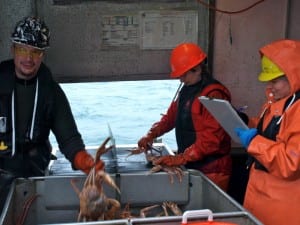 “I think it was pretty good,” Wood said.

Ok, now for golden king crab. They bring a lot more money than Tanner crab but they are proving more difficult to catch. Only 17 fishermen have reported landings so far in Southeast.

“A lot of guys that did go last season did not go this season,” Wood said. “Considering how bad it was last year and anticipating being similar this year with our reduced GHLs.”

GHL’s are the guideline harvest levels or the max amount that biologists want the fishermen to get. It’s all based on how many male crab are old enough to be harvested that season. The state uses port samples to age the crab and past and present harvests to see how things are going in the fishery. They also look at how many crab fishermen are catching per pot. Wood says that number is the lowest it’s been in the last 15 years.

“Things look not as good as they have been,” Wood said. “The stock has declined in health.”

“Those two areas were definitely areas of concern and so we felt that we needed to shut those down early and we did the same thing last year,” Wood said. “Things have definitely continued to get worse so in order to lessen the pressure on those fisheries we closed early.”

The exact cause of the golden king crab decline is not clear. As with other fisheries in Alaska more research would be helpful to managers. But with state budget cuts, that doesn’t seem likely. What biologists do know is that Southeast’s king crab population is worse off than it used to be. It was actually a strong fishery from the early 1980s to the early 90s with close to a million pounds being harvested some of those years. 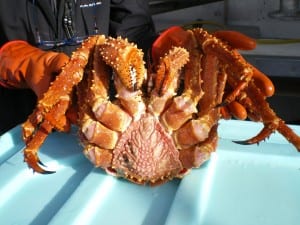 The bottom view of a golden king crab in Southeast. Photo/ADF&G

The state closed the East Central and Northern areas by emergency order after reaching about 40 percent of the harvest goal.

The price for golden king crab has also gone down the last five years. Still, it’s much more valuable than other species. This season it’s averaging about $10.50 per pound. Last year it was about $11.86 a pound. It was over $12 in 2014.

This year’s harvest goal for all of Southeast was just 155,000 pounds which is less than half of the target last year.

Some areas are still open for golden king crab but most are not even half way to their target goals.

It’s possible that these areas will also close early but for right now they remain open.

And for now, biologists will continue to use their best guesses as to why the numbers are dropping.

“I think there’s definitely some cyclical stuff going on. There’s also we’ve got prey issues,” Wood said. “We’ve had a lot of reports of juveniles in the belly’s of pacific cod, halibut, and we know that their levels are up. So, that could play into it.”

Some fishermen switched to golden king crab once the Tanner fishery closed. Other fishermen have already moved on to other fisheries.