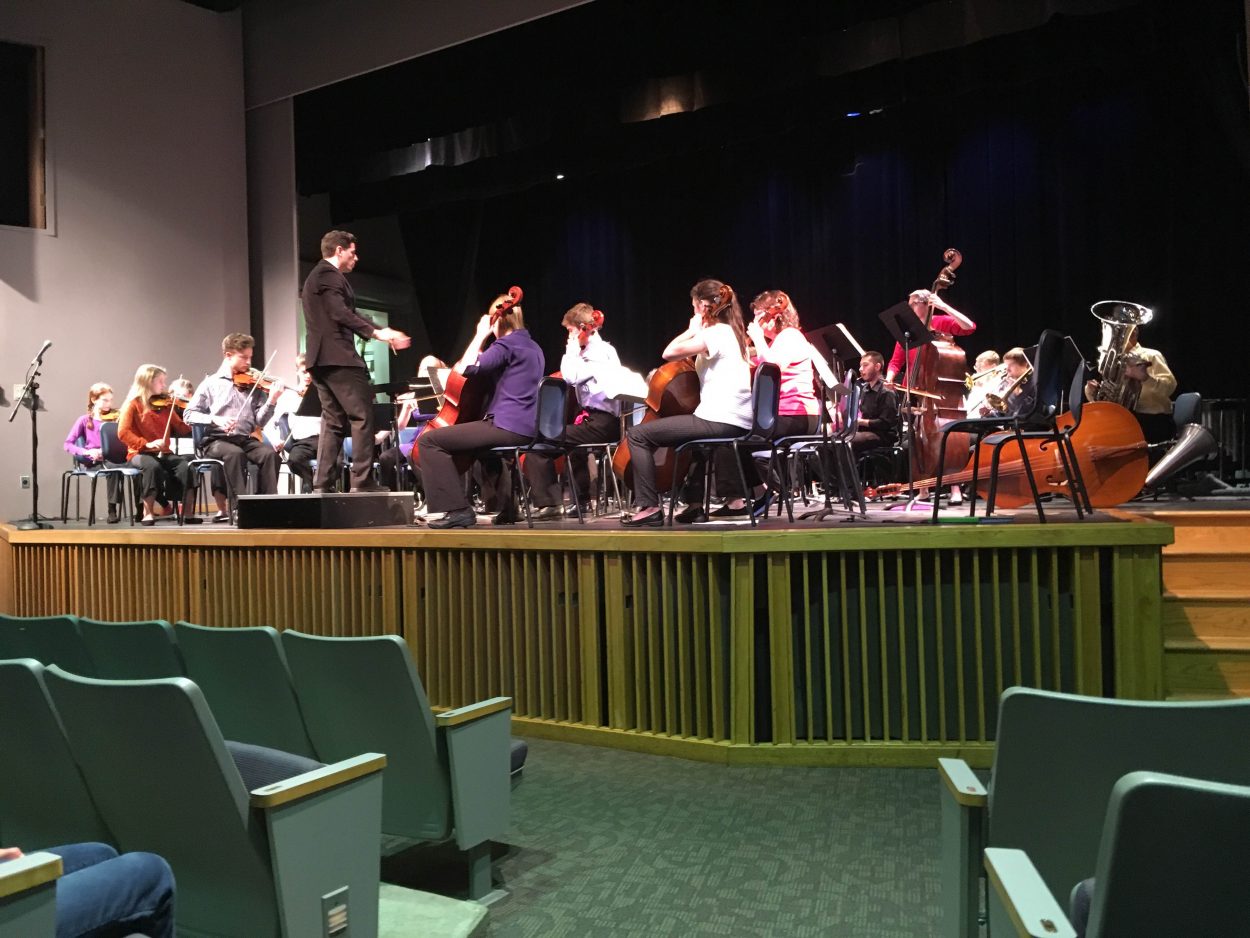 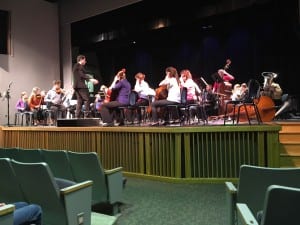 The Juneau Student Symphony, with members of the Juneau Symphony, performs in the Wright Auditorium, directed by Troy Quinn. (photo/Abbey Collins)

Petersburg’s Wright Auditorium filled with the music of Antonio Vivaldi, Aaron Copland, Andrew Lloyd Webber and much more last weekend when over fifty student and professional musicians of all ages came to town from Juneau. Abbey Collins reports.

Students assembled at the Wright Auditorium and played “Our Town,” “Rondeau,” and even the Game of Thrones theme song.

According to Quinn there’s a wide range of players in group.

“I think our youngest is probably 13 and we have adult beginners in their 60s and 70s actually in the student symphony, says Quinn. “So there’re quite a range of not only age but also level and ability. And it’s really a reflection of the diverse culture here in Juneau and also our mission to reach out to anybody no matter your age or ability level to enjoy music.”

Take Reece Bleakley. She’s 14-years-old and plays the saxophone, piano, and, in the Juneau Student Symphony, the flute is her instrument. She estimates she’s been playing since about the second grade. A few of those years spent in the student symphony.

“Since sixth grade, so about three years now,” says Bleakley.

Bleakley was excited to perform in Petersburg. She says the Andrew Lloyd Webber medley is one of her favorites to play.

“It’s one of the most challenging ones and I think I just like the challenge with,” she says.

She says playing in the symphony is a lot of fun.

“I really like playing with them because it gives you a challenge and you also get to learn a lot while being with a bunch of people that are in the same level as you,” says Bleakley.

Members of the Juneau Symphony were onstage too, playing alongside the students.

Quinn says the Juneau Student Symphony is a place where people can take up and instrument and learn.

“It’s really a wonderful opportunity for anybody to pick up an instrument, it’s never too late,” he says. 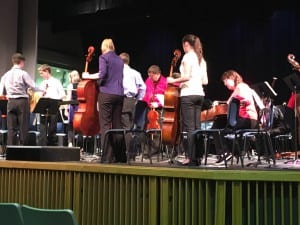 “Just being a part of any orchestra kind of teaches you as you go along. I learned the technique part of my instrument with private lessons but you learn about the musical notation and you just get better as you play, says Hermann.”

The string ensembles Aurora Strings and Ursa Minor played in Petersburg this weekend, too. Directed by Guohua Xia. Among other songs, they played a rendition of Aaron Copland’s Hoe-Down.

Quinn says jumping in to conduct the Juneau Student Symphony for this performance in Petersburg has been a little hectic.

“Only because this week I come into town to work with the symphony – the Juneau Symphony has a concert next week,” says Quinn. “And so simultaneously I’m rehearsing with the student symphony.”

The music isn’t new to the students. Quinn says they’ve been playing these pieces throughout the year.

“They’ve lived with this for a while but as far as the music making process to bring this to Petersburg and my involvement, this is all new as of this week,” says Quinn. “So it’s been a fun and very engaging process to try and put it together in a week.”

Though Quinn doesn’t normally direct the student symphony, he says he doesn’t treat it any differently than working with a professional level orchestra.

“I think the expectation is still the same. The difference of course is that you have people of varying abilities,” he says. “What I’ve found is that the student symphony is very engaged and they’re like a sponge when we’re trying to correct things. It almost can sometimes go a little bit faster because students are wanting to naturally get better and do well for themselves and for the directors.”

The biggest challenge, he says, is getting all of the students in the same room, amid all their other activities.

“Once that’s accomplished and we’re all on the same page there to make music, anything’s possible,” Quinn says.

Anything, like Ralph Ford’s Ashford Celebration that students played in the Wright Auditorium.

Petersburg musicians Skipper Ericksen, Kayleigh Eddy and Alexandra Bless performed with the Juneau groups. For pictures of the performance, visit our website KFSK.org or find us on Facebook.