A man who’s headed up two different churches here in Petersburg, flown float planes and done the midnight shift as a local cop has moved out of town this summer. Pastor Mike Schwarte left the Petersburg Lutheran Church and moving with his family to be near Auburn University in Alabama. The 54-year-old Schwarte was a Catholic priest for five years covering churches in Wrangell, Petersburg and Kake and flying a float plane back and forth between the towns. He also worked as a float plane pilot and wore a badge for the Petersburg Police Department. 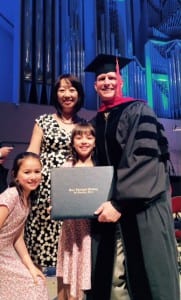 From left to right, Joy, Ying, Olivia and Mike Schwarte at his graduation from Knox Theological Seminary, May 13th, 2016. Schwarte earned his Doctorate in Ministry with a concentration in teaching and preaching. (Photo courtesy of Mike Schwarte)

Joe Viechnicki sat down with Schwarte to look back on his time wearing a number of different hats in a small town.

Mike Schwarte and his family left town July 2nd for Auburn, Alabama. There’s a longer version of this interview on our website kfsk.org