Scientists look at dynamics of melting at Southeast Alaska glacier

Scientists have discovered huge underwater ice caves in glaciers that flow into the ocean, depositing plumes of fresh rain and melt water into glacial fjords. A multi-year study of one glacier near Petersburg is focusing on that interaction between the ice, fresh water and ocean water and what that may reveal about melting glaciers around the globe.

LeConte Glacier near Petersburg is the southernmost tidewater glacier in the northern hemisphere – tidewater meaning it calves giant ice blocks directly into the ocean. It’s that interaction between the ice mass and the warmer ocean water that is the focus of the latest research.
Roman Motyka is a research professor emeritus with the University of Alaska’s Geophysical Institute. He is based in Juneau and is also affiliated with University of Alaska Southeast. He pointed to a 2003 paper he worked on that looked at how the ocean impacts a tidewater glacier.

“Up until then the effects of oceans on tidewater glaciers really hadn’t been appreciated,” Motyka said. “And through our work there we discovered that submarine melting at least seasonally was a very significant factor in controlling a glacier’s position and a significant factor in a glacier’s overall mass balance. That means its budget. That means how much ice is lost and how much ice has gained.”

In 2015, his team, comprised of scientists from multiple universities and different disciplines, landed funding from the National Science Foundation for the research. The work started this year with scientists out setting buoys in the bay and installations on the glacier in April. Then in August, Motyka says 15-20 people spent 10 days taking measurements in the fjord and right along the face of the calving glacier. Scientists are focusing on rain and melt water that is discharged from the ice into the ocean.

He explained that rain enters the glacier and forms rivers inside the ice, combining with melt water and flowing out of the ice into the ocean below the surface. That cold fresh water is less dense than the warmer ocean water and it shoots to the surface, sending the relatively warmer salt water down to the base of the ice mass.

“So all of this subglacial discharge causes a buoyant plume to rise along the face of the glacier,” Motyka said. “It draws in the warm salt water, causes melting. That undercuts the glacier which enhances calving. So the upper part of it, no longer supported, it calves off and causes the glacier to start retreating back.”

The glacier face is a dynamic and dangerous place; blocks of ice the size of city buildings are constantly falling into the water or shooting up from underneath the surface, sending huge waves out into the bay. To get into that area safely, researchers are using remotely operated motorized kayaks, designed by one of the project’s collaborators, Jonathan Nash of Oregon State University. Those kayaks are able to gather data on ocean water conditions and the position of the ice.

The scientists are also getting underwater images of the ice mass. Motyka said two other researchers on the project, Dan Duncan from University of Texas and David Sutherland from the University of Oregon, masterminded the use of the what’s called a multi-beam survey, pointing it toward the glacier’s face under water.

“When we imaged it you could actually see the grottos or caverns or caves where the sub-glacial discharge was coming out from,” he explained. “And these were like 50 to 100 meters wide and that high. So that much water was coming out and carving up these caves by bringing in this warmer saltier water.”

The scientists are trying to understand the exact dynamics at the glacier’s face. That means how the upwelling fresh water impacts the ice and calving as well as what the heat transfer looks like from cold ice mass to relatively warmer ocean water. Motyka said the study will produce direct measurements of the melt rate at the glacier’s face. That will help with predictions about when this ice mass will retreat further. The information can also be applied to other tidewater glaciers and how they’re expected to continue melting. It could be used to predict rising ocean levels.

“What we are concerned about is increased atmosphere warming,” Motyka said. “That means we’re gonna increase more melt water into the system, maybe increase precipitation, and with ocean warming, we know the ocean’s been warming also that that’s going to increase this process and destabilize these glaciers and we’ve seen that happen now in Greenland with a couple of glaciers and it may be again happening here at LeConte we don’t know we’ll see at the course of our study.”

Motyka explained that LeConte is a good subject to study because it is accessible throughout the year, unlike glaciers in Greenland or Antarctica. The position of the glacier’s face has remained in relatively the same spot for the past decade and a half. That’s likely because it’s in a narrower and shallower part of the fjord, where it’s not losing as much ice. But Motyka expects that could change. 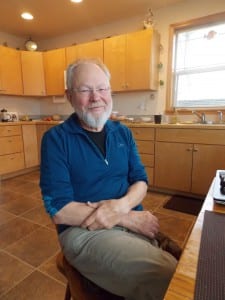 Roman Motyka was in Petersburg for the Rainforest Festival in September and gave a presentation on LeConte Glacier.

“The fear is that once it gets past that constriction it really opens up behind it,” he said. “And it’s much deeper back there. We know that from measurements of ice thickness that we made back there that it could go catastrophically. It’ll find itself in deeper water, become more buoyant and the calving process will be a runaway process.”

LeConte retreated more than a mile during the mid 1990s. Motyka is hoping that a similar retreat does not happen again during this research. Scientists will return to the bay three times next year, one each in the spring, summer and fall. After that it will be time to sift through all the data and publish the results.