Transboundary mine developer shutting down 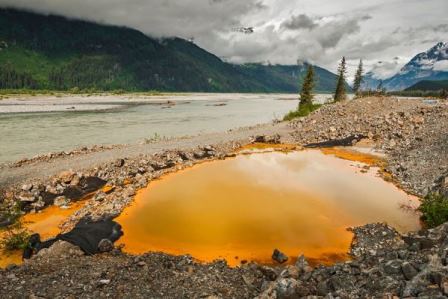 Acid drainage from the Tulsequah Chief Mine discolors a leaking containment pond next to the Tulsequah River in British Columbia in 2013. (Photo courtesy Chris Miller/Trout Unlimited)

The company trying to reopen the controversial Tulsequah Chief Mine, upstream from Juneau, is being taken over by an investor that’s owed millions of dollars.

It means polluted water could continue to drain from mine tunnels into a Taku River tributary. But there are disagreements over what, if any, damage is being done.

Toronto-based Chieftain Metals has been trying to reopen the historic Tulsequah Chief Mine for about six years.

The zinc, copper and gold mine is in northwest British Columbia, about 20 miles from the Alaska border. It’s next to a waterway that drains into the Taku River, near the capital city.

Biologists call it one of Southeast Alaska’s largest salmon-producing watersheds.

But a major investor wants its debt repaid.

Chieftain Metals doesn’t have enough money to do it. So, it’s going into receivership, which can lead to bankruptcy.

“What it means for the Taku watershed is the pollution is likely to continue.” said Chris Zimmer, Alaska campaign director for Rivers Without Borders. It’s one of a number of groups critical of mines and exploration projects along British Columbia rivers that flow into Alaska. 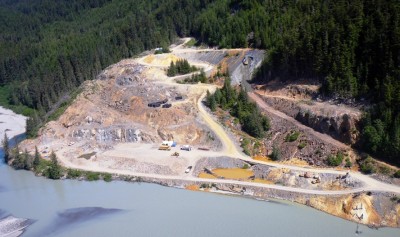 The Tulsequah Chief Mine is on the banks of its namesake river, which flows into the Taku River, which enters an ocean inlet near Juneau. (Photo by Joe Hitselberger/ADF&G)

“When this mine was abandoned in 1957, no reclamation was done. And so for almost 60 years, we’ve had acid mine drainage, which is very toxic to aquatic critters, flowing right into the Taku, out of this mine, really unabated, without any reasonable attempt at cleanup that actually worked,” he said.

British Columbia regulators required Chieftain to reduce that pollution when it was solvent. The company built a plant, but said it was too expensive to operate without the mine opening and generating revenue.

Whether that acidic water and dissolved metals are a serious threat to salmon is disputed.

A number of environmental, tribal, municipal and fishing groups say it is. They point to a study estimating 15 tons of metals leech into the Taku watershed a year.

But a 2014 report released by mine developers said it’s not enough to cause problems. A state report issued two years earlier said concentrations in fish tissue are below federal safety requirements.

That study’s been expanded and redone.

“We received more money from the legislature to continue to investigate the metal concentrations in resident fish tissues at the mine and then above the mine and below the mine,” said Jackie Timothy, Southeast regional supervisor for the state Department of Fish and Game’s Habitat Division.

She said the new study will be published within the next month.

Mines Minister Bill Bennett said Chieftain Metals was supposed to further evaluate the impacts of mine discharges. Since it’s no longer solvent, he says the government will take over the work.

But that doesn’t mean B.C. will treat the water or stop its flow into the river. Bennett says such actions will depend on the results of its research.

The Tulsequah Chief Mine is northeast of Juneau, just across the border in British Columbia. (Map by Chieftain Metals)

“If B.C. and its mining companies can’t operate or clean up the Tulsequah Chief in a way that doesn’t threaten the Taku, how can we have any confidence that much bigger mines like KSM, like Red Chris in the Unuk and in the Stikine can be operated as well without threatening our water quality and fisheries downstream?” he asked.

Chieftain Metals officials did not respond to phone and email requests for comment.

But a press release posted on its website confirms the company is in receivership, which means a representative of its largest investor is taking over its assets.

The release also said the majority of its board of directors has resigned.

Chieftain ran into financial trouble earlier this year after the Toronto-based investment company West Face Capital noted it had not paid more than $4 million in Canadian dollars in interest and fees.

West Face in August demanded repayment of its full $26-plus million investment. Chieftain does not have that much on hand, which led to its assets going into receivership.