Forest plan has some changes for central Southeast Alaska 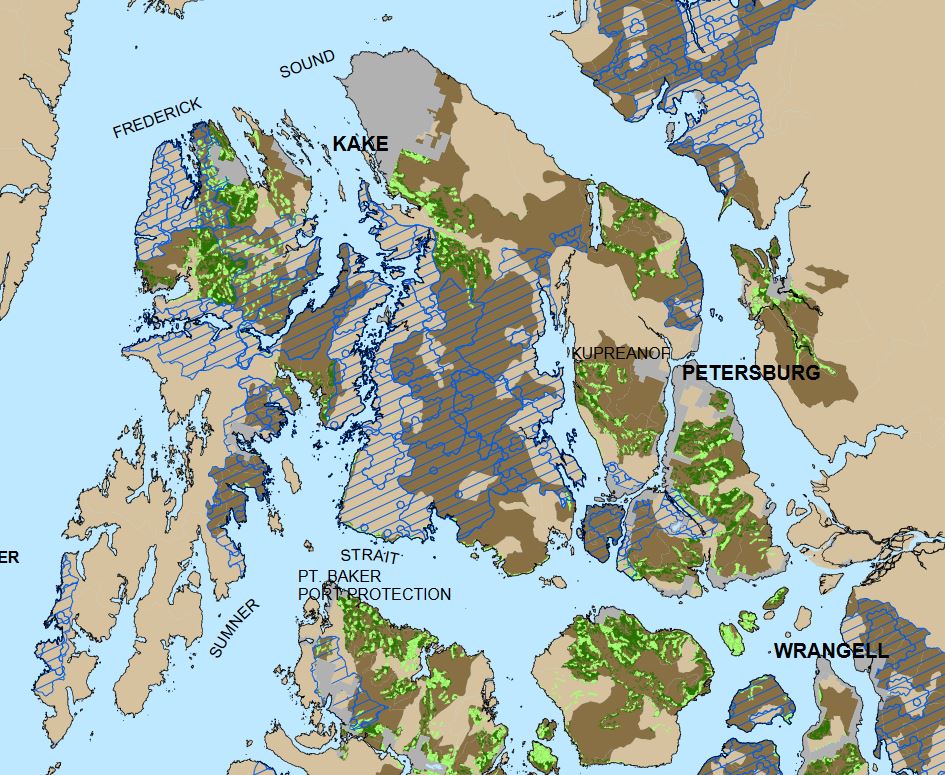 Streams and watersheds in the Petersburg area are among those placed off-limits to old growth logging in an amendment to the Tongass Land and Resource Management Plan released in December. However, some of those same streams may be sources for second-growth timber cutting. The plan amendment also makes some other changes for national forest land in the area.

The latest amendment to the forest plan does not make sweeping changes to the Tongass’ system of land use designations, which essentially spells out what parts of the forest can be used for what. Instead the document focuses on an accelerated transition to logging young-growth trees, away from old and larger timber. The plan adopts recommendations of the Tongass Advisory Committee, made up of representatives from Southeast’s timber industry, tribal organizations and conservation groups. One of that group’s recommendations was an end to logging old growth trees around certain salmon streams and watersheds.

“To see this kind of protection given to wild salmon habitat is significant in my mind because we know that salmon is really important both culturally and economically in Southeast Alaska,” said Julianne Thompson, the Forest Service’s watershed program manager for the Tongass. “So to see that kind of protection given through the forest plan, it’s good for the Tongass forest and I think it’s good for Southeast Alaska.”

Those important salmon watersheds include a long list of streams named the Tongass 77 by Trout Unlimited. It also includes additional waterways called conservation priority areas by The Nature Conservancy and Audubon Alaska. And while they’re called watersheds, Thompson explained some are bays or stretches of coastline.

“Because we’re in this coastal, island-based landscape, a lot of these are not classically you know single river watersheds, they’re areas around bays like around Security Bay, around Rocky Pass, around Big John Bay,” Thompson said. “So they may not necessarily come to mind as people say oh yeah that’s a huge important salmon producing stream but when you look at the accumulation of streams that estuary and read what Trout Unlimited has put together on it, it does make sense.” 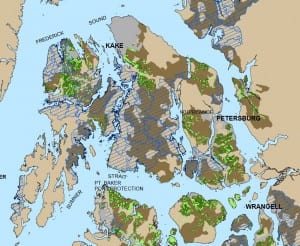 Timber production suitable lands are in green, dark green for old growth and light green for young growth, while conservation areas are shaded in blue.

That list includes Big John Bay, Castle River, Totem Bay and Rocky Pass on Kupreanof along with Security Bay, Port Camden and Kadake Creek on Kuiu and Farragut Bay, Port Houghton and the Sandborn Canal on the mainland.

The plan amendment also adopts another recommendation of the Tongass Advisory Committee. That will allow for greater flexibility for harvesting second growth timber in some of those same watersheds are now off limits to old growth cutting.

Susan Howle, the agency’s project manager for the forest plan amendment, explained there are 16 areas identified for young growth timber production. “So if you look at the forest plan in the young growth section it identifies several T77 (Tongass 77) watersheds that they wanted us to monitor over 5 and 10 years just to make sure that if we harvest in these areas we wanna also consider what are the impacts to fish and wildlife habitat,” Howle said. Three of those young growth watersheds are on the Petersburg Ranger District. Two are on north Kuiu, Security Bay and Kadake Creek and one is at Irish Lakes on western Kupreanof Island.

In addition, Howle explained the new forest plan opens up other possibilities for timber harvest. “There’s some trade-offs there. The trade-off is it’s going to be protecting old growth forests but the trade-off is because we don’t have a lot of young growth that’s ready to be harvested, we have to look at other areas on the forest that our previous plan may not have allowed for in other words certain areas may have been not suited for timber production.”

That means that some areas designated as old growth habitat could be a source of second growth, along with beach fringe or creeks that have already been logged.

The plan amendment does not change most of the Land Use Designations or LUDs on the Tongass. There are a few exceptions, including lands impacted by the Sealaska Land Entitlement finalized in 2014. That law established eight areas of the forest as LUD II management areas, off limits to commercial logging. Two of those areas are on the Petersburg Ranger District, at Kushneahin Creek on southwest Kuprenaof Island and the Bay of Pillars on western Kuiu Island.

The Sealaska bill also conveyed about 70,000 acres of national forest land to the Native corporation, most of it on or around Prince of Wales Island along with parcels near the north end of Kuiu.

Lands that are suitable for old growth and young growth logging and not in a conservation area are on northern Kuiu, on Kupreanof Island near Kake, Portage Bay and the Lindenberg Penninsula. Other timber suitable lands are in Thomas Bay, Mitkof and Zarembo islands along with northern Prince of Wales.

Howle said another new offering with this forest plan is a commitment by the Forest Service to publish an annual five year plan of timber sales. “So this is something we are planning to have on our website, keep it up to date and it’ll be posted no later than December 31st of each year.”

Sales that are under consideration or could be offered in the next five years around Petersburg are two on Mitkof Island, two on Kuiu and one on Zarembo.