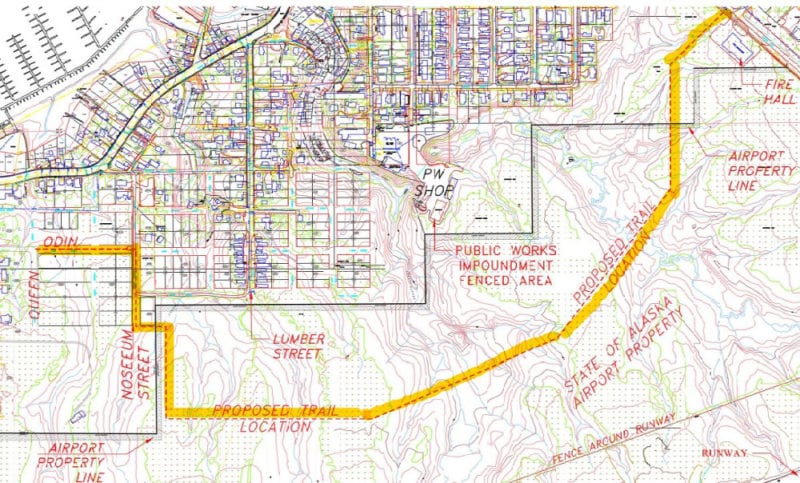 Petersburg’s planning and zoning commission Tuesday recommended a new route for a trail that could stretch from Severson subdivision to Haugen Drive near the new fire hall. Testimony came in for and against the proposed walking path and the commission wanted to see some parking space at either end of the route.

The proposed trail would connect the residential neighborhood with the Hammer and Wikan shopping center and post office and offer a walking route through the muskeg. It takes a different route on airport land than the trail proposed last year by the Petersburg Indian Association. That route ran into opposition from neighbors and failed to get a recommendation from the planning commission.

“The original route was all on borough property and they had accepted that but this new route goes through airport property,” Harai explained. “We have a tribal liaison that works with the state of Alaska and we will be pursuing, if the borough approves this, we will be pursuing an easement or right of way long-standing.”

This proposed trail and others in the works are part of the tribe’s long-term transportation plan. Harai said the path has not yet been designed and expected it would be a combination of gravel, boardwalk and bridges. She noted that the PIA has maintenance agreements to keep up other trails in town. As an example she said the tribe would be adding six inches of gravel on top of the existing Hungry Point trail probably in the fall. The tribe’s trail crew has restarted work on the wooden boardwalk extension of that trail that connects to 14th street and that extension is nearly finished.

The new proposed trail would connect residential neighborhoods on Noseum and Lumber streets with the Severson subdivision through an undeveloped portion of Odin Street. At the other end it would connect with Haugen Drive on the town side of the fire hall. But it would avoid a direct connection to Lumber Street or the neighborhoods near the borough’s public works building.

Ron Buschmann owns property on the Noseum Street end of the trail and is offering to grant an easement on his property for that part of the pathway. “I found something really interesting and that is that houses now real estate is rated for value by walkability, by how close you are to places to walk, to trails, to sidewalks and that sort of thing,” Buschmann told the commission.

Another home owner in the area, Rick Braun gathered some signatures in support among his Tango Street neighbors. “I think everybody in the Severson subdivision, everybody on the other end of the trail is gonna love using the trail both to walk to the harbor or we’ll go to the grocery store and the post office instead of taking the car.”

The reviews were not all positive. The borough’s fire and EMS director Sandy Dixson had concerns with parking with the trail ending at the new fire hall. “We already run into the issue of parking for our volunteers when there’s an emergency and I realize it’s very attractive because the parking lot is empty most of the time or only or two vehicles there,” Dixson said. “However in an emergency the volunteers need a place to park and they can’t really park on the highway.”

The borough’s building official Joe Bertagnoli read two other letters with questions about the trail. One was from Noseum homeowners Alice and Thomas Cumps who were worried about increased vehicle and foot traffic, among other concerns.

“We already have to deal with litter strewn alongside the street and at the end of Noseum,” the letter read. “Not only do we pick up litter waste, beer cans and bottles but we have also had to pick up dog poop which has just been left near our driveway or on our property nearby. So we concerned that an increase in foot traffic may bring more unwanted garbage into our area.”

Other letters were submitted both for and against the proposal. Some neighbors were concerned that the walking path would be another spot for illegal drug use.

Other commissioners agreed that parking should be provided but liked the new route. Dave Kensinger was not swayed by concerns over drug use on the trail. “Just because you build a road somewhere or a trail somewhere and it’s not used for the purposes, if it’s used for illegal purposes then that is a law enforcement issue,” Kensinger said. “I don’t think you can condemn a road or a trail just because it’s used for illegal activities.”

The commission approved an amended recommendation to include some kind of parking space on either end of the trail and then voted 5-1 to recommend the trail. Byrer was the only vote against it. The recommendation goes on to the borough assembly for consideration.