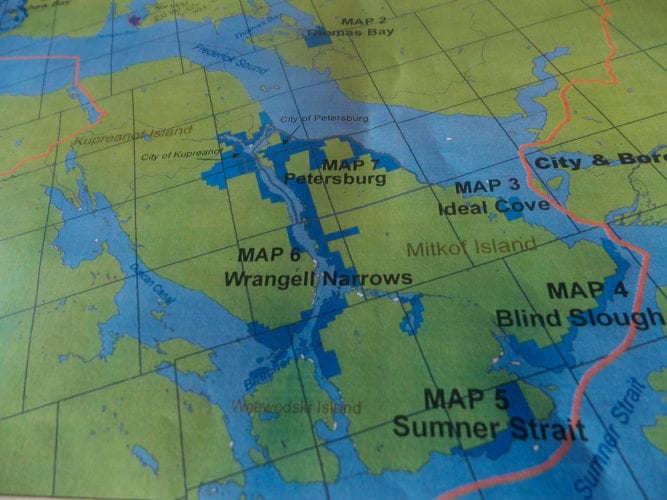 The lands in blue could be transferred to the Petersburg borough if the state legislature approves Senate bill 28 this spring.

Members of Alaska’s House finance committee this month had some questions about a bill that would increase the amount of state land granted to the borough of Petersburg. The bill has advanced in the legislature this year despite concerns over the size of the request from the municipality.

State law allows a new municipality to take 10 percent of the available state land within its boundaries, and specifically state land that isn’t already set aside for another use. Petersburg is asking for an increase in that amount. Under a bill introduced this year Petersburg would be granted 95 percent of the available state land in the borough that hasn’t been designated for another use. The bill had a hearing in the House finance committee this month.

North Pole Republican representative Tammie Wilson wondered about the amount of the proposed land grant. “Is this following the model that other boroughs had that they were given so many acres that they were supposed to then basically privatize for people to have homes and businesses on or is this just, it kinda fits what you need in that area and that why this amount of acreage?” Wilson asked.

Petersburg is seeking 14,666 acres, roughly a ten-fold increase in the amount the municipality is entitled to. The borough is noting that most of the other boroughs have also increased their land grants with legislative approval.

Bill sponsor Sitka republican Senator Bert Stedman defended the request. “This would align the Petersburg borough more along the lines of other boroughs throughout the state in size and area,” Stedman said. “Most of the land, we gotta remember, in Southeast, like 92 percent of it’s the Tongass, federal forest. So although the borough size might be large there’s very little private property and state property within the Tongass.”

The amount of federal land in the Petersburg borough is over 96 percent. That land is exempt from the borough’s property tax. Borough officials are making the case for the larger state land grant saying there’s little land left to that could generate tax revenue. The borough is hoping to sell off some of the land and develop some of it for rock pits or other uses.

Legislators pressed bill supporters about how Petersburg came up with the 14,666 acre request. The borough’s community and economic development director Liz Cabrera said that’s from an average of other land grants. “I took all of the acreage of all of the existing boroughs and then what they received in their selection process and just averaged it out, so that we would be in line with all the other borough,” Cabrera explained. “So it basically would be put us average, across the state.”

Other land grants in the state range from the Bristol Bay borough’s 2,900 acres to over 355,000 acres to the Mat-Su borough. If approved, Petersburg’s allocation would be larger than the 3,167 acres granted to Haines and the 9,006 acres granted to Wrangell.

Rep Scott Kawasaki asked if the selected land had to be near other parcels of selected land or if the municipality could select the best available remaining state lands in the borough regardless of location.

Marty Parsons, deputy director of the state’s Division of Mining Land and Water said the selected lands did not need to be next to each other.

“In fact that is probably one of the great benefits of the way this program is set up is the boroughs can cherry pick, take the most valuable land for economic development and select that for their entitlement.”

The state lands that could be selected are on the mainland in Thomas Bay and near Cape Fanshaw, along with parcels along the shoreline of Mitkof and Kupreanof islands.

The bill was held in House finance for another hearing. The next hearing on Senate bill 28 is scheduled for May 12 at 1:30 p.m. in House finance. It has already passed the Senate.