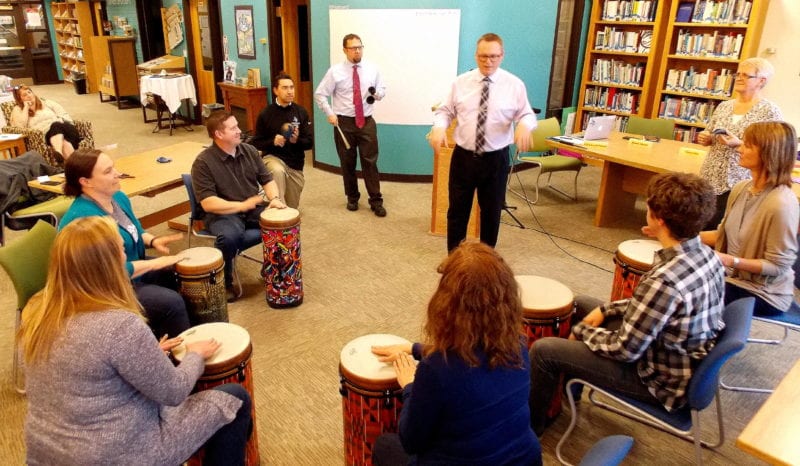 A new drumming program for students has been going on at Petersburg’s elementary school this year. It’s called World Music Drumming and as Angela Denning reports, it’s not only teaching students how to keep a rhythm but also how to communicate better.

The sound of the fourth grade class practicing their drumming fills the school board meeting. A recorded video of it is projected onto a screen at the front of the room.

Matt Lenhard is explaining to board members what’s going on, which students are playing what instruments. He’s been the music teacher for the school district for about 20 years.

Some school board members nod their head in time. Others tap their feet. A few more videos are shown including the fifth grade class practicing a song from Africa.

The school has had the drums for many years, ever since the Kodiak Island Drummers visited Petersburg. The visiting group had wanted some drums to be here already, so the school’s Partners In Education or P.I.E. group purchased them. Since then the drums had only been used in class occasionally until this year.

Last summer, Lenhard took at week-long class in Washington on how to teach drumming to students. More drums were purchased through the school’s budget and a grant from P.I.E. The drumming program then started up this fall.

Lenhard says it’s a very involved class with a lot of participation. A big theme in the curriculum is about communication and understanding. 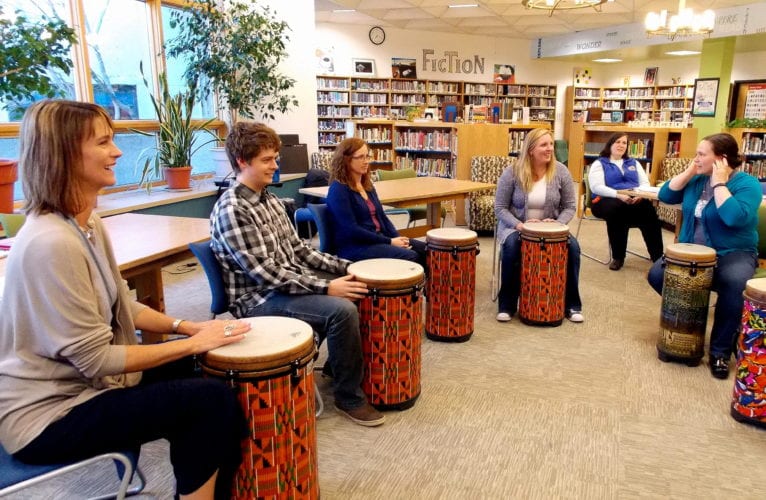 School board official and board members participate in a drum lesson at the school board meeting, May 9. (left-right) Superintendent, Erica Kludt-Painter, School board student representative, Casey Evens, Board member, Sarah Holmgrain, and Board member, Mara Lutomski. Public Health Nurse, Erin Michaels looks on from the back. Photo/Angela Denning

“Understanding of different cultures, the tradition we’re using comes from West Africa primarily and also Latin America,” Lenhard said. “It teaches kids how to listen to others. Not only musically but ideally listen to others, what someone has to contribute.”

Lenhard asks Irene Littleton, the district’s Administrative Assistant, to keep the timeline. That’s the main beat that leads the others. Littleton has experience having played drums in high school.

There are high, medium and low drum beats. Everyone is taught their own rhythm to play. Then the group puts it all together. 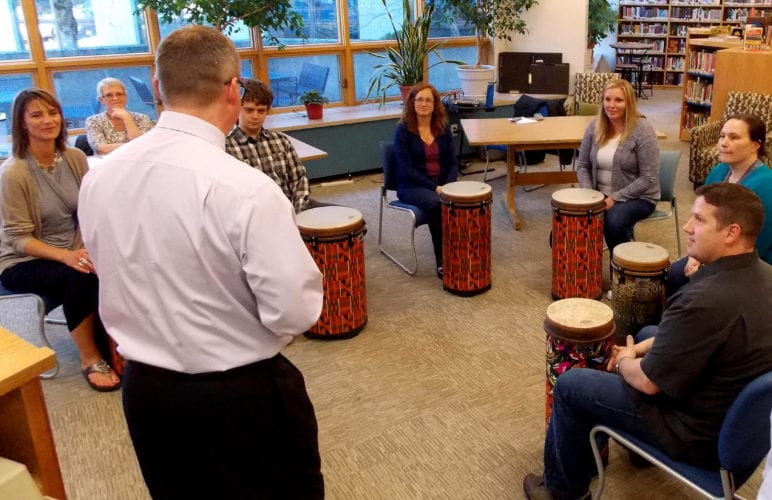 Music teacher, Matt Lenhard, prepares school board members and district officials for a drumming lesson during the school board meeting, May 9. Photo/Angela Denning

They play the first ensemble that both fourth and fifth grade classes learn in the program. It has a four-four time beat.

Lenhard says the program reaches some students who have trouble engaging in school.

“I’ve seen some kids who I know have had some difficulty with reading and just general being in school. They weren’t very good at that either but they just gradually kind of buy in, engage, and those skills improved. And their behavior improved too,” Lenhard said. “I know it’s not a miracle cure but I think when you have everyone involved like that and engaged, [saying] ‘I gotta get this right!’ Things just start lining up and it makes your brain happy.”

The students will be performing the drumming songs for their peers on Wednesday, May 31, at the school’s end of the year assembly.