Muskeg is a unique environment among Petersburg’s mountainous landscape 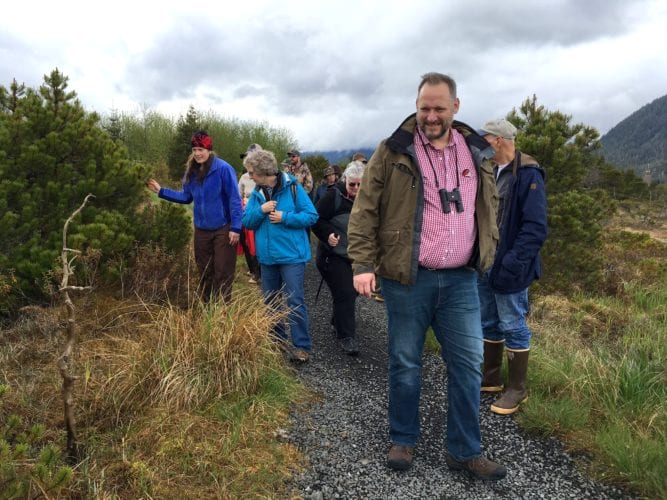 One thing that makes the Petersburg landscape special is the muskeg. While most of the surrounding country is covered in thick forested mountains, the muskeg is flat and boggy. As Angela Denning reports, visitors to the recent Little Norway Festival had the chance to learn all about this unique area on a muskeg walk with botanist, Joni Johnson.
About 25 people are gathered near Petersburg’s ball fields to learn about muskeg. Muskeg has a peat surface and looks similar to tundra but instead of permafrost below, it’s a muddy soup. It’s a unique environment to a temperate rain forest with cool temperatures and high precipitation.

Joni Johnson, a botanist with the U.S. Forest Service, leads us to the winter skating pond nearby. It’s thawed now and looks like a lake of mud. Johnson says that’s because the top layer of muskeg peat has been peeled back and dumped along the edges of the pond.

“You can look at the debris pile and that’s why I wanted us to come up here was just so you could kind of see all those layers that he peeled off,” Johnson said. “It’s all peat, it’s all organic.

Johnson calls the surface of the muskeg a shallow living matter layer that includes a lot of sphagnum mosses and lichen.

“Peel back more layers and you’d still have muck. And, I don’t know, I think in this area it’s about 15 feet deep,” she said. 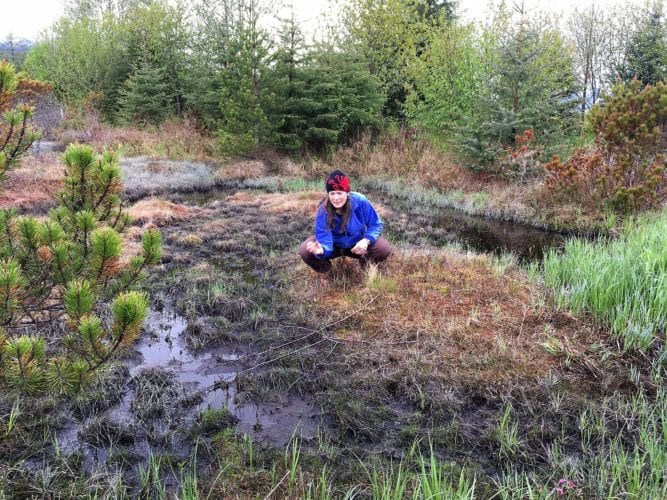 Living among the muck is one of the wonders of the muskeg–short trees called shore pine.

Johnson pulls a few round cross sections from a cardboard box she’s been carrying. The diameter of the tree trunks is not very big. Each one you can fit in your hand.

“How old are these?” someone asked about a living tree nearby.

It’s not easy for vegetation to grow in the muskeg because it’s a nutrient poor environment. Whatever is growing here is a hardy survivor. The shore pine is one of them.

“These trees grow slowly,” Johnson said. “There really aren’t very many trees or shrubs that don’t have a fungus that is within their root system. Basically, they’re depending on that fungi, those hyphae, to pick up nutrients and bring them in because they are such a nutrient poor ecosystem.” 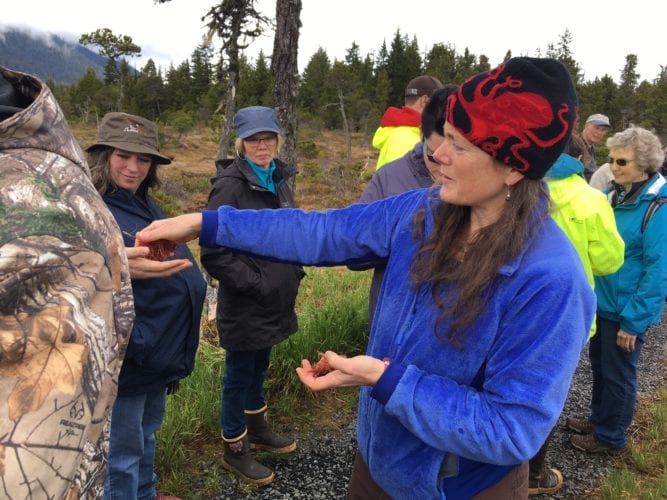 Johnson shows the group some of the large common plants like skunk cabbage and ferns. Then there is the Labrador Tea and the Bog Laurel. The Bog Laurel is blooming with pink flowers. The Labrador Tea will soon have a white cluster of flowers at its top. The leaves look similar, the laurel leaves point a little upward while the Labrador Tea leaves hang down a little. But only one of them is edible.

“So Labrador Tea, people will harvest it for tea,” Johnson said. “But you have to be careful because the Bog Laurel is poisonous. If you look on the underside of the Lab Tea it’s got this rust colored hair.”

“How poisonous is bog laurel?” someone asked.

“From what I know about it, it’s highly poisonous,” Johnson replied.

There are a couple of carnivorous plants on the muskeg that eat insects: the Sundew and Butterworts. And there’s the pale green coral-looking reindeer lichen.

Along the edges of the muskeg where there are more nutrients, the Sitka spruce trees start cropping up. Johnson encourages the walkers to pop some of the bright green spruce tips in their mouths. They are very high in Vitamin C, she says.

Although the muskeg is extremely slow growing, there are signs of recent change. Many of the short shore pines have some brown needles on them. Johnson says it’s a fungus that has grown in warmer years. She says it probably won’t kill the trees but it is stressing them. Time will tell.

For now, the group continues to ask Johnson questions about the plants that they find on the trail today.