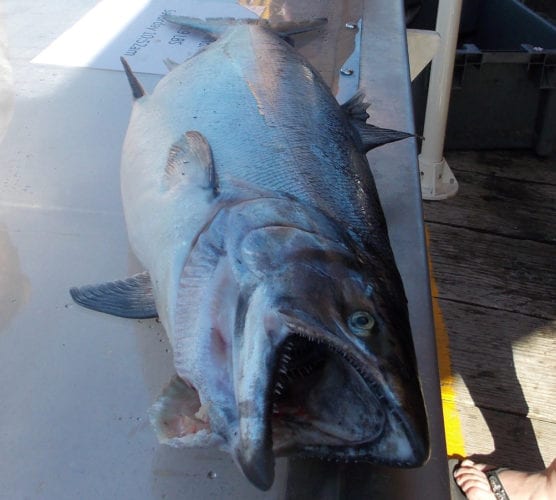 Part way through Wrangell’s salmon derby and just before the start of Petersburg’s derby, the Alaska Department of Fish and Game is closing sport fishing around the mouth of the Stikine River because of low returns of king salmon.

Patrick Fowler is the department’s sport fish biologist for Wrangell and Petersburg. He said early sampling of kings returning to the Stikine make it look like this year’s run will not reach the department’s pre-season forecast of 18,300 fish.

“As our in-season numbers are coming in all signs point to a run that’s going to be even potentially lower than last year and below the lower end of the escapement goal,” Fowler said.

The escapement goal of 14,000-28,000 is the number set by fishery managers to ensure enough fish make it back to the river to spawn. Fowler said it doesn’t look like the run will reach 14,000 and the department wants to protect as many returning Chinook as possible. The river flows out of British Columbia into Southeast Alaska and salmon there are managed under an international treaty between the U.S. and Canada. 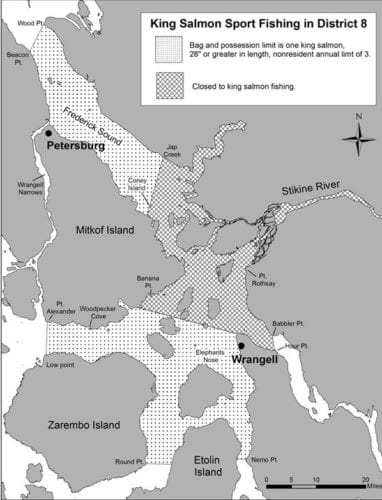 The newly closed area includes places that are popular derby drags for anglers in Petersburg, like Jap Creek and Coney Island and Banana Point. The waters just north of Wrangell are also closed. Fowler agreed this will be a tough closure for anglers fishing in derbies in both communities.

“People are going to feel the impact of this,” he said. “And you’re right, this is basically the area immediately adjacent to the Stikine River and the flats on both the north side and south side and this is some of our most productive area of District 8 where we see our highest sport catch rates and where we think we basically intercept most of our Stikine River king salmon.”

The remainder of district 8 waters around Petersburg and Wrangell remains open to fishing, with a one-fish bag limit. Some other districts in the area have a two-fish bag limit for resident anglers. With areas that are closed to fishing, some with a one-fish limit and some with a two-fish limit, Fowler encourages people to check the regulations before going out fishing. The closure information is posted at boat harbors and boat launches.

As for any good news on the fishing report, Fowler notes a decent forecast for hatchery kings returning to Crystal Lake south of Petersburg.