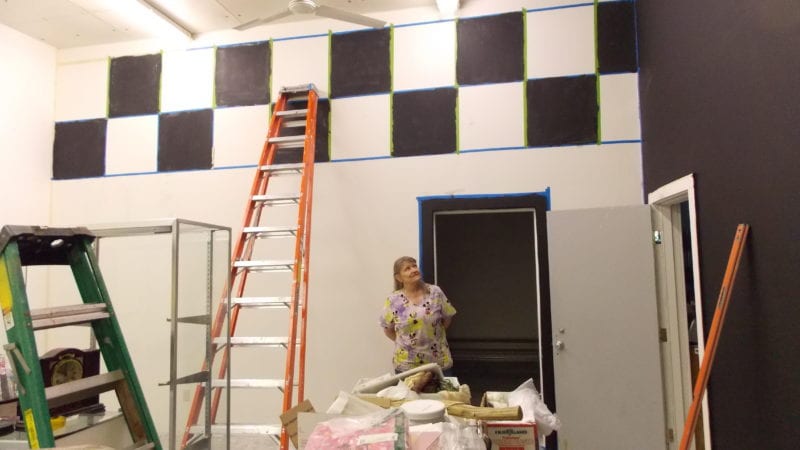 Petersburg’s first retail marijuana store hopes to open its doors as soon as next month. The owner of the shop on main street was approved for a state license in early April and has been working to remodel the building that also houses her restaurant and gift shop. She also hopes to obtain a license for growing pot in the back of that building later this year.

There’s a new wall up in the Fisherman’s Net Café, separating the restaurant and gift shop from the small space that could be Peterburg’s first pot shop. That space has ladders up and and new paint on the walls, still awaiting cabinets, shelves and front door and floor. Customers will come into the shop off a side alley.

Business owner Susan Burrell said she’s hoping to be ready for her inspection with the state by the start of next month. “We’re looking for them to come down here around the first part of June,” Burrell said. “So we’re hoping to be open by June 15. We were hoping for June 1st but things, you know how it goes.”

Burrell is calling the store “The 420”. It’s one of only a few addresses in Petersburg’s downtown area that fall outside of the state’s 500 foot buffer from schools, jails, rec centers and churches. The building used to be the salmon egg facility for Trident Seafoods, among other uses. In order to pass state inspection she’ll need to have a full security system in place, with eight cameras throughout. She’s hired a store manager and hopes to be hiring other employees. Burrell wants to be open for regular hours throughout the week. That’s been an issue for other stores around the state that have opened and quickly sold out of pot.

“We’re trying to be open all the time,” she explained. “See the marijuana shortage is ending. I mean there’s so many businesses out there, or so many grows, especially the little grows is where it fouled up because they were growing a whole crop and not planning to have some in another two weeks, every two months so. It made the shortage. But that’s gonna end really quickly.”

Burrell said she hasn’t agreed to purchase pot yet but expects to be able to from a grow business in Ketchikan. She expects a line of customers for the opening of her store and also expects a protest from residents opposed to her business.

Burrell also has initiated the application process for marijuana grow license from the state. She wants to grow pot in the back portion of the same building, in space that’s being used for storage. Burrell said another local resident, Chris Whittlesey is partnering with her to grow the pot in the back section of the same building, walled off from the pot store and restaurant. That business she’s calling Sea*Weed Farms and says she wants that grow business to be able to supply her retail store.

“I can provide everybody with the same great product everybody has at a very much more reasonable price,” Burrell said. “And if we end up with excesses then we can sell the excesses to the extractors and the product makers but there’s no product makers in Southeast. There’s an extractor that’s just starting up. I don’t know maybe my kitchen might not be just a restaurant for long, who knows what comes next. But that’s gotta wait. We gotta get this stuff going.”

If approved Burrell’s would be a larger grow facility than the Papke’s Landing business Southeast Moog Droog, which was the first licensed pot business in the borough. That company has a limited license with a 500-square-foot maximum for growing. That limit is not required for a standard license, which is what Burrell is pursuing.

“And mind you, 500 square feet is about half of this here room,” Burrell said in the front of her restaurant. “We’re doing a standard grow. So we can use every inch and iota of that 1000 square feet plus put a deck up there, you know what I mean, if we wanted for another 500. So, we should never have a problem with having a supply.”

Burl estimates she’s invested at least 30,000 dollars in her pot businesses so far. She’s hoping the state state board will take up her grow license application this summer and thinks she could be growing about a month after that approval.