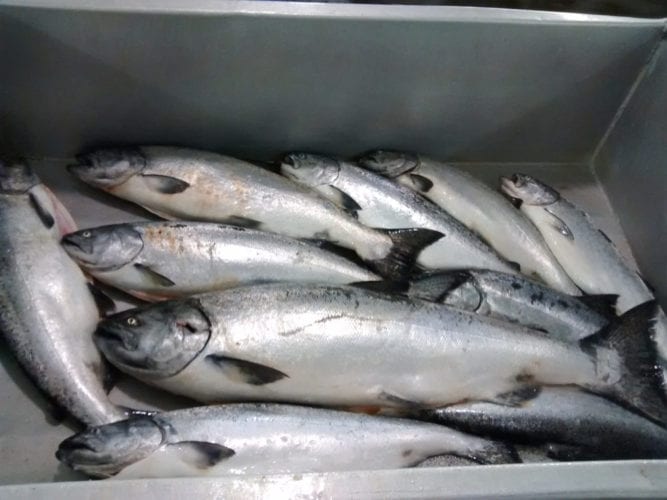 The spring season for commercial salmon trolling in Southeast Alaska is shutting down Monday, May 29 except for a few areas near hatchery salmon release sites. The spring season began in May and was to run through the end of June. However, poor returns of king salmon are prompting the closure.

King numbers are low for wild stock fish returning to the Stikine River near Wrangell and Taku River near Juneau as well as some other mainland rivers. Early catches of hatchery kings have not been strong either.

Grant Hagerman, the Alaska Department of Fish and Game’s troll management biologist for Southeast said region-wide the hatchery king catch has just been 14 percent of the overall harvest. That’s well below recent averages.

“Hatchery fish are also down as well in addition to those wild fish and so with these fisheries designed to target those hatchery fish, without really having many of those in the catch and concerns for those wild fish at this point, we felt like it was no harvestable surplus on those wild fish and any fishery, directed Chinook fishery for troll, or incidental harvest in other salmon fisheries, basically being the chum fishery that we wanted to limit that and basically closing this fishery does that,” Hagerman explained.

Fish and Game does test fishing on the Stikine and Taku rivers to determine actual numbers of kings making it back to spawn. The department says record low numbers of Chinook are showing up in the two rivers. Neither river is expected to reach an escapement goal, or the number of fish that managers want to return to the river to spawn. Typically, kings from those two rivers make up 80 percent of the wild king salmon in Southeast Alaska.

The season is closed starting Monday, May 29th until further notice. Hagerman said this is a first for a region-wide closure.

“This has happened in individual spring areas,” he said. “We did have an area near Ketchikan last year close for several weeks for this for conservation concerns. But a region-wide closure for a fishery like this has not happened before.”

Fishing remains open in some terminal harvest areas around the region, where hatchery salmon are returning. Those are at Neets Bay north of Ketchikan, Anita Bay near Wrangell, Port Armstrong and Hidden Falls on Baranof Island and Deep Inlet near Sitka.

The troll fleet’s quota, set under an international treaty with Canada, is not impacted by the closure. Pacific Salmon Treaty kings not caught in the winter and spring seasons will be carried over to the summer season in July.