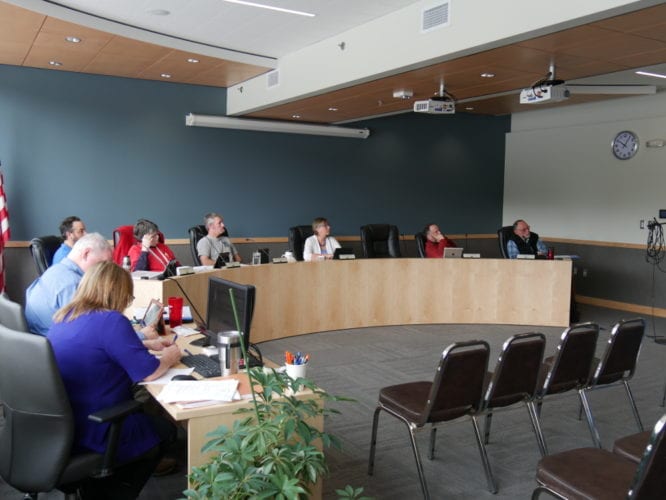 Petersburg’s borough assembly Tuesday approved a budget for the upcoming fiscal year that starts in July. Assembly members made a few changes to the final spending plan and didn’t have the votes to overturn an increase in the property tax rate approved earlier this month.

One of the final changes made to the borough’s spending plan was to remove funding for a lineman in the electrical department. That’s a position that has gone unfilled in recent years, but outgoing power and light superintendent Joe Nelson had asked to hire someone to help with electrical department projects.

The position was voted out unanimously with little further discussion. The assembly can add funding back at any time with three readings of a supplemental budget.

Next up was a discussion about cutting a new part-time computer and technology person.

The borough contracts with a company called PCS in Iowa to do computer work remotely. Staff proposed hiring someone locally to augment that remote work. Public works director Karl Hagerman thought it was a good idea.

“A lot of things probably could be handled in short order by a local,” Hagerman said. “And there are many hardware issues that come up from time to time that would be helpful to have a local person on staff. I don’t believe it needs to be a full time person. And PCS is still very valuable but the combination of those two things I think is valid.”

Assembly member Lynn asked if the borough could do an assessment of computer work needs that could be covered by the outside contractor or local hire. Others on the assembly were interested in contracting work out locally, as well as remotely, or looking at other options besides a part-time hire. No one made a motion to remove or move that funding in the budget.

Then the overall budget was approved in its third and final reading on a 6-0 vote. But the assembly was not yet done with it. Following a break, Lynn made a motion to reconsider the budget’s reliance on Secure Rural Schools funding for part of the 1.8 million dollar local contribution to the school district. Secure Rural Schools is a federal payment that the borough has received in the past but still needs re-authorization in Congress to continue.

“So I would like to hold it, use the Secure Rural School money rather than later on, than raise the mill rate,” Lynn explained.

Lynn thought the federal payment had a good chance of getting reauthorized. The borough has stockpiled past payments from that source in hopes of making it last longer, anticipating an end to the payment. His proposal was to spend another 140,000 dollars of that money, with an eye toward overturning a property tax rate increase approved at the assembly’s last meeting.

Assembly member Nancy Strand wanted to keep that part of the budget as proposed. “I am in favor of keeping SRS funds at 400,000 to stretch them out longer, a few years, a couple years, in case we don’t get Secure Rural Schools funding,” Strand said.

The vote was split on that one 3-3 with Strand, Kurt Wohlhueter and mayor Cindi Lagoudakis voting no and it failed. That meant the assembly would not be considering a resolution later on in the meeting to reconsider that property tax increase.

Following that, Wohlhueter made a motion to reconsider the funding for the hiring of a part-time computer position. He wanted to move that money to the borough’s professional services budget and look into contracting out that work, locally or remotely. That also failed on a split 3-3 vote with Wohlhueter, Eric Castro and Lynn the three yes votes.

The assembly had letters from the public asking to restore funding to Petersburg Mental Health Services but did not make that change. Mental Health’s funding from the borough, reduced in the current year’s budget, is zeroed out for the upcoming year.