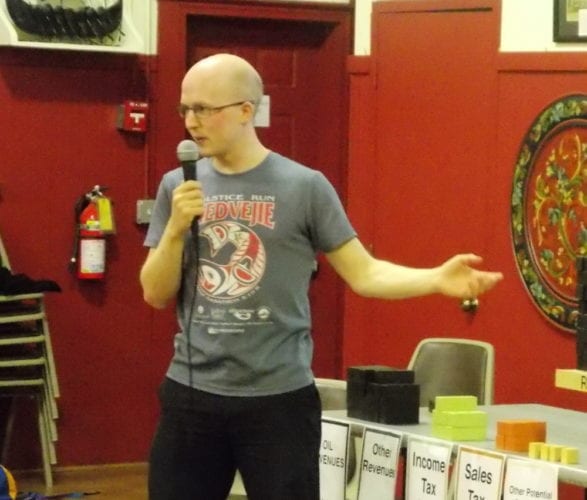 Sitka Democrat Jonathan Kreiss-Tomkins explains Alaska’s budget crisis during a presentation at the Sons of Norway Hall in Petersburg in 2016. (KFSK file photo)

State legislators representing Petersburg in the House and Senate expect some compromise on the state budget impasse with just weeks to go before a shutdown of state government. Conference committees made up of representatives from both chambers are meeting this week to work toward an agreement.

The state government has sent layoff notices and faces a shut down in July if the legislature does not pass an operating budget. Different agencies this month started sending out information on the impacts of a shutdown if that’s allowed to happen.

“A shut down is going to definitely negatively impact Bristol Bay and the beginning of our salmon season for seining, along with king salmon fishing,” said Sitka Republican Senator Bert Stedman. “It’s unacceptable to coastal Alaska.”

Stedman, who represents southern and central Southeast Alaska, explained that the state doesn’t start saving money with a government shutdown next month, but instead will wind up with a bill of hundreds of millions of dollars. He expects there will be a compromise in the Capitol building at least on budget bills.

“A compromise means you don’t get everything you want,” Stedman said. “And the Senate is willing to compromise. You know we wanna work a compromise with the House that the governor will support.”

Stedman is a member of the Republican controlled Senate majority. That caucus has supported a fiscal plan for the state that includes use of the Permanent Fund to pay for state government, a spending cap for the state and budget cuts including a five percent reduction to school funding. Stedman thinks a cut to the Base Student Allocation, or per pupil funding to school districts, will be difficult to enact.

“If you’re going to reduce education, which I don’t think has been done that I’m aware of, the BSA, you really need a year’s notice because of contractual arrangements with the staff,” he explained. “So I do not expect those reductions to be delivered. Also on the operating budget, the governor has to agree. He has a very strong hand because he has the veto pen. And normally the operating budget is fairly close to whatever the governor wants and I don’t think the governor is very close to those reductions.”

Stedman opposes the House’s proposed income tax and he supports a percentage of market value approach to using the Permanent Fund to pay for state government. But he thinks the legislature this month should just be focusing on passing an operating budget.

“These other items, if it’s an income tax, a sales tax, restructuring the Permanent Fund all could be done after the first of July if need be. It could be done next winter. But what can’t be allowed to happen is for the legislature not to have an operating budget for the state. And frankly it needs to be done before the first of July,” Stedman said.

Stedman’s colleague in the House, Sitka Democrat Jonathan Kreiss Tomkins is a member of the House Majority coalition which approved a plan including use of the Permanent Fund and an income tax.

“The House passed a complete fiscal plan, not pleasant, definitely painful,” Kreiss-Tomkins said. “Arguably it could be tweaked in any which way but it balances the budget and it’s a fully funded budget it doesn’t borrow from savings anymore.”

Kreiss-Tomkins voted for the House’s income tax bill which narrowly passed the House but was voted down in the Senate. Both chambers have supported making some changes to oil tax credits although there are differences between the two. And Kreiss-Tomkins said of all the proposed fiscal fixes the education cut is the one he finds least acceptable.

“It’s my perspective that the Senate’s five percent cut on education, while I think sincerely supported by some members of that caucus is largely a negotiating ploy to shift the frame of negotiation over,” he said. “And in the building it’s widely acknowledged the Senate doesn’t really believe in that cut and it’s just sort of a bargaining chip. And I think that’s a real shame because as a result of that people have gotten pink slips and districts are up in arms and not sure what to do and you can’t play with people’s lives like that. And so I find that unacceptable.” He doesn’t think the education cut will survive negotiations. Like Stedman, Kreiss-Tomkins is also optimistic for a compromise between the House and Senate.

“I think cooler heads prevail,” Kreiss-Tomkins said. “I know the governor would like to see as much of a full fiscal plan as possible and I know the House would. You know the Senate’s coming at it from their perspective but I think we’ll get there.”

Depending on solutions agreed upon or not, the approval of the state budget could take the votes of three quarters the legislature to use savings in the Constitutional Budget Reserve. A plan requiring that would need support of some minority members in the House and Senate.