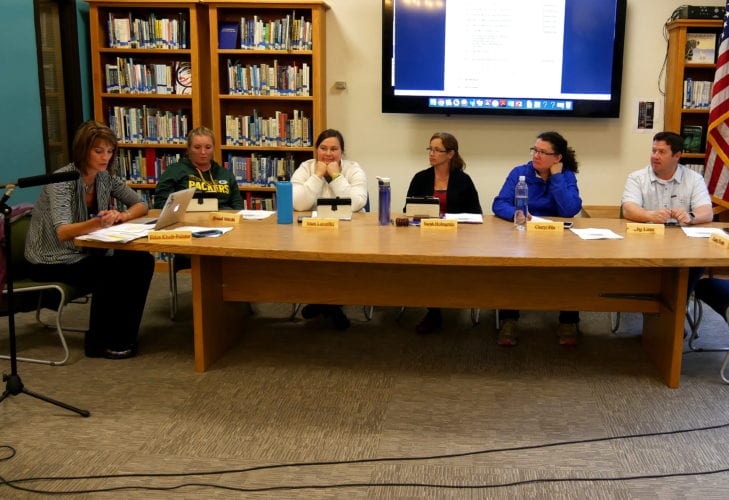 Petersburg School District at its meeting Tuesday night passed a budget for the next fiscal year even though the state legislature is still hashing out its own budget in special session. As Angela Denning reports, the local district is positioning itself for possible cuts.

The word that was repeated over and over again at the school board meeting was “conservative”.

“I’m always conservative when I approach the budgeting,” said the school district’s Finance Director Karen Quitslund. “I’d rather start out conservatively and do a revision and put more money in the budget.”

Quitslund presented three budget options to the board. One was for a scenario of flat funding from last year. The others were for 5 percent and 2.5 percent reductions in funding.

She told the board that a 5 percent budget reduction would be a decrease of about $280,000 to the school district. It would require dipping into the fund reserve for at least $20,000.

Quitslund says that the school district has been so conservative financially that they could survive that type of decrease.

“Can the school district function? Yes we can,” she said.

But she warns it would mean a bare bones budget.

“We will have nothing saved for contingencies,” Quitslund said. “We will go into our fund balance because there’s things that happen throughout the year that we can’t anticipate such as long term subs, we can’t anticipate that. If something happens and we have a really cold winter, there’s no contingency there for if we have a really cold winter.”

Quitslund says the flat funding option would be the best case scenario given the climate of the legislature. It would mean the same funding as fiscal year 2017 and require the district to use at least $10,000 in reserves. Quitslund steered the school board away from this scenario because she says they could always add in more funding later.

“It’s a lot easier to give somebody money for their supplies or their budget than to take it away,” Quitslund said.

She suggested the board approve the budget calculated for a 2.5 percent budget reduction. That would be a state funding cut of about $140,000.

“I feel like it is a really conservative and safe budget for the district to adopt,” Quitslund said.

The budget would make increases for substitute teachers and the maintenance department. The teaching supply and curriculum budgets would be a little less. And there is also some money for professional development. Quitslund says she is confident in this budget and calls it survivable.

“Compared to our 5 percent reduction, we have cushion in this budget,” Quitslund said. “It’s not so bare bones.”

The school board passed the budget with a 2.5 percent reduction unanimously. Chairwoman, Sarah Holmgrain says it’s hard to predict what will happen at this point.

“I’m pretty comfortable with the 2.5,” Holmgrain said. “It feels like it’s just throwing a dart at a dart board since we don’t know what the legislature’s going to do.”

The approved budget has the school district’s revenue and expenditures at just over $8.5 million with a difference of about $17,000. That amount would need to come out of the budget reserve.

Superintendent Erica Kludt-Painter says that the district is understaffed in the high school’s special education department but it’s not possible to hire anyone without knowing what’s going to happen with state funding.